On paper, it’s one of the most impressive games we’ve ever encountered. But in practice, Black Flag leaves us slightly disappointed.

We never expected to encounter a game that genuinely gets sea shanties stuck in your head, but that’s exactly what Assassin’s Creed IV: Black Flag has done.

A prequel to last year’s Assassin’s Creed III, Black Flag offers players much more of the seafaring, piratical action that made the last game actually interesting (because the rest of the action didn’t).

Almost immediately you’re given a giant map to explore, taking in a fictionalised version of the West Indies in the golden age of piracy and allowing you to sail, plunder, pillage and pilfer as you see fit.

Don’t worry – these are more your friendly, yo-ho-hoing Errol Flynn-style pirates than they are the walking horror films that really existed back then. 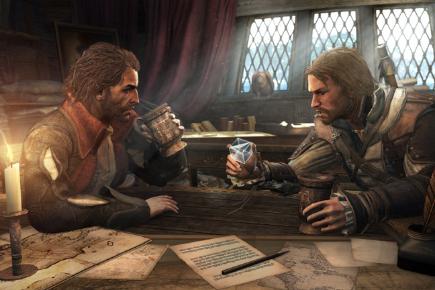 It’s a fun setting and is helped in no small way by the technical marvel that is the game world – it’s all open, you rarely see a loading screen (except when you enter bigger townships) and there’s always so much going on.

Ship-to-ship combat, diving for treasure, finding buried chests on desert islands, whaling (nauseating as that element is) and general piracy on the high seas – it’s fun, in the most part.

Then you get back on land, to the world of traditional Assassin’s Creed experiences, and it all falls apart at the seams.

Yes, there’s a lot to do – and yes, you can lose yourself in the game for dozens or even hundreds of hours should you see fit. But so much here is just empty filler. Very little you do has a purpose, even by the gaming industry’s standards of padding things out.

The central mechanics are as clunky and rage-inducing as they’ve ever been – including still hardly having any ways of staying hidden in a game that really should have a more robust stealth system, and combat that still – still – involves nothing more than, for the most part, standing motionless, hitting counter then attacking back. 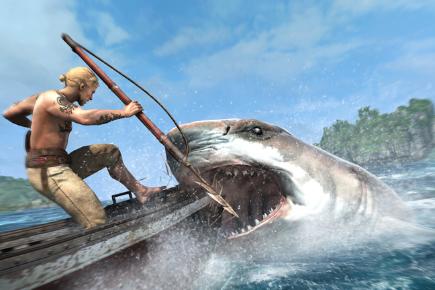 And the parkour/free-running way of navigating the world which was once exhilarating is now just a mind-numbing exercise in holding down forwards and the right trigger.

Black Flag is padded, simplified to the point of being lobotomised and struggles to be engaging for long periods.

That is at least until you get back out to sea and the freshness hits you again, the fun comes back and you do find yourself spending a few hours with the game.

Assassin’s Creed IV is a technical marvel. It’s a fantastic game to look at and is absolutely packed to the brim with things to do, even if a lot of it is padding and filler.

But it’s also part of a series that hasn’t progressed very much at all. While its seafaring and pirating is good fun, the central experience is still the same as it has been for years – and that makes it all a bit of a let-down.