From the creator of Heavy Rain comes what is probably the best movie-styled game of this generation – but that’s not saying much.

Beyond: Two Souls is the latest product of auteur designer David Cage's overweening filmic ambitions. It's a game made with two A-list Hollywood actors – Ellen Page and Willem Dafoe – and an astounding level of realism, truly showing off what computer graphics can look like.

In fact, it’s probably one of the best-looking games ever made on PS3.

The story follows Jodie and her poltergeist companion called Aiden, hopping around in time as she grows from haunted five-year-old and manipulative teenager to CIA operative and homeless fugitive.

You control both characters, mostly through ‘quicktime’ prompts – that is, pressing particular buttons as and you are when told to.

It's depressing given this ambition that the game isn't very well written and follows a linear track that the player really can’t influence.

Having said that, there’s plenty to do, including fighting, horse-riding, climbing, possession, telekinesis and shooting. 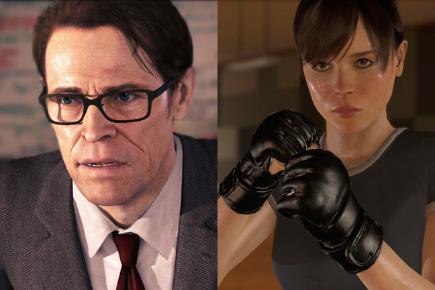 It’s just that much of it – especially in the early game – is so basic as to be boring, performed through immersion-breaking button-presses, and irrelevant to the outcome of any scene.

For example, there’s a two-player-mode available – one person controls Ellen's telekinetic Jodie and the other her paired poltergeist, Aidan.

But given that the game seems to just split the slow-paced single-player mode in two for this, there's really very little for each person to do given the length of the cutscenes. The other person just... waits.

And the game is mainly cutscenes. It is, essentially, a return to the sort of interactive movie that was semi-popular in the early 90s.

A good example is an early scene where Jodie is invited to a small birthday party – it’s a classic horror movie idea – but it jumps rapidly and clunkily from her arrival to a dancefloor kiss to a scene where the bullying party pals demand Jodie shows her powers to where they lock her in a cupboard and call her a witch.

The dialogue here never rises above Hollywood pastiche, though both Page and Dafoe manage to make it shine.

Player influence is also at a minimum. Failing an action mostly allows you to carry on – in the few places it doesn’t, repeating a section, such as a fight during a montage, is both boring and frustrating.

Given that simplicity, the game would be ideal for a younger audience – if it wasn’t for the violence and gore which studs some of the sections and earned Beyond a 16 rating.

Despite that, where the game is original is in its choice of themes. Telekinesis itself might be a touch B-movie, but the longer chapters – the Navajo ranch and the homeless section particularly – are diamonds in the rough, introducing the sort of moral awareness that many games lack.

If you’re looking for a game that shows off what the PS3 can do, look no further than Beyond: Two Souls. The set design, character animation and visual effects are second-to-none.

The plot may be a little iffy - especially given how it sets up a sequel - but if you want to watch an interactive movie, you won’t find a better one.