Broken Sword 4 was seven years ago – is this a classic series worth reviving? All sinister prophecies point to yes.

It's the kind of pretty you stare wistfully at through train windows, your dreamy gaze misted up by longing (and the occasional handprint).

A fairy-tale-ish, unreal kind of pretty that makes you happy to nod along and accept whatever lunacy its world is currently asking of you. It's okay. Things just work like that here. Everyone carries Hawaiian pizza in their pockets.

You know, just on the off chance it comes in handy.

If you've played a point-and-click game before, you know how to hum that tune - pocket everything that isn't nailed down. If it is, pocket the nails. Use them to build a very tiny trebuchet. Re-enact an ancient crime scene and uncover the terrible truth (hidden for centuries by the cult of Rasputin) that William Wallace built Stonehenge in 1296.

Or possibly that's just the Broken Sword series, but The Serpent’s Curse definitely continues its proud tradition of stonkingly ridiculous conspiracies that even Dan Brown would find implausible. It might have taken seven years to reach our screens, but it's everything a fan could hope for.

(Except for the bit where we have to wait until January to get our greedy hands on part 2, with this only being the first part. But hey, afer seven years – what's another four weeks?) 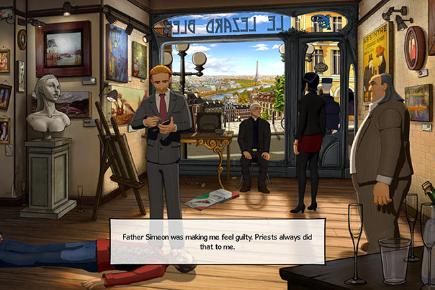 George and Nico, our beloved main characters, are back and there's trouble on the streets of Paris. Again.

There may – shhh! – even be some kind of ancient and sinister group behind it. Again.

Other old acquaintances soon start dropping by and it's lovely to see them, back out of the box and dust-free after so long. There are plenty of little references for us old-timers too, tucked away in discreet little corners and waiting for our eyes.

This might sound inhospitable to new players, but it's not – the cast is deftly drawn, lively and funny, and you needn't have played any of the other Broken Sword titles to enjoy this one.

Although you should, because the 1996 original - Broken Sword: Shadow of the Templars - is crying out for the comforting arms of your hard drive.

The game's single major flaw is that sometimes puzzles creep over the line between 'annoyingly fiddly' and 'you are extracting the Michael', but the extensive hints system keeps it from tarnishing Broken Sword 5's glittery tiara. Knocks a couple of sequins loose, maybe.

Broken Sword 5 is fun. It's silly and frothy and sweet, like a frappé on a sweltering Sunday afternoon. It's not complicated and it's not sophisticated and it's certainly not a budget-breaking blockbuster, but it makes you feel better for having played it.

It's also a damn good addition to a series which already boasted some damn good games.