Can the Belmonts breathe new life into this age-old tale of death, demons and Good versus Evil? Apparently not.

At first, we knew where this Castlevania: Lords of Shadow 2 review was going - we hated it.

The backdrops, though initially impressive, are forgettable, the battle sequences are horribly repetitive, and some of the stealth sections are - well, just horrible.

Two days - and many death scenes - later, however, and things became a little more complicated.

And we’re not just talking about the storyline.

Centuries after the events of the original Lords of Shadow game, Gabriel Belmont (now rebirthed as Dracula) awakens in the present day, his once majestic castle now the foundations of a dark, damp, Dickensian city.

Forced back into an uneasy alliance with one Zobek (voiced by Patrick Stewart), Dracula sets off to reclaim his powers and fight the return of Satan and his army of acolytes, some of whom have woven themselves seamlessly through our world.

Nope, it’s not a particularly original story - and to be honest, neither are the set-pieces, all of which you’ve probably seen before in one form or another in similar third-person combat games like Devil May Cry or Bayonetta.

Dracula’s journey is a dark one in both tone and tale, but while much of it does come across as more theatrical than terrifying, some foes are fantastically creepy, and there’s plenty of gratuitous, bloody spurts, stabs and cinematics to engage gore junkies. 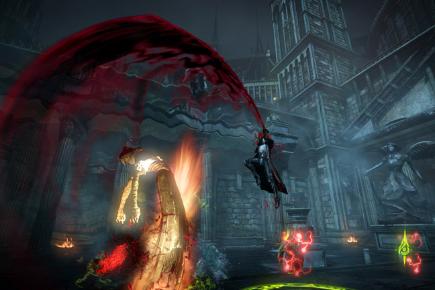 But Castlevania: Lords of Shadow 2 is not a game for the beginner. Crude and confusing, there are several early battles where you might find your combat skills sucking more than Dracula himself.

Yes, the game feels easier the further you progress (owed mainly to your burgeoning weaponry and upgradeable powers), but it remains ‘bloody’ brutal to the end.

The trouble is, the game lacks consistency, telling you both too much and too little at once. Early boss battles boss battles are, as you might expect, suitably overwhelming in scale and scope.

Markers and objectives are explicitly spoon-fed throughout the game, and yet you can spend twenty minutes standing atop a speeding train with no idea what to do next if you fail to notice an open window beneath.

Wander in a little farther, however, and you might begin to appreciate Castlevania: LoS 2. The game is surprisingly generous in depth, offering stealth, secrets and - naturally - hack’n’slashing in healthy doses.

Dracula can evaporate into mist to slip through gated doorways, possess rats and people to gain entry into secured passageways, or parkour his way around buildings, towers and convenient scaffolding to sneak around undetected.

There’s a lot to know, and a lot to gain - particularly if you’re fond of off-the-path exploration.

Is Castlevania: Lords of Shadow 2 a bad game? Nope, not really. But it’s also nothing new, and the convoluted storyline and derivative combat will often remind you of that.

All we can say is persevere - get to grips with the combat, seek out your Pain Box upgrades and keep going: there’s a sting at the end of this tale.