Should you let Thief get its fingers into your wallet? We'd leave the door unlocked and invite it right in.

First question: does Thief work as a game?

Second: does Thief work as a reboot?

Right, we're done here. Pack up your things and leave in an orderly manner.

Wait, what? You wanted some kind of review? Oh, fine. Thief is a game about rooftop-racing, making snarky remarks and stealing stuff from rich people. And poor people. You're very even-handed about where you put your sticky fingers.

And you will put them absolutely everywhere – not like that, you dirty little beggars – because once you know there's something there to take, you can't walk away from it.

Eight guards, all staring at the object of your intentions and cracking their knuckles meaningfully? You don't care. It's there. You want it.

And you're going to have a variety of ways to get it. Carefully stalk and bludgeon every single guard? Throw a glass and watch their heads swivel? Spend 20 minutes nipping between shadows so you can claim the oh-so-vaunted Smug Prize of a no-knockouts run-through? Check, check, check.

What you can't do is straight-up slice through them like Jack the Ripper's less-stable cousin. 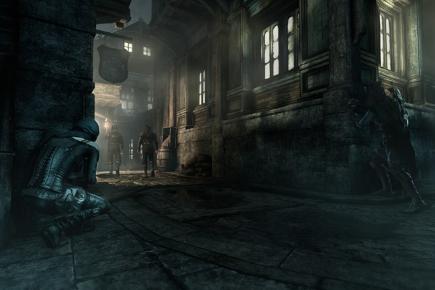 The lead character, Garrett, is very much a 'float like a butterfly, die like a bee under a Doc Marten' fella, and the developers make sure you know it. If you want to kill somebody, you do it from the shadows with a flying pointy stick – just like any ‘honourable’ man would.

All this thieving, parkouring and wisecracking takes place in a dark fantasy medieval city that's suffering a bad case of plague.

(Hush up. Dishonored was a plague-ridden dark fantasy Victorian city.)

It's ugly and battered and looks as though it'd go up like a tinderbox. You'd be scared to touch the walls in case you got scurvy. Everything and everybody is miserable and you're perched up on your rooftop, looking down at all of it.

It's the perfect place.

Perfect to climb, perfect to explore, perfect to fear. There's a grimy revolution brewing on those grimy streets, and it's better to be up here than down there.

But the one answer still left to be given is: how does it stand as a reboot?

It stands – crouches, really – on both feet, behind a box, eyeing up a nobleman's purse. This Garrett isn't the Garrett of Thief 1-3, exactly, but he's in there. This is the Garrett who turned left, somewhere in his life, where the Garrett of old turned right.

Thief is horror-tinged goodness with a cheesy bent. It's pulpy, grubby and gorgeous, and you'll waste hours in its alleyways and even more on its rooftops. Get caught up in it – just don't get caught.