What is a Cobb salad and how did it get its name?

You may well have heard the name and you might even have eaten the dish. But do you know what Cobb salad is - and how it got its name?

You’ve got to hand it to Americans, they know how to make a salad interesting.

The Cobb salad, invented in the US between 80 and 90 years ago (depending on whose account you choose to believe), certainly has plenty going for it in the flavour stakes.

Learn everything you need to know about the Cobb salad – and how it got its name.

What is a Cobb salad?

It’s a salad usually served as a main dish, due to its many constituent parts which should include boiled, roasted or grilled chicken, crisp bacon, hard-boiled egg, avocado, Roquefort cheese, tomatoes and crisp salad greens (technically, iceberg and romaine lettuce, watercress and endives).

Plenty of minor variations exist – Stilton often replaces Roquefort in the UK, for instance, and pancetta may be substituted for bacon – but the main ingredients stay roughly the same.

[Recipe: Halloumi, carrot and courgette salad with ginger and sesame]

Why is it called Cobb salad?

A number of explanations have been mooted for this, but the basic story is that the salad became a signature dish at the Brown Derby restaurant in Hollywood, which opened in 1929.

Some argue that the salad was created by the restaurant’s executive chef Robert Kreis in that same year, and named after the restaurant’s owner, Robert Cobb, cousin of baseball legend Ty Cobb.

Another version says that Robert Cobb himself invented the salad in 1937. Coming into the restaurant kitchen to make himself a quick meal one evening, Cobb grabbed whatever came to hand from the fridge, including blue cheese, cold chicken and salad greens. He asked the chef to throw in some bacon.

With Cobb that evening was Sid Grauman, co-owner of Grauman’s Chinese Theatre – a Hollywood landmark and Academy Awards ceremony venue on three occasions. When Grauman returned to the restaurant the following day, he asked for a ‘Cobb salad’ – and so the dish was born. 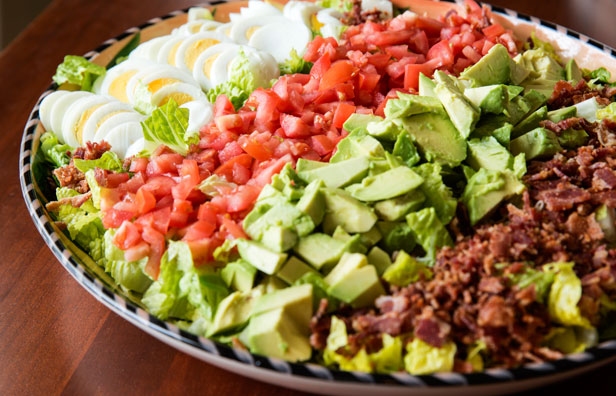 What else should I know about a Cobb salad?

As originally served at the Brown Derby, all the ingredients should be finely chopped – the salad greens were cut so finely they slipped between the tines of a fork – and arranged in striped layers over the top of the lettuce, as in the image above. The dressing first used on the salad was red wine vinaigrette.

There are many variations to be found online; one suggests adding lobster meat instead of, or alongside, the chicken, or for a fully vegetarian option, try using chickpeas and soy bacon instead of the meat.