Becoming an elite athlete takes more than just talent. We asked nine professional athletes how they built up their resilience and what keeps them motivated.

Ahead of this year’s Müller Anniversary Games, we caught up with seven athletes to find out how they stay resilient throw all the ups and downs. 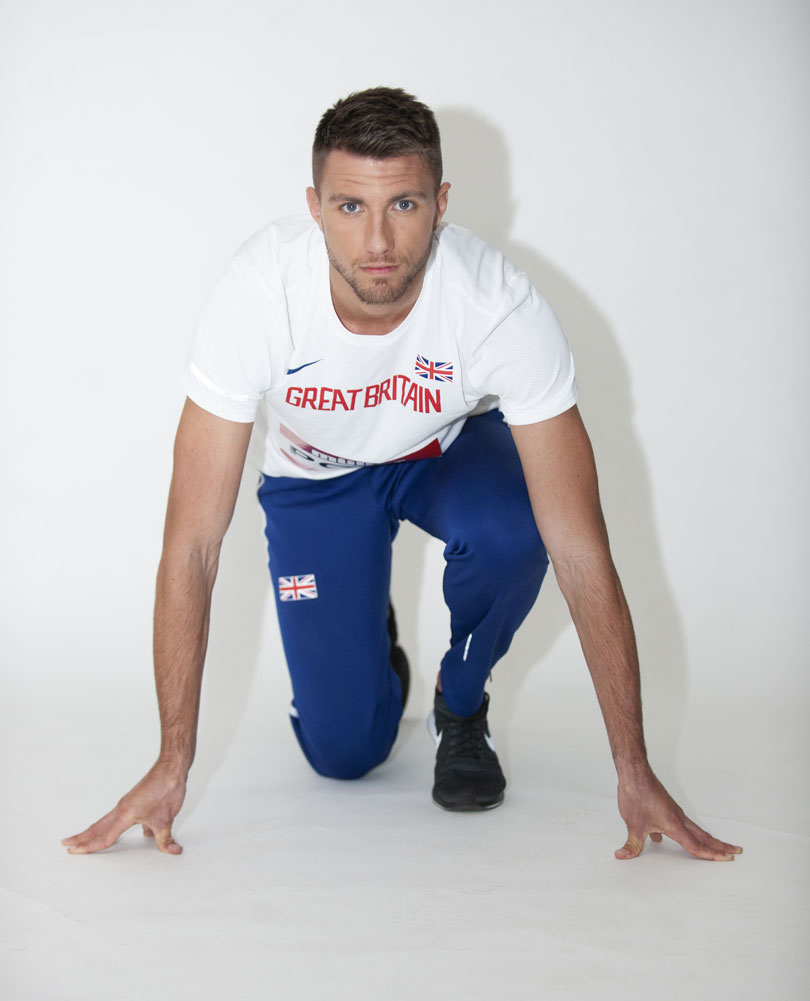 25-year-old Andrew is the current World and European Indoor Champion in the 60m hurdles.

“When you’re injured, you’re incredibly stressed because you can’t do what you love. You’re not racing, you’re not training, your life changes entirely. Our release as athletes normally is exercise so when you can’t do that, that’s what makes it all the more difficult,” he explains.

“I think resilience comes from being quite solid in your opinions. For me, I think a lot about training, my racing and everything to do with my performance so that all the times when I got injured and I spent a lot of time out, I always believed that if I could just get fit enough then I would come back and it would be worthwhile.

“In regards to coping with disappointment and setbacks, I think it’s just going back to why you started something. My resilience came in through long periods out with injury and having to come back and dealing with the disappointment of that and I never really lost sight of the root of why I was training and why I was trying to be an athlete and the enjoyment that’s associated with that and then when things get tough you go back to that and it’s like, ‘this is why it was worthwhile in the beginning, this is why it’s still worthwhile if I push through this’. 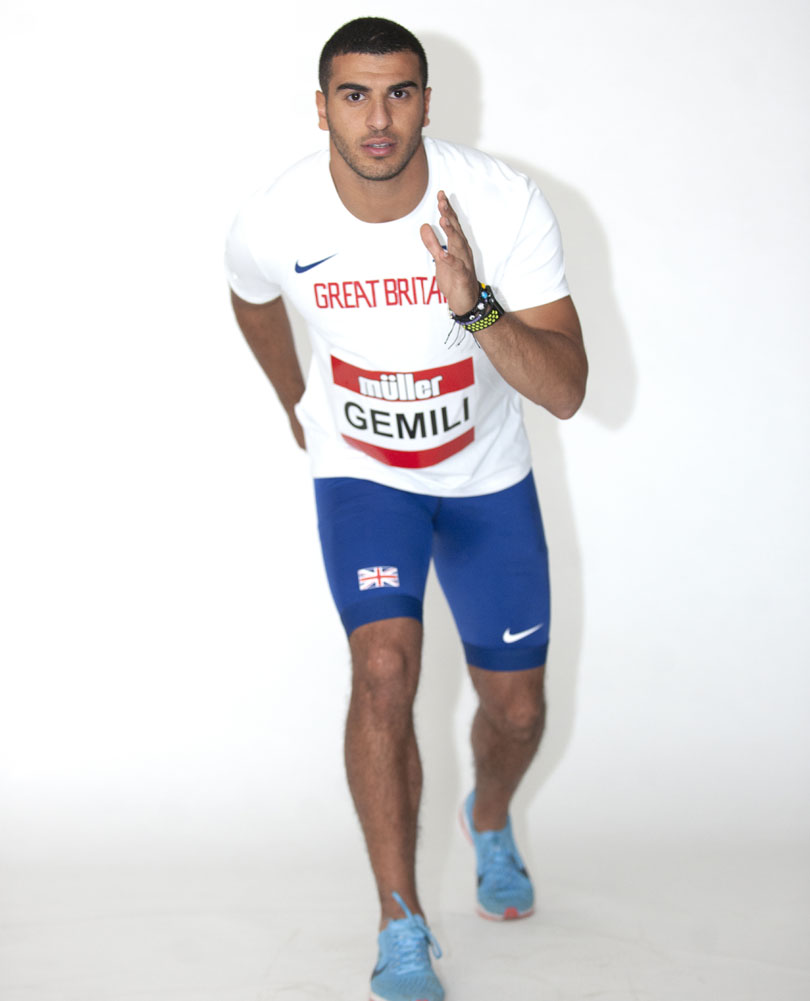 24-year-old Adam Gemili is a British sprinter and part of the 4x100m relay team that won the World Championship in London in 2017.

“I had to learn how to be resilient. I was 18 years old when I first came into the sport, it was London 2012 and I was running the 4x100m relay and myself and one of the other guys messed it up. We had a lot of abuse,” Adam says.

“It took me a while to get some perspective and realise how many opinions I actually care about. If my mum or dad say something to me or my friends give me a bit of stick, then I’ll take that on board. If someone else says something about me then actually realistically, does it change my life in any way, does it affect me? Not really.

“I guarantee you all of the athletes here, when they were younger, probably weren’t the best at what they were doing, up there but maybe not the best. At lot of us were coming second, third, fourth in races. You progress, you stay resilient, you don’t let that get you down, you work hard, you have patience and you become successful.” 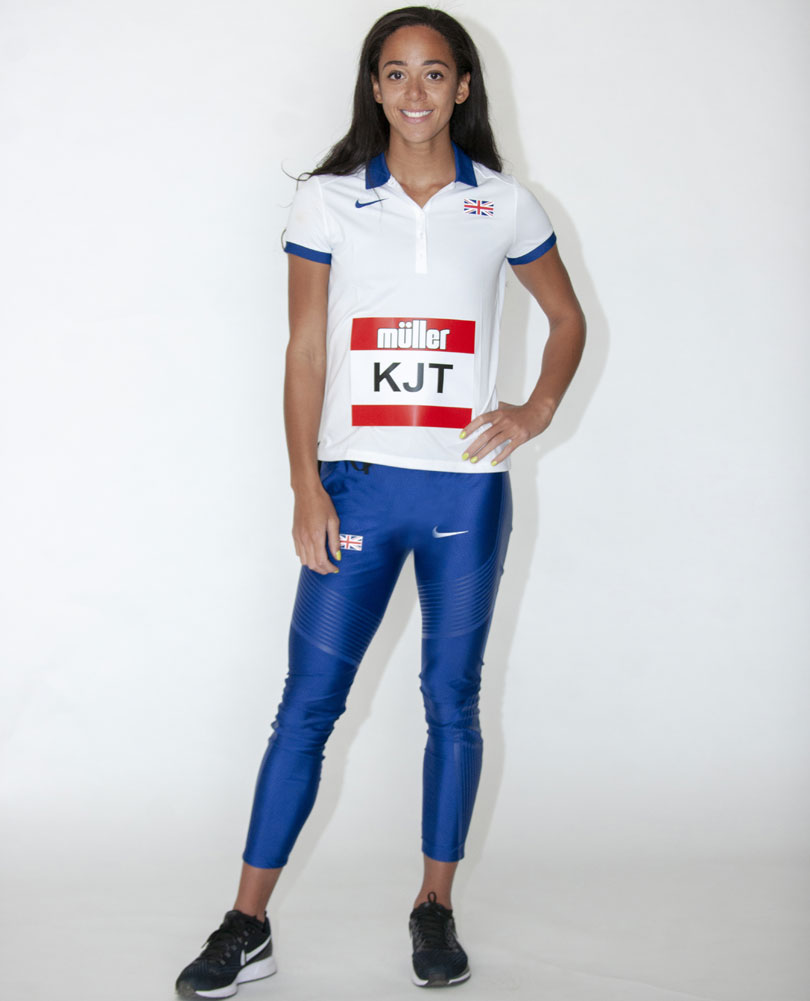 25-year-old Katarina won gold for England at the Commonwealth Games in the heptathlon and is world indoor champion in the pentathlon.

“I’ve had an up-and-down career and I’ve been talking about this to my mum a lot and it’s like when you start to do well it’s like that momentum,” Katarina says.

“When you’re doing well it’s very easy to bounce back, you’re happy with training, but when it goes wrong people try to say to you ‘it’ll make you feel stronger’ or ‘you’ll feel better when you win’, but half the time it’s just not going to happen that way.

“I think for me it’s just stubbornness. It’s stubbornness, not to prove to anybody else, but to prove to myself. For me, it was just like if I don’t finish my career doing this, this and this, I don’t know how I’m going to be able to live with that, so it’s just about making sure that I finish on a happy note so I don’t know how to explain that in a non-sporting way.

“Goal-setting makes it very easy for me to train and go through the things that I know I need to achieve this, this and this. Have goals. Goals keep me motivated.

“It does make you really strong because you’re able to deal with certain emotions in life better. If I hadn’t done sport, if I hadn’t experienced all these different setbacks and disappointment, I’d be living in a fantasy. The highs definitely match the lows for me.”

“I’m 31 now, I’ve been doing this since I was 18 and I’ve been going every year because I love it. You have to find something you love that you can keep pushing through, create a goal for yourself that you know you’re going to work towards,” he says.

“If you choose something that’s too easy then you’ll skip sessions. Try setting a goal and actually work towards it, something you know you’ll actually be inspired to push through. I get a lot of pleasure out of the journey, the end result is just a relief.

“Working towards something and knowing you’re getting better is what I get most pleasure out of. For me, I’d say set something that’s probably out of reach, and then when it comes good it’s like ‘oh wow’.” 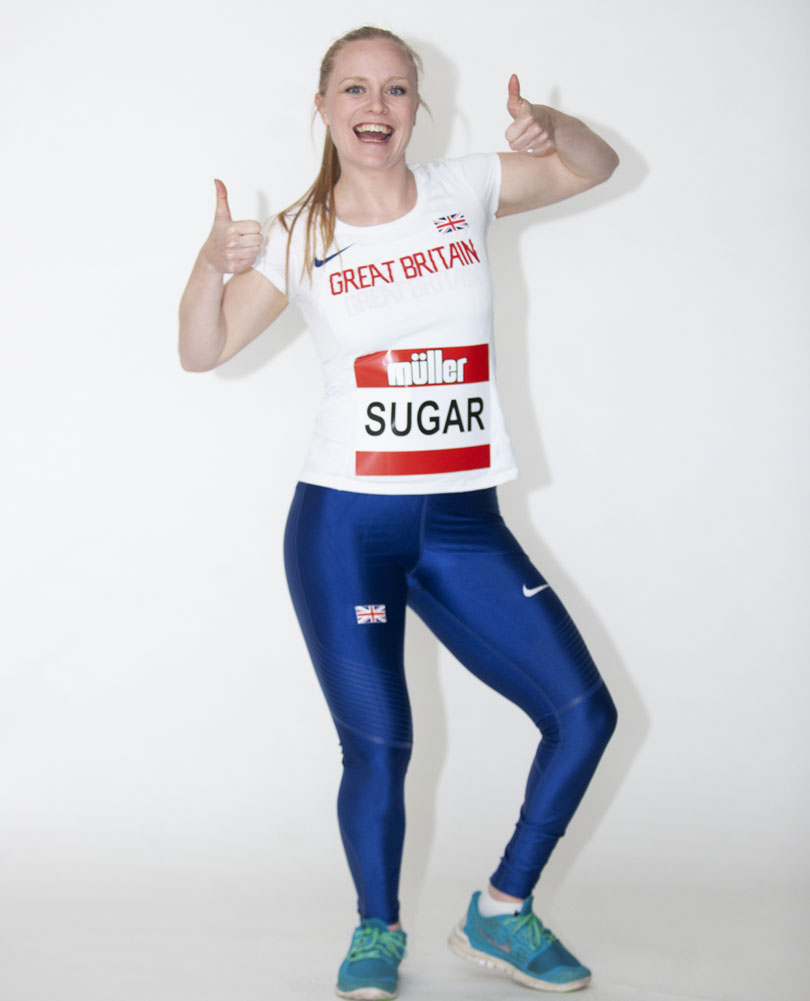 27-year-old Laura is a parasport athlete competing in sprints under the T44 classification. She won silver in the women’s 100m at the 2016 European Championships.

“Resilience is about knowing what you want,” she says matter-of-factly.

“If you know you want to do something and you set your goals then it’s realising that and trying to get back on track. I’ve had a couple of injuries and my worst injury was a couple of years ago and there were so many times I went through my head like ‘I’m never going to get back, I’m going to quit, I can’t do this’, but then you speak to your family and friends, speak to your coach, so talking to people definitely helps.

“Knowing what you want and if you’re going for that goal and you have a setback, but you still want to get there. That’s how you’re going to be resilient.

“You see loads of successful people or what you define as success and you don’t see everything else it takes to get there. Most of the people who are successful are just the ones who didn’t give up. Every single one of us here will have had setbacks along the way, some are quite big setbacks, we might have thought about it at the time but we then choose not to give up.” 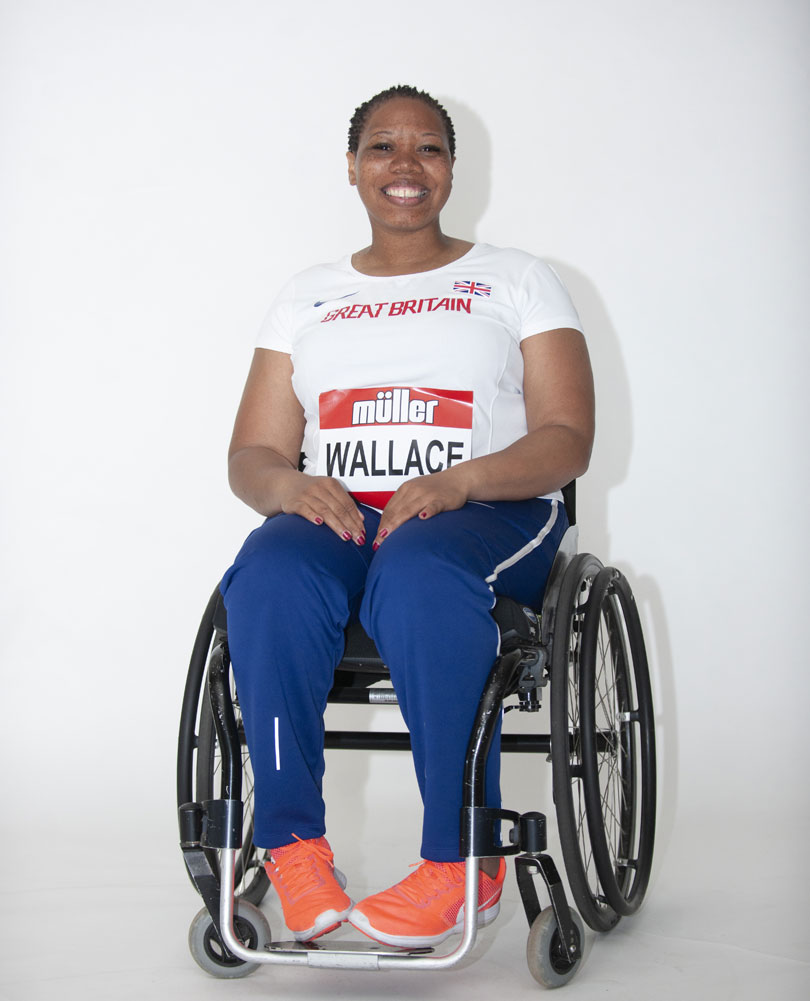 40-year-old Vanessa is a parasport athlete competing in the F34 shot put. She finished fifth in her first Paralympics at Rio.

“Sometimes you have to trust who is around you, yourself, and just know you can even if you don’t have an answer. 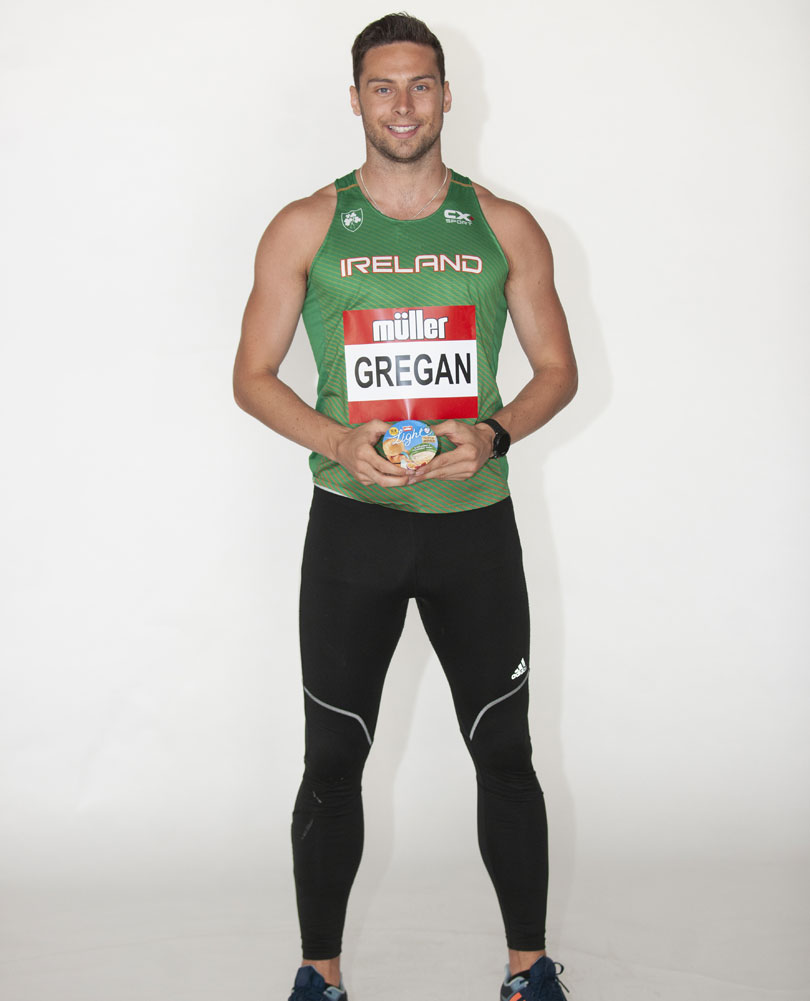 28-year-old Brian is an Irish sprinter and part of the 4x400m relay team that set a new Irish record.

“With athletics you get knocked so many times that you have to be resilient. For me, the biggest tip is never giving up,” Brian explains.

“That has to be the first one because you’re not going to get anywhere. Anything worthwhile in life isn’t easy. You don’t become Olympic champion or world champion or European champion by just by waking up one morning and going ‘ah that’s what I’m going to do.’

“Organisation is a big thing. It might not sound like it matches but being organised means you’re always on time. It builds up that resilience in yourself. It kind of cuts out all of those errors. Stress builds up if you’re late to training, you’re disorganised. I train with people who arrive to training 15 minutes late, stressed - they don’t get the most out of their session.

“If you can be the best you can be and look back after your career, that’s all that matters. For me, that would be an Irish record, I’m the second fastest man ever in Ireland at the moment and hopefully in the next year or two I’ll be the fastest. That’s my biggest motivation at the moment, to get that record. It’s something I’ve been chasing and dreaming of for years.”

Müller Quark now available in Asda is traditionally thick quark mixed with creamy, Mullerlicious Müller yogurt. It is deliciously thick and available in 3 SKU’s; Müller Quark Plain is high in protein and Vanilla & Strawberry are both a high source of protein.