Sprinter Dina Asher-Smith says being an Olympian is ‘totally attainable’: Here’s why

If Dina Asher-Smith can’t make you feel excited about getting involved in sport, nobody can. Here’s why she thinks you’re more athletic than you suspect.

I’m walking across the track at Charlety Stadium in Paris in the presence of elite athletes. We’re here for a bit of fun on a Muller sports day and about to take part in a 4x100m speed-walking relay race – the walking part is important – when I find out I have something in common with 22-year-old Olympic sprinter Dina Asher-Smith.

“I don’t know how anyone runs more than one lap,” she says, incredulously, “that’s vile, that’s disgusting.”

From that moment I was under her spell but sadly, that’s where our shared opinions on running begin and end because I cannot comprehend why anyone runs any further than onto the tube from the platform.

Though running might be my nemesis, it’s not stopped me from staying active as I found and fell in love with weightlifting instead. Helping girls find the right sport for them like this is another passion of Dina’s.

On her visits to schools to encourage more girls into athletics she starts by telling them “hey, I know it sounds wild but being an Olympic medallist is totally attainable.”

It might sound easier said than done, but Dina – who last year fronted a TEDx talk on how her fear of failure keeps her motivated – insists that she was fast but not the fastest growing up and it was hard work that got her where she is today, not talent alone. 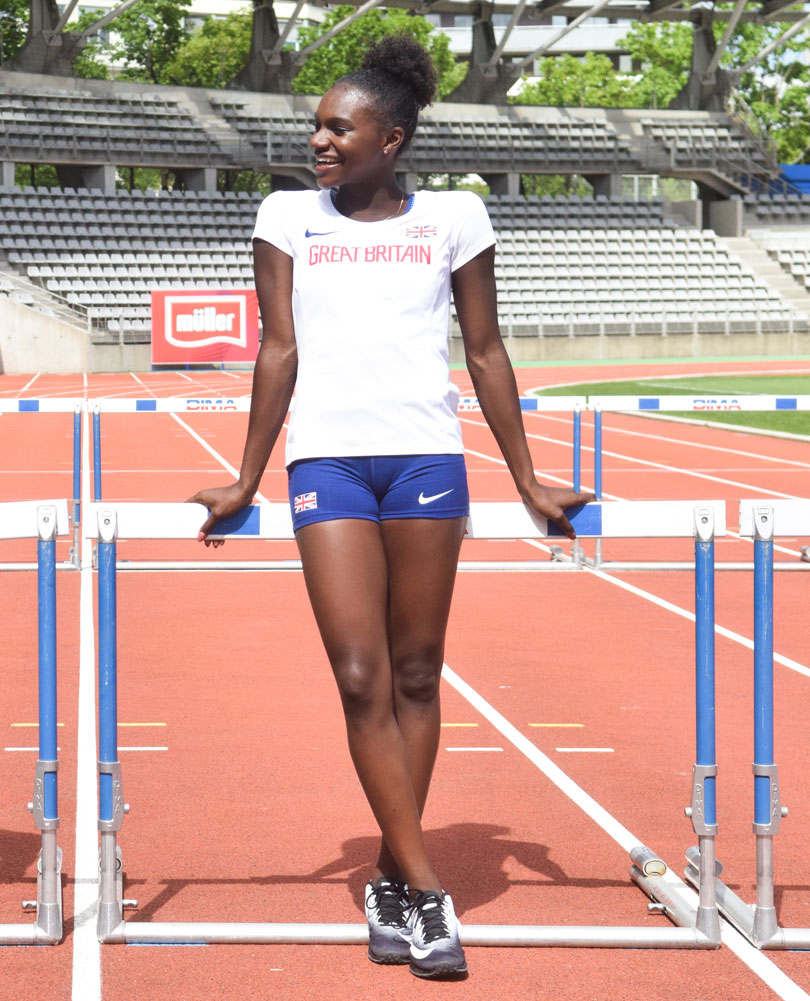 “The boys kind of laugh because now they’ve got jiggly bits and sometimes when girls are going through that period and getting so many pressures they don’t have the confidence so if you say ‘go on then, you can win this race’, they’ll go ‘I’m not very fast’.”

“Boys are brought up very differently to girls often, so boys, even if they’re not the most naturally gifted, they still think ‘I’m going to try, I can still do this’. Not all the time, I’m making very wild generalisations. Sometimes when they’re younger there are a lot more sports tailored towards boys. They go and do football a lot more, they stay more active generally.

“Girls see a big drop off when they’re around 13 or 14, especially when they tell you your options you can’t do football or rugby or cricket but you can do Zumba or dance. I watch people on TV play football, I want to play football. Can’t a girl kick a ball?”

She’s not wrong, according to Women In Sport, just 20% of girls aged 5-15 meet the guidelines of at least one hour of moderately intensive physical activity per day.

More female role models in sport – perhaps like Dina herself – can only help as currently women’s sport only makes up 7% of all sports media coverage in the UK.

“I get so happy when I see netball on TV because 50% of the population completely understands netball. We all understand that it is a really hard sport,” she says, sounding even more impassioned.

“These balls are flying in your face, you have to catch it, fly through the air, and they stay still.

“These hoops, they’re smaller than in basketball, there’s no backboard so you need more precision to get the ball in the hoop but when you’re doing netball in school you don’t see it as a viable career path because it’s not visible and that’s something that breaks my heart because people say to me ‘can you make a viable career out of being an athlete’ and I say ‘Yes! You can trust me, you can totally make a career and a living out of being an athlete’.”

Another bugbear is the way sport is taught in schools, she explains.

“At some schools you have to wear skirts and aside from in netball, athletes don’t wear skirts. And oversized baggy t-shirts, telling girls they can’t be too tight when they want to feel agile. I think the format for PE at school could be shifted to make people enjoy it more, whether that is giving more time to PE, offering more options maybe.

“In school, we just used to run around the track endlessly, I don’t run more than one lap now and I’m an Olympic sprinter, so why in school do you have to go and run ten laps? Of course you’re going to hate it, it’s exhausting.

“Why do you force everybody to do it in school? Why don’t go into the gym and lift weights? Why don’t we do things that you do in later life because loads of girls come back to activity when they’re about 19.”

Dina is clearly passionate about her sport in a way that’s galvanising and almost makes me want to re-evaluate my stance on running, and last year she needed to be to get her through finishing her degree – she graduated with a 2:1 degree in History from Kings College, London – and getting back on the track after breaking her foot.

“You don’t know how strong you are until being strong is the only choice you’ve got,” she says, matter-of-factly.

“Last year, I had to make my championship just for me because it was my dream. I had to make the track in London. If I’m on the track, I have to do a good job because I’m not going there just to fill up the race. That’s just who I am, I want to be getting in the final, I want to be throwing myself out there for a medal.

“When that seems like a pipe dream you have to be resilient, especially when so many people around you – not close to me – but so many other people around you are telling you you can’t do it, you have to have confidence in your own ability and tell yourself you can do it and that is resilience.”

Now that’s inspiring the next generation of women in sport, I ask her about the women who inspired her.

“I know one inspiration is Allyson Felix, she’s the most decorated female athlete in track and field ever but I remember watching the first two Olympics, the first time she got silver, I think it was at Athens, which was great she was so young.

“The second time, four years later, silver again and you saw her face just like ‘I can’t let this happen’ and then in 2012 she smashed it and won and from there she’s won like everything and she’s an incredible athlete because she’s resilient. When you have these lows, you can’t let it defeat you.”

Müller have partnered with British Athletics to inspire the next generation to have fun with athletics. Müller events encourage consumers to have fun and be in the moment of now, enjoying moments of pleasure. Find out more: www.mullercorner.com/