11 ways to deter unwanted cats from venturing into your garden

Don't despair if the neighbour's cats are having a field day of destruction in your garden - there are plenty of ways to keep them at bay...

I don't want to be a killjoy about people's pets, but when I see a neighbour's feline stray into my garden, I just want to get my claws out.

I've caught them rolling around in my glorious borders of purple nepeta, otherwise known as catmint (red rag to a bull, I hear you say, but when I planted it years ago, I had no idea it would be such a moggie magnet), using my trees and shrubs as scratching posts and using a variety of areas of the garden to do their business.

I don't particularly want to dig my catmint up, but it might be prudent to replant it in a different place so that local cats will disregard other areas of my garden.

To date, the best deterrent I've found was a high-powered water pistol bought from a car boot sale for 50p which I left at the patio door and fired maniacally every time a cat dared to cross my garden path.

But here are some other suggestions I've collected over the years...

1. One fellow gardener reckons that the only way to stop neighbours' cats wandering in is to have your own cat (preferably a tom), as this generally keeps other animals out of your garden.

2. Alternatively, try to stop them getting in. Block your boundary gaps with prickly plants or prunings such as holly. Fit wire or string 10-15cm above the top of fences to make it difficult for cats to balance on them.

[6 common garden pests and how to get rid of them]

3. Another solution is an old gamekeeper's trick. Place half-full plastic bottles in borders, as the light reflection off the bottle is supposed to deter animals.

4. Again, mailshot and other unwanted CDs can provide a shining light deterrent when threaded on twine with knots in between to keep them apart. String these across flower beds or hang from trees and the light reflection should deter cats, but maybe not forever. 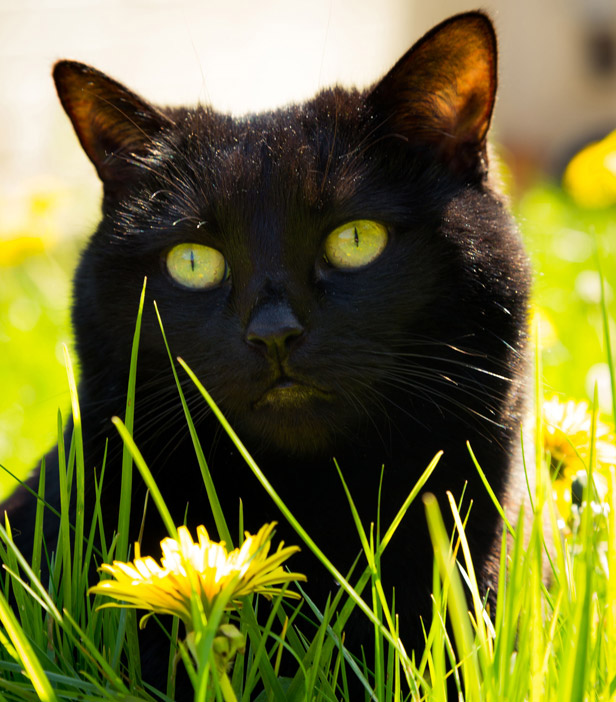 5. Don't leave exposed soil in borders. Instead, mulch with stone chipping or pebbles, or keep the soil well mulched with a moisture-retaining material such as manure, as wet ground is not particularly attractive to them. Also, invest in a good selection of ground cover plants to deter cats from venturing into your border.

6. Some gardeners swear by putting a couple of drops of decongestant Olbas oil on to used teabags and then scattering them around the area that the cats have chosen to use as a litter tray.

7. If they're scratching your tree trunks, wrap tree guards or fine chicken wire around the base of them.

8. Cover ponds with netting to stop cats diminishing your fish supplies and position bird feeds in a clear area of the garden where they will be inaccessible to cats.

9. Try fitting a squirrel baffle (downward opening cone or biscuit tin) to the posts of bird tables to stop cats climbing up them.

10. There are a number of cat repellents on the market, including sprays and powders, chemical granules and ultrasonic devices whose sensors detect movement and heat and trigger a burst of variable ultrasound said to deter dogs, foxes and cats. But they may not give long-term protection.

11. If cats in your garden are scratching up seedbeds, try putting a galvanised chicken-wire cage over the area and keep it in position until the plants are of a reasonable size.

Whatever method you choose, clear away any evidence of fouling first, as this acts as a magnet for more cats and more fouling.