This invasive plant is often in the news, but is it lurking at the bottom of your garden? We find out all you need to know about the worrisome weed.

Japanese knotweed – or to give it its proper name, fallopian japonica – has been in the news for a while for everything from how difficult it is to remove to horror stories of some people being unable to sell their houses if there is any of it present in the garden. Even the Government has legislation about this invasive, non-native plant.

But what exactly is Japanese knotweed – and how do you know if your garden is affected?

[Read more: How do you get rid of Japanese knotweed?]

What is Japanese knotweed?

Japanese knotweed is a perennial plant from the knotweed family. It was first introduced to Europe by German botanist Philipp Franz von Siebold in the Victorian era. The plant soon became popular during this time due to its resemblance to bamboo and the speed at which it grew. It was also used by farmers to feed their animals.

However, the plant’s wonderful reputation soon wilted and by the beginning of the 20th century, Japanese knotweed was regarded as a nuisance in the UK.

The shoots of Japanese knotweed have a superficial resemblance to bamboo – although the two plants are not related. These shoots can grow up to 7 feet tall.

Japanese knotweed has heart- or spade-shaped leaves of up to 5 ½ inches in length. The plant flowers in late summer to early autumn, with tall spurs of creamy-white flowers which can reach 6 inches long.

In the winter the stems will be bare and brown.

Japanese knotweed can easily be confused with other species, for example ‘Red Dragon’ knotweed, Himalayan honeysuckle, heart-leaved houttuynia and giant knotweed. If you are concerned you may have Japanese knotweed on your land, it’s best to get an expert opinion. 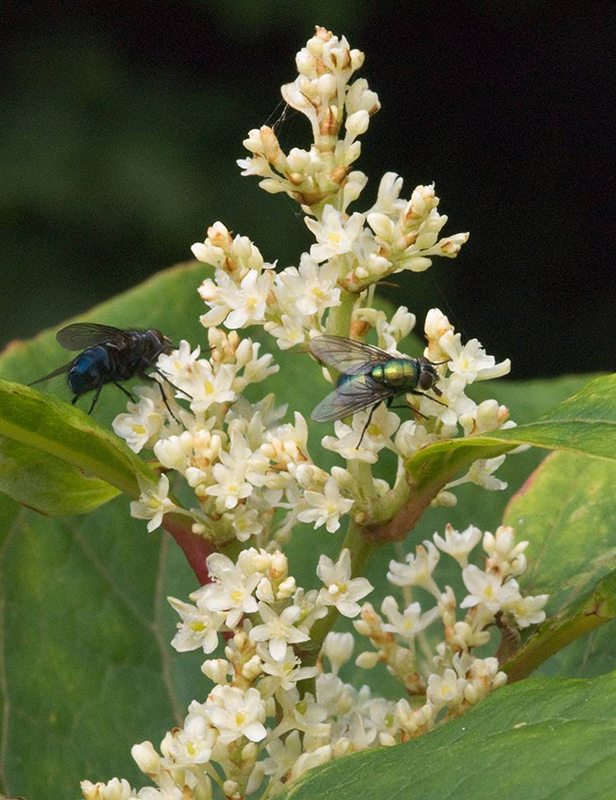 Why is Japanese knotweed a problem?

Japanese knotweed is now considered a problem plant for the same reason it was initially popular – its rampant growth.

This speed of growth – up to 8 inches per day - allows it to spread quickly and overwhelm other plants in its path.

It is also a strong enough plant to grow through tarmac and potentially cause structural damage to property due to particularly robust and wide root systems (spreading up to 22ft).

Japanese knotweed was in the news a few years ago when it emerged that some mortgage lenders refused applicants a mortgage if it was found in a neighbouring garden. However, such criteria have subsequently been relaxed and vary depending on the lender.

How does Japanese knotweed spread?

The plant does not produce seeds but rather reproduces via rhizomes – underground stems that send out root systems.

This means that Japanese knotweed can easily be spread via the transport of top soil from affected areas. As the plant’s root systems can spread so far, even soil that looks unaffected may be affected.

Due to the plant’s tenacity, the Government even has specific instructions for vehicles used to transfer Japanese knotweed waste to disposal sites. These must be cleaned thoroughly – for example by jet wash – and inspected to check that no plant matter or rhizomes remain. If they do, they could easily be spread to another area by the vehicle.

What is the legislation around Japanese knotweed?

Whilst it is not illegal to have Japanese knotweed on your property, there are two key pieces of legislation relevant to the plant.

The Wildlife and Countryside Act 1981 made in an offence to cause Japanese knotweed to spread or grow in the wild.  You could be fined as much as £5,000 or imprisoned for up to two years for doing this.

More recently, Japanese knotweed has fallen under an amendment to the Anti-social Behaviour, Crime and Policing Act 2014. This aims to police the spread of Japanese knotweed, and other invasive, non-native plants, and details how these plants should be controlled by homeowners, individuals and businesses who have them on their property.

Defra notes: “Local councils and the police (in most cases it will be the local council) will have the power to issue notices for invasive non-native species like Japanese knotweed. The notice can place restrictions on a person’s behaviour (in the case of an individual, as long as they are aged 16 or over) and, if necessary, force them to take steps to rectify the behaviour that is having a detrimental effect on the quality of life of the community.”