‘Butlins at sea’? Here’s what mega cruise ship Harmony of the Seas is really like

Everyone seems to have an opinion about the world’s biggest cruise liner, but what’s it actually like? We stepped aboard Harmony of the Seas to find out.

Modern cruises are attracting a new breed of holidaymaker. Cruise bookings have more than doubled over the past decade, with companies such as Royal Caribbean investing billions of dollars on new ships to meet demand.

But the sector is still heavily derided and misunderstood by some.

The Harmony of the Seas is just one of them. Having stayed on the megaship, we thought we’d independently address some of the thoughts and concerns expressed by readers of various leading websites…

“Imagine being on one of those sun loungers with about 100 others sunbathing near you. Looks about as enjoyable as being on a crowded Tube train”

There’s no denying that loungers are tightly packed on the sun decks on Harmony of the Seas - but, unlike the London Underground, it’s highly unlikely that you’ll ever find your face in the armpit of a fellow traveller. 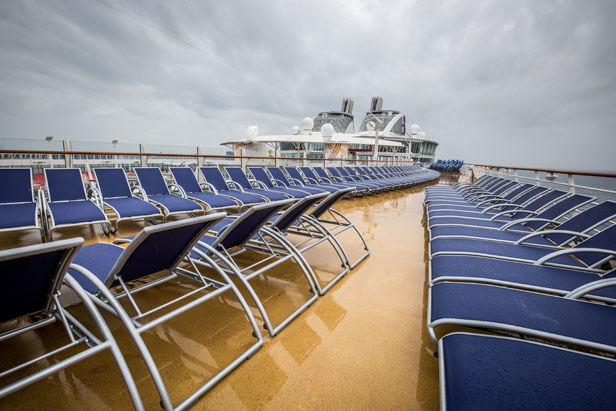 The ship is absolutely huge – it has 16 usable decks and is the length of four football pitches. If it looks too busy in one area, just find somewhere else.

That said, if you really don’t like people, this probably isn’t the type of holiday for you…

“Why go to the effort of going on a ship, only to be given the glossy and polished pretence of not being on a ship?”

Effort? This is hassle-free travelling. Turn up for a cruise and you’re instantly on holiday, and that’s before you’re whisked off to leading cities and resorts.

While aboard, we often forgot that we were on a ship, but waking up on the water was an absolute thrill, as was lounging on our balcony watching the world go by. To us, that’s what cruising is all about. All the rest is icing, sprinkles and cherries on the cake.

Yes, there’s a risk of a Norovirus outbreak but, of course, Royal Caribbean takes the issue very seriously and has a well-established outbreak prevention and response plan.

Passengers need to play their part too. You’re required to use hand-washing facilities before enjoying the breakfast and lunch buffets, for instance.

Official figures show that, globally, there have been 10 outbreaks on cruises so far in 2016, with just one on Royal Caribbean ships, where 3.25% of passengers were affected. So it’s a pretty small risk.

We assume this is a reference to naff or old-school entertainment – but really it’s the comment which is hopelessly outdated. 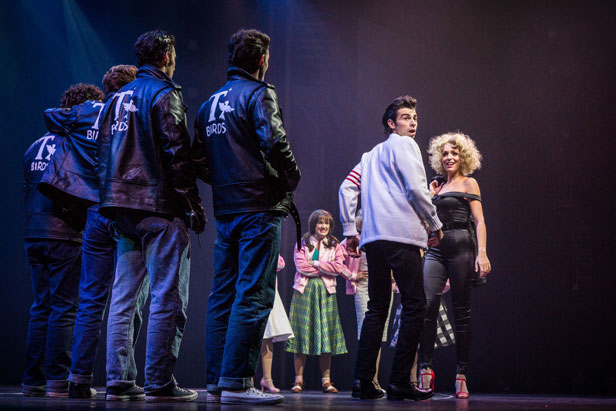 Shows on Harmony of the Seas, such as the original ice dance production 1887: A Journey in Time and Grease, feature international casts and are West End-standard. And that’s a long way from your local holiday camp.

The music acts are a little naff, admittedly (more X Factor than Glastonbury Festival), but you can’t really expect to find the world’s coolest rock stars on a cruise ship.

Anyway, no-one is forcing you to go to the ‘Totally Awesome 90s’ club night. Oh, and for the record, rooms and decks are incredibly well soundproofed.

“I wonder what the queues are like for breakfast, dinner, amenities, disembarking…”

We didn’t experience the ship at full-capacity, but checking in was painless due to a huge number of staff at dock. Some 2,100 staff and crew are on board to cope with the large passenger count, which at its maximum is 6,780.

The main restaurant is spread over three floors and, despite catering for sit-down dinners for all passengers, the service was very efficient. Breakfast and lunch is served in a large buffet cafeteria.

That said, at times we were frustrated waiting for lifts. And we couldn’t be bothered to wait 10 minutes for a drink from the gimmicky Robotic Bar.

“The price of a cruise may be cheaper than you expect but once you’re on board and a prisoner, you will be fleeced by the restaurants and the beer prices”

Food is included in the price, although there are many specialist options available for extra.

Yes, there’s a charge for alcohol, but if you’re a serious drinker inclusive packages are available for around £30 a day.

Of course, you won’t be spending all your holiday on a cruise, and you’ll want to be sampling local food and drink too.

“Might hit an iceberg and then be eaten by sharks or orcas, because the five lifeboats won't be enough for the amount of passengers on board...”

The Harmony of the Seas has 18 ‘mega’ lifeboats, each capable of carrying 370 passengers. That’s 6,660 in total – slightly less than the theoretical capacity, admittedly! (Although maximum capacity with double occupancy is ‎5,479).

Staff are expected to use inflatable rafts, and are trained how to access these via chutes.

All passengers are obliged to attend muster drill (all facilities are shut during this time), to become familiar with the location of the emergency meeting point and how to fit a lifejacket.

If you are worried about potential disaster, you might not be completely won over by all this. Some reassurance for this commenter, though: orca whales don’t eat humans!

“Cruising should be a peaceful holiday, away from ‘theme park’ type of activities”

Other, more sedate types of cruise with specialist activities are also available – from Royal Caribbean and other carriers.

Or a hotel? It’s a floating hotel!

Actually, we got familiar with the layout very quickly. The ship is split into seven neighbourhoods (Central Park, Royal Promenade, Entertainment Place etc), and the main decks are distinctive in their own way. 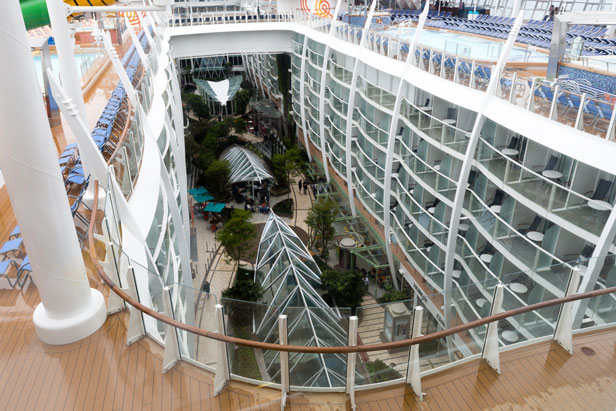 There are also touch-screen guides on walls. Click on your destination, and it shows you the route. Very cool.

“I’m no expert, but it looks top-heavy to me”

It does a bit, but we’re sure the engineers know what they’re doing. Harmony of the Seas is wider than its predecessors – and, indeed, any other cruise liner on the planet – allowing the designers to build higher.

Plus, of course, the centre of the boat is ‘hollowed out’. Internal rooms have balconies over-looking the open-to-the-elements park and entertainment areas.

We were surprised when looking at the cost too – at the time of writing, seven-day cruises around Europe (from Barcelona) are available from £799, and Caribbean (from Fort Lauderdale) for £702  – both based on two sharing.

That said, the lower prices are for inside cabins (or ‘staterooms’ as they’re known here). We’d insist on an outside room, with a balcony – and that costs a fair bit more.

The suites, which include double-height loft rooms and even options for families of up to 14 (!), are absolutely stunning. They even come with a personal concierge (or ‘genie’). We’d need to win the lottery to afford one of those, mind.

“This thing can’t be good for the environment”

We don’t think anyone is going to claim that cruising in the most environmentally-friendly way to travel.

That said, Royal Caribbean claims the Harmony of the Seas is 20% more efficient than its slightly smaller sister ships, Oasis and Allure. Apparently, this is largely due to a new ‘full air lubrication system’ which uses air bubbles to reduce the resistance between the ship’s hull and the water.

“Sagacity! Think of all those ‘blue rinses’ on board”

Yes, even in 2016 people still think all cruises are only for older people.

With other amenities such as the pools, spa and fitness centres, youth zone, crèche/babysitting facilities, fast wi-fi, a casino and numerous evening shows, it’s fair to say that there’s something for everyone aboard.

Incidentally, Royal Caribbean reps have told us that the average age of its customers in the UK is 45 – and the number is falling year on year.

“A quick tip to the Captain - avoid all icebergs...”

We’re fairly sure this is on the first page of the training manual. Besides, there aren’t too many icebergs in the Mediterranean or Caribbean…

For more information on Harmony of the Seas and latest prices, visit the Royal Caribbean website.