The European ‘superjumbo’ completed a successful test flight almost 17 years after Airbus had begun plotting to challenge the monopoly of the Boeing 747.

The Airbus A380, the biggest and heaviest passenger airliner in aviation history, completed its first test flight on this day in 2005.

As shown in the video above, the four-hour flight from Toulouse-Blagnac airport took place under clear skies and in front of thousands of spectators. The maiden flight was a significant milestone in a 17-year project by the pan-European aerospace company to produce an aeroplane to challenge the 35-year monopoly of the Boeing 747 in the large-aeroplane market.

By incorporating two decks running along the entire length of the fuselage, the A380 – dubbed a ‘superjumbo’ – boasts 40% more floor space than Boeing’s current largest plane, the 747-8, and could carry 853 passengers in an all-economy class configuration (though the typical setup sits 525). With a range of 8,500 miles, the A380 also had a range 2,800 miles longer than the 747-400, its equivalent at the time.

The plane is powered by four Rolls-Royce engines, and while its cruising speed is 560mph (0.85 Mach), an A380 hit 0.96 Mach (730mph) in a later test flight. However the plane’s lighter innovative aluminium-glass-fibre laminate body makes it more fuel-efficient than many smaller jets.

No less remarkable than the development of the A380 is the circuitous route taken by its constituent parts to the assembly hall in Toulouse. With major components coming from Spain (tail), Germany (fuselage) and the UK (wings), ships have to be custom-built to ferry the parts to Bordeaux and onward by barge to the town of Langon, where they are conveyed by road to Blagnac. 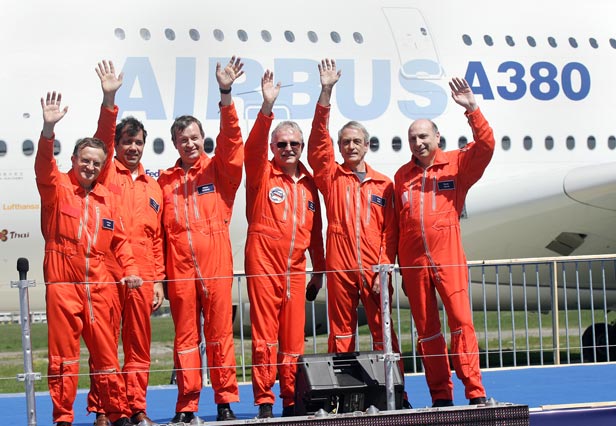 Although around 140 orders had already been placed for the A380 when test pilot Jacques Rosay and his five-strong crew (above) took off from Toulouse, Airbus was taking no risks, with all six carrying parachutes for the duration of the flight. On landing, Rosay said flying the superjumbo had been “like handling a bicycle”. 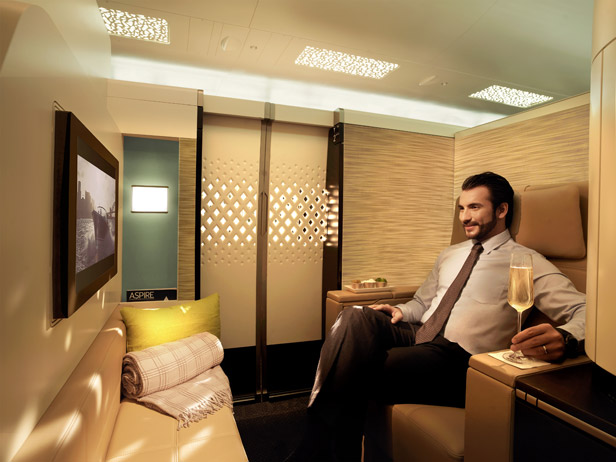