The heir to the throne and the woman once accused of breaking up his marriage to Princess Diana wed in a small civil ceremony some 30 years after they first met.

Prince Charles married his second wife Camilla Parker Bowles on this day in 2005 – more than 30 years after they had first begun a relationship.

As shown in the video above, the couple were wed in a small civil ceremony at Windsor’s Guildhall, witnessed by the Prince’s eldest son William and Mrs Parker Bowles’ son Tom. Though Prince Harry was also in attendance, the Queen and Prince Philip were absent.

They did however join the couple for a service of blessing at St George’s Chapel, Windsor Castle led by the Archbishop of Canterbury Dr Rowan Williams, and attended by about 800 family members and friends. 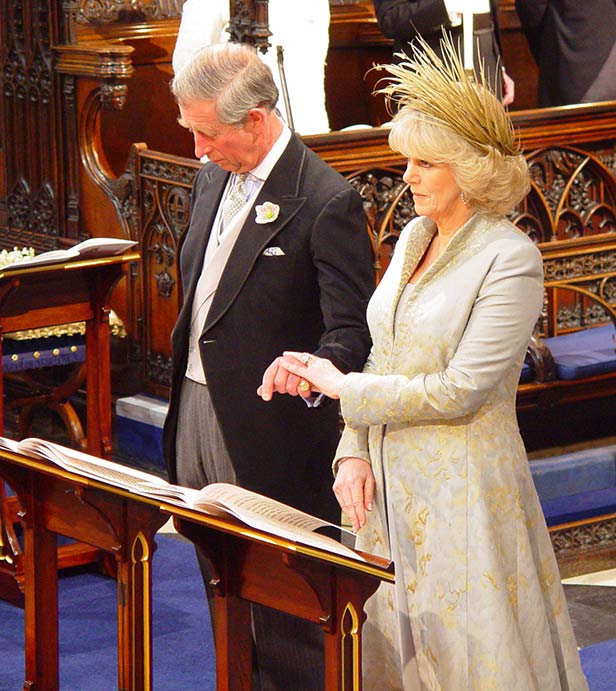 The Prince of Wales had first met Camilla Shand in the early 1970s, and the couple enjoyed a romance that was curtailed when Charles travelled abroad with the Royal Navy. In addition, Camilla was pursuing an on-off relationship with Andrew Parker Bowles, who she would marry in 1973.

Mrs Parker Bowles divorced her husband in 1995 but it was widely believed that her romance with the Prince was rekindled well before then – leading his first wife, Princess Diana, to claim in her Panorama interview with Martin Bashir that there were “three of us in this marriage”.

After the death of Diana, the couple’s relationship stabilised and they were first seen publicly together in 1999. By 2002 Camilla was seen to be accepted into the Royal circle, and was invited to attend the Queen’s Golden Jubilee celebrations.

On becoming married to the Prince, Mrs Parker Bowles took the title HRH Duchess of Cornwall. The couple enjoyed a reception held for them by the Queen at Windsor Castle, before travelling to the Prince’s residence in Scotland for their honeymoon.

Charles and Camilla – Did you know?
Print this story
Back to top