A two-week heatwave peaked when the temperature in Brogdale in Kent hit an all-time high, causing Britons to sweat and the Met Office to crack open the bubbly.

The UK had been getting hotter with each passing day of its heatwave, and the first record-breaking temperature was measured that Sunday at Heathrow airport when the mercury reached 37.4°C (100.5°F). This beat the previous UK record of 37.1°C, which had been recorded in Cheltenham on August 3, 1990.

But temperatures soared even higher – and other British weather stations started to break their records, too. It was Brogdale, near Faversham in Kent, which ended up recording the highest temperature: a scorching 38.5°C (101.3°F). 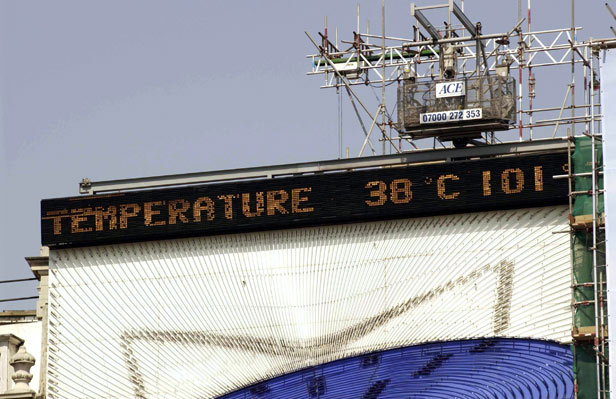 “There was a quiet little cheer when the record broke here in the operations centre,” said Nigel Reed of the Met Office.

“We believed it was going to happen today, so we took some professional pride in that.”

Hundreds of thousands of Brits took to the coast to enjoy the hot weather, and roads were jammed as people headed out of the cities. Bournemouth alone recorded 100,000 people on its beaches.

[June 24, 2010: Isner and Mahut serve up the longest tennis match ever at a weary Wimbledon]

But it wasn’t all good news. The hot weather also triggered thunderstorms and flash floods in northern England and Scotland – and led to train delays as railway lines buckled under the heat.

The high temperatures also worried some of those monitoring climate change. “It is part of a general trend,” climate change expert Crispin Tickell told BBC News.

“You can see it over the last few years quite clearly. The world is getting warmer, and human activity is largely responsible for it.”

Record-breaking weather – Did you know?
Print this story
Back to top