Two years in the making and influenced by the Napoleonic Code, the Universal Declaration of Human Rights was adopted by the fledgling body on this day in 1948.

Three years after its foundation, the United Nations adopted one of its cornerstones – the Universal Declaration of Human Rights – on this day in 1948.

The milestone document was the first global expression of fundamental human rights – and has formed the basis for many laws and constitutions since.

The United Nations was formed in the aftermath of World War II, and its Charter – signed on October 24, 1945 – committed UN states to promote "universal respect for, and observance of, human rights and fundamental freedoms for all without distinction as to race, sex, language, or religion."

It was generally agreed among the international community that the Charter did not go far enough in defining these “human rights and fundamental freedoms”, however. A Declaration was therefore commissioned in 1946 which would specify them – and while it would not be a legal document itself, it would clarify the rights in the Charter, which was binding for all member states.

The Universal Declaration of Human Rights (UDHR) was drafted by the UN’s Commission on Human Rights – which was made up of 18 members from various countries and backgrounds – and was overseen by the Commission’s Chairperson, Eleanor Roosevelt. 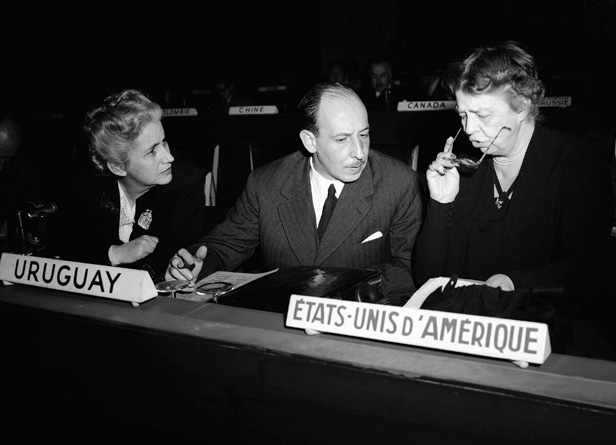 The preliminary draft was written by the United Nation’s first Director of the Division of Human Rights, Canadian legal scholar John Peters Humphrey – but it was the second draft, prepared by Frenchman René Cassin, which was submitted to the Commission.

Influenced by the Napoleonic Code, Cassin compared the Declaration to the portico of a Greek temple: having a foundation (Articles 1 and 2), steps (the preamble), four columns (the main body) and a pediment (the last three Articles). Cassin reduced the draft from 46 basic articles to 44 – and many amendments were suggested by UN councils, representatives and member states during the two-year process from the Declaration’s first draft to its passing in 1948.

The final draft contained 30 human rights articles and its preamble states that “The General Assembly proclaims this Universal Declaration of Human Rights as a common standard of achievement for all peoples and all nations.”

[April 25, 1953: Crick and Watson crack the code of life as paper reveals structure of DNA]

Article 1 states: “All human beings are born free and equal in dignity and rights. They are endowed with reason and conscience and should act towards one another in a spirit of brotherhood.” Its other articles include the declarations that everyone has the right to freedom of thought, religion and movement, the right to education, to seek asylum, to be presumed innocent until proven guilty – and that nobody should be held in slavery or subjected to torture.

The final draft of the Declaration was put before a meeting of the United Nations General Assembly in Paris on the night of December 10, 1948. It was adopted unanimously – with a vote of 48 in favour, none against, and eight abstentions.

“We stand today at the threshold of a great event both in the life of the United Nations and in the life of mankind,” said Eleanor Roosevelt. “This declaration may well become the international Magna Carta for all men everywhere.”

And indeed, the Declaration and its Articles formed – and continue to form – the basis of human rights laws, treaties and constitutions in governments, courts and institutions all over the world.

[Also on this day in 1901: First Nobel Prizes awarded on fifth anniversary of founder's death]

Universal Declaration of Human Rights - Did you know?
Print this story
Back to top