Three trains collided during the morning commuter peak near the busiest train station in Europe, killing 35 people and injuring 500 others.

On the morning of December 12, 1988, a train crash near Clapham Junction in South London, involving three trains carrying 1,500 passengers between them, killed 35 people and injured almost 500 more.

The collision occurred at just after 8am, when a packed commuter service from Basingstoke heading to Waterloo slowed for signals, and was struck from behind by a service approaching London from Bournemouth at about 40mph.

The incident was exacerbated when an empty train travelling in the other direction ran into the wreckage, killing and injuring passengers who had survived the initial crash. 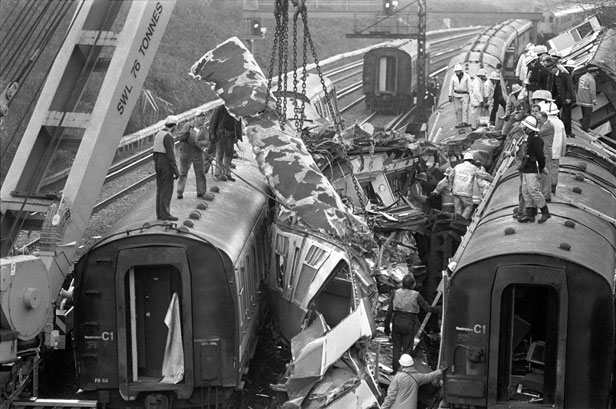 Emergency services arrived soon afterwards but were hampered by a fence on one side of the line and a wall on the other, as well as surrounding trees and shrubs.

Survivors had to be cut out of the tangled carriages before being transferred to St George’s Hospital in Tooting – though some were so badly injured that they required emergency procedures at the scene.

It was later discovered that the collision was caused by faulty wiring which caused a signal failure.  British Rail was fined £250,000 for failing to comply with health and safety laws.

The Clapham rail crash – Did you know?
Print this story
Back to top