All 259 plane passengers and 11 people on the ground were killed when a bomb was detonated on a jumbo jet above the Scottish town of Lockerbie.

Shortly after 7pm on the evening of December 21, 1988, a Pan Am jumbo jet exploded above the Scottish town of Lockerbie, near the border with England.

Part of the jet, a Boeing 747-121 bound from Heathrow to JFK Airport in New York, ploughed into the town below at over 500mph, causing a huge fireball and leaving a 47m (154ft) long crater, destroying houses in its wake.

All 243 passengers and 16 crew on board the plane were killed, along with 11 Lockerbie residents who perished in the ensuing crash and explosion, which measured 1.6 on the Richter scale.

It was later discovered that an explosive device in the forward cargo hold had punctured a 20-inch hole in the fuselage. Investigators would later conclude that the force of the explosion had ripped off the plane’s nose cone within three seconds of its occurrence. 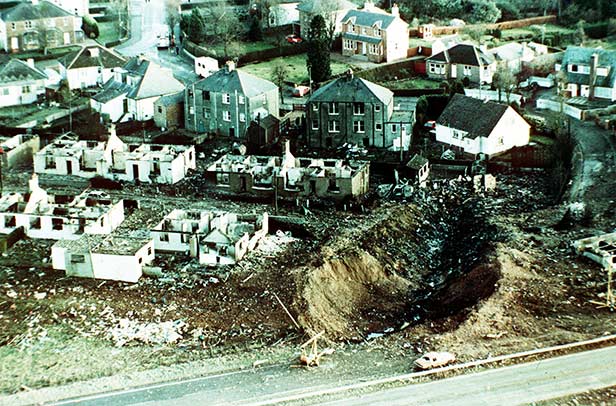 After the biggest- ever murder investigation to be mounted in Scotland, two alleged Libyan intelligence agents were charged with planting the bomb. After protracted negotiations, they were handed over to Scottish police by Libyan leader Colonel Muammar Gaddafi in April 1999.

In January 2001, after an 84-day trial at Camp Zeist in Holland, Abdelbaset ali Mohmed al-Megrahi was jailed for life. His compatriot Al Amin Khalifa Fhimah was found not guilty.

Al Megrahi served eight and a half years in Scottish prison, continually protesting his innocence, before being released on compassionate grounds after being diagnosed with terminal prostate cancer. He died in Libya in May 2012.

The Lockerbie bombing - Did you know?
Print this story
Back to top