The Queen's 1957 Christmas broadcast was an historic event - it was the first to be televised live into living rooms up and down the country.

On this day in 1957, Queen Elizabeth II made the first televised royal Christmas broadcast from a study in the Long Library at Sandringham House, Norfolk.

For the first time cameras were present in her own home on Christmas Day, as the Queen gave her speech from the same desk used by her father, King George VI, and his father King George V, for their broadcasts, adorned with pictures of her children Prince Charles and Princess Anne.

The idea to make the change from radio broadcast to a televised speech came from the BBC’s head of outside broadcasting, Peter Dimmock, who was in charge of the 1957 production. The Queen was said to be keen to embrace the new technology and agreed immediately.

After a rehearsal run-through on Christmas Day itself, the Queen went straight into the broadcast, using a teleprompter and occasionally glancing at a set of notes she kept on her desk.  Dimmock would later call her delivery of the speech “extremely accomplished”. 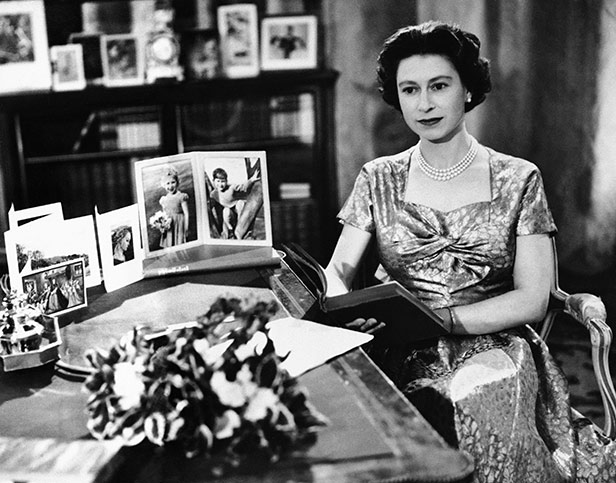 The Queen made reference to the innovation, saying: “I very much hope this new medium will make my message more personal and direct. It’s inevitable that I should seem a rather remote figure to many of you … but now, at least for a few minutes, I welcome you to the peace of my own home.”

[June 7, 1977: Britons mark the Silver Jubilee with street parties and a London parade]

On the 25th anniversary of the first Christmas broadcast by a monarch – made by George V in 1932 – Her Majesty continued with the theme of embracing change, while continuing to adhere to the best aspects of older ways and values.

Christmas broadcast - Did you know?

• The Royal broadcast had begun in 1932 at the suggestion of the BBC’s Sir John Reith as a way of inaugurating the corporation’s new Empire Service, which later became the World Service.

• The 1932 speech delivered by George V was written by author and poet Rudyard Kipling.

• Though now a deeply-held annual tradition, no Christmas broadcast was made in either 1936 or 1938.  It was the effect of the speeches made during World War II that convinced George VI that they should become a fixed annual event.

• Up to and including 1959, the broadcasts were made live and recorded then repeated over the following days for the benefit of those in parts of the world unable to get a good reception on the day.

• Since 1960, the Queen’s speech has been pre-recorded so that the tapes can be sent around the world to 17 Commonwealth countries, to be broadcast at a convenient local time.

• In only one year, 1969, has there been no broadcast of the Queen’s speech, as that year the BBC were repeating their documentary ‘Royal Family’. Instead, Her Majesty issued a written message to reassure people that the broadcast would return the following year.

• Once the sole preserve of the BBC, from 1997 the Queen’s speech was broadcast alternately by the corporation and its rival, Independent Television News (ITN). Since 2011, Sky News has been added to the rotation of broadcasters.

• Although originally broadcast from Sandringham, the speech is now usually recorded at Buckingham Palace, though in 2003 the message was filmed at Combermere Barracks in Windsor - the first time the address had been shot entirely on location.