February 18, 2005: Hunting ban comes into force across England and Wales

11 years ago today, fox hunting with dogs was made illegal in England and Wales after a ban on the activity came into force overnight.

Animal rights campaigners celebrated on this day in 2005 when a ban on hunting using dogs came into force in England and Wales.

Under the Hunting Act, passed three months earlier, foxes, deer, hares and mink could no longer be killed by dogs as part of a hunt. But  a maximum of two dogs could still be used to flush out a fox from cover to be shot or killed by a bird of prey, or to flush out other wild animals considered a threat to game or livestock.

The Labour government had introduced the bill, which originally offered the possibility of some licensed hunting. An amendment was then introduced by MP Tony Banks providing for a total ban, which passed in the Commons but was blocked by the House of Lords.

The then Speaker, Michael Martin, used the Parliament Acts of 1911 and 1949 to overrule the Lords’ veto – only the seventh time in almost 100 years such a power has been invoked – and the bill became law.

Pro-hunting campaigners had protested at the announcement of the proposed legislation in 2002, with over 400,000 members of the Countryside Alliance marching on the Houses of Parliament. 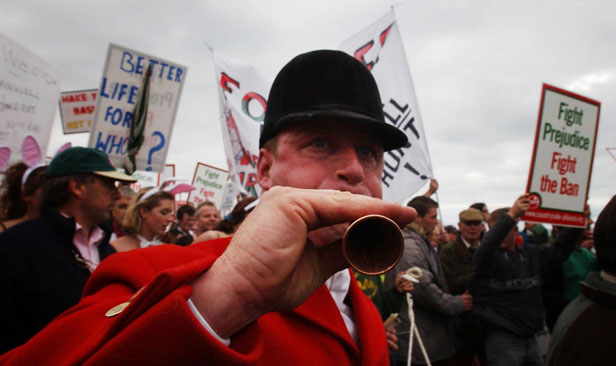 Official hunts proposed to remain operational by having dogs follow artificial scents - drag hunting – or by using real animal scent in order to replicate the hunting of live quarry as accurately as possible - dubbed trail hunting.

Opponents of hunting maintain it is cruel and unnecessary for pest control. Supporters say the fox’s death is quick and more humane than other forms of control, such as poisoning or gassing, and that in fact more foxes have died since the ban was introduced.

Hunting ban - Did you know?
Print this story
Back to top