Fourteen years after Britain and France agreed to collaborate on a supersonic jet, two of the iconic planes took off at 11.40am – one from London and one from Paris.

The Anglo-French supersonic airliner Concorde made its first commercial flights on this day in 1976, seven years after its maiden test flight.

Two flights took off at precisely 11.40am, carrying the first commercial passengers to travel at faster than the speed of sound. A British Airways Concorde took off from London to Bahrain, as an Air France Concorde simultaneously left Paris on its way to Rio de Janeiro via Dakar in Senegal.

Concorde’s story had started many years earlier, as part of the Cold War tech race between Western nations and the Soviet Union. In 1962, the governments of Britain and France had signed an agreement to jointly produce a supersonic aircraft. After 14 years of development, Concorde’s maiden commercial flights on this day in 1976 were the final culmination of this agreement.

Britain and France had faced competition from the US and the USSR, both of whom were attempting to create their own supersonic planes. In fact, the Soviets – partly working from details stolen from the Anglo-French project – were the first to have a supersonic aircraft (dubbed Concordski) fly.

Three months later, in March 1969, Concorde made its maiden test flight. The 27-minute test flight was a resounding success. So much so that, in the heady days after March 2, 1969, many airlines around the world expressed interest in the new, ground-breaking aircraft. 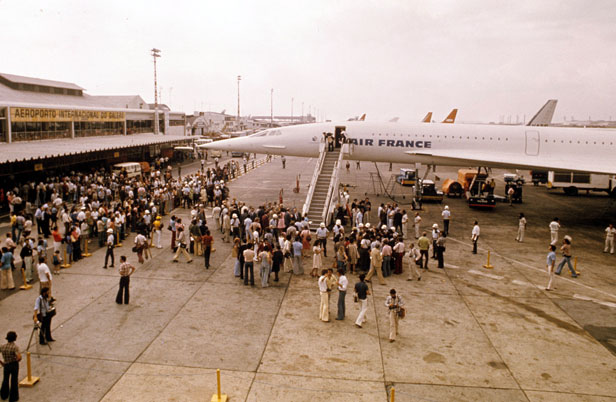 During the interval between the maiden test flight and Concorde’s commercial development this interest gradually fell away. Concerns over the sonic booms produced by Concorde’s engines and worries about operating costs left British Airways (then Government run) and Air France (state run) the only two airlines who ever operated Concorde jets.

Whilst Concorde’s eventual transatlantic London/New York and Paris/New York routes would become iconic, in the early days the plane was banned from flying over US territory. This meant that the routes flown on January 21, 1976 were London Heathrow to Bahrain and Paris Orly to Rio de Janeiro. Captain Norman Todd piloted flight BA300 to Bahrain on this day in 1976.

It wasn’t until later in 1976 that the first passenger Concordes were given permission to land at Dulles Airport in Washington. New York held out until 1977, when the first scheduled Concorde flights to New York began on November 22.

Concorde’s era of supersonic travel lasted for nearly 30 years. The iconic ‘Speedbird’ took its final flight on October 24, 2003. Dwindling passenger numbers, rising costs and a fatal accident in 2000 all sealed the fate of the ground-breaking aircraft.

Concorde – Did you know?
Print this story
Back to top