March 26, 1997: Comet Hale-Bopp claims the lives of 39 cult members as it flies past Earth

Police found the bodies of 39 members of a San Diego cult who had committed mass suicide in the hope that the passing Hale-Bopp comet would carry them into space.

On this day in 1997, US police discovered the bodies of 39 cult members who had committed mass suicide in an attempt to allow their souls to hitch a ride on a passing spaceship.

The dead were members of the Heaven's Gate cult, and they had willingly taken their own lives in the belief that their souls would be whisked to the "next level" by aliens travelling in the wake of a passing comet.

They believed Comet Hale-Bopp (below, over Stonehenge) carried a spaceship in its luminous tail, and they chose to shed their earthly bodies - simply "containers" - as the comet passed close to Earth. 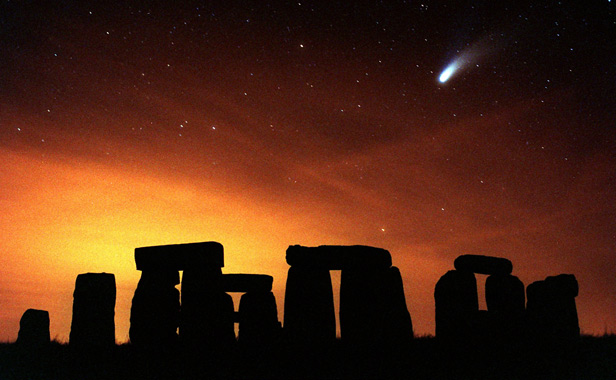 Death, they reasoned, would allow their souls to take flight and thumb an alien lift to a higher plane. Or, in the words of their leader Marshall Applewhite, to a "level of existence above human".

They died in shifts at their rented pad in San Diego, with some members helping others take a lethal cocktail of phenobarbital, apple sauce and vodka before downing their own doses of the fatal mixture.

Police found the dead lying neatly in bunk beds with their faces and torsos covered by a square, purple cloth. Each body sported an armband reading 'Heaven's Gate Away Team'.

Investigators later noted that each member carried exactly $5.75 in cash. This was said to be for an interplanetary toll.

Several of the cult's members, including Applewhite, underwent voluntary castrations in the months leading up to the mass suicide.

Indeed, members were taught to denying themselves worldly comforts such as sex, physical affection and individuality.

[Read more: The end of the world is nigh! Doomsday cults through the ages]

The cult believed that world was due to be "wiped clean" or "recycled" by an impending apocalypse, and that being 'clean' in one's own life was a perquisite for elevation to a “transhuman” state.

Detective Rick Scully, one of the first police officers on the scene, would later compare his involvement to "being on an episode of the Twilight Zone”.

He said: “We were wandering from room to room to room, and every room we went into we were finding bodies.

"You're thinking: ‘When is this going to end? How many bodies are going to be in here? How many rooms are there to this place?’ Every room we went in had bodies stacked up like cordwood.”

Heaven's Gate and Hale-Bopp - Did you know?
Print this story
Back to top