Car ferry the Herald of Free Enterprise capsized in calm waters outside the Belgian port of Zeebrugge, resulting in the deaths of 193 people.

A total of 193 people died and hundreds more were injured when a ferry capsized just off the Belgian coast at Zeebrugge on this day in 1987.

The Herald of Free Enterprise, a modern Townsend Thoresen car and passenger ferry, capsized in calm conditions just after leaving harbour for Dover.

Within moments after casting off, the eight-decked ferry listed to port, turned and tipped onto its side, resting half-submerged in relatively shallow water on a sandbank. Had it not fallen onto the bank, many more deaths were likely to have resulted.

As the video above explains, the bow doors had been left open by accident, causing the main vehicle deck to flood.

The whole event took place within 90 seconds, just over half a mile from shore. One survivor compared the speed the ferry capsized to “a glass of water being tipped over”.

Rescue helicopters and ships from the Belgian Navy were on the scene within half an hour, limiting the numbers of fatalities, despite being hampered by a rising tide which forced them to postpone their efforts at one point until morning. 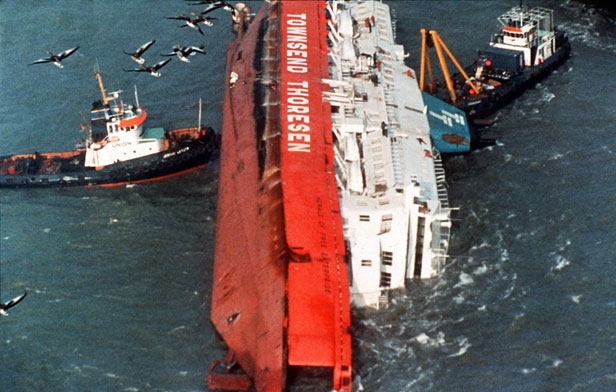 The ferry had held a contingent of 80 crew, over 100 vehicles and 459 passengers. Many of the latter were taking advantage of an offer to travel to the continent for just £1 organised by The Sun newspaper.

Most of the fatalities were a result of hypothermia, caused by not being able to escape the freezing cold waters quickly enough.

The death toll made the event the worst non-wartime sea disaster involving a British ship since 1914.

Zeebrugge disaster - Did you know?
Print this story
Back to top