March 9, 1959: Barbie – the pneumatic blonde with the perfect figure - makes her bow

Amid muttered misgivings about her ample bosom, an 11-and-a-half-inch doll by the name of Barbie made her debut on this day in 1959.

Turning 56 could be a time for sad reflection on how the ravages of time have led to the need for a discreet nip here and a perhaps a little tuck there.

But not for Barbie.

The doll, who enters her 57th year today, can look upon her 11-and-a-half-inch frame with pride over the lack of bodily deterioration.

Yes, a new version has been launched with almond-shaped eyes (thanks, Disney), a new jawline (thanks, Hollywood) and a "more natural-looking'' face (thanks PC brigade). But at heart she's the same girl who has featured at the top of Christmas lists for more than half a century.

It's all a far cry from Barbie's humble beginnings.

The doll was the brainchild of Ruth Handler, wife of one of the founders of Mattel - manufacturers of picture frames and dollhouse furniture.

Handler had observed her pre-teen daughter playing with soft dolls but having limited success in dressing them up. She also noted how Barbara - no coincidence - often used her dolls to act out adult situations.

Handler's husband Elliot and his business partner Harold Matson worried that parents wouldn't readily fork out for a doll that resembled a fully-developed women, but they decided to debut a prototype at the American International Toy Fair, staged in New York on March 9, 1959.

Those worries turned to vivid fears as Barbie's all-American charms were met with scepticism and a fair amount of shock.

But Handler knew she was on to something and managed to persuade Mattel to invest in TV advertising around The Mickey Mouse Club television show.

The gamble paid off handsomely and Barbie has never looked back, representing over 50 different nationalities and holding down more than 150 careers. 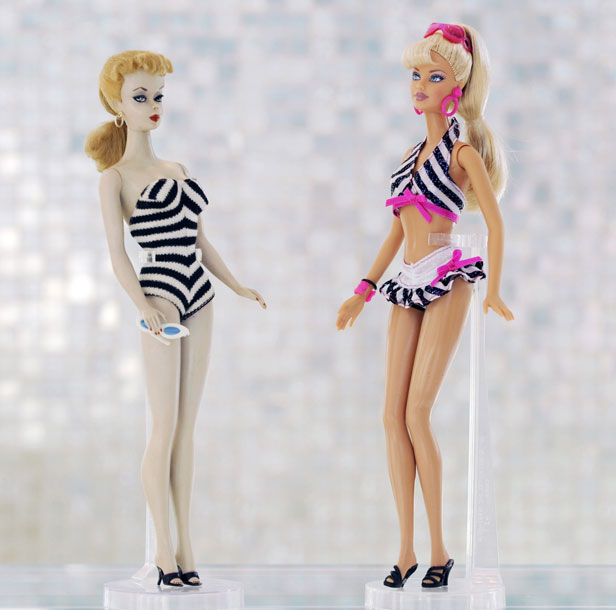 She's been a United States Air Force jet pilot, a surgeon, a Nascar driver, a palaeontologist, a firefighter and the Chancellor of Germany.

She even travelled to space in 1965 - four years before man walked on the moon.

And although she's yet to win office, she has run for president no fewer than six times since 1992.

It's perhaps her failure at the ballot box that spurred her latest endeavour: she's now a superhero. Check her out in Barbie in Princess Power, out now on DVD.

Given the glittering CV, it's no wonder fans see her as a shatterer of glass ceilings. They say her We Girls Can Do Anything attitude has empowered generations of women.

Others claim she fosters unrealistic ideals on young girls at the most vulnerable point of their lives. Scaled up, Barbie's vital statistics are estimated to be 36 inches (chest), 18 inches (waist) and 33 inches (hips), and girls of the 1960s could accessorise her bathroom with a tiny set of scales fixed at 110lbs (49.8kg) - little wonder that her name has been co-opted by a medical syndrome, sufferers of which try to emulate her appearance.

Either way, her popularity can't be questioned - Mattel estimates that a Barbie is sold every three seconds.

And she's nothing if not the mistress of her own fate. Despite those persistent rumours, she and Ken remain "just friends''.

Barbie - Did you know?
Print this story