A fire started by a stray cigarette took just four minutes to engulf Bradford City's old wooden stand, killing 56 fans less than an hour after they had celebrated promotion.

The worst-ever British football stadium fire happened on this day in 1985 at Valley Parade, home of Bradford City, claiming the lives of 56 fans and injuring at least 265 others.

Hundreds more were taken into hospital suffering from burns and smoke inhalation after flames engulfed the stadium’s main stand, a mainly wooden structure that had not been altered since its creation in 1911.

Over 11,000 supporters were in the ground – nearly double the season’s average crowd – to see Bradford lift the Third Division trophy, and the mood among them was one of celebration before their final game of the season against Lincoln City.

But at 3.40pm flames were spotted at the back of the main stand. The cause of the fire has never been definitively proved, but it is generally accepted that a supporter stubbed out a cigarette in a polystyrene cup, which smouldered then ignited an accumulation of rubbish underneath the stand.

Strong winds circulating around the ground fanned the flames, spreading them with terrifying speed; within four minutes, the whole stand was ablaze. Its wooden roof also caught fire, sending burning timber and molten asphalt and bitumen down onto spectators. 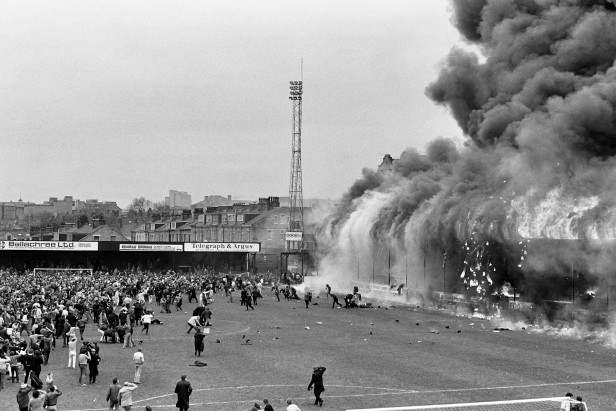 Those near the front of the stand jumped onto the pitch to avoid the flames, but many others tried to escape through exits at its rear – only to find them shut, and in some cases locked. 27 of those who died were found by exit K and turnstiles six to nine at the rear centre of the stand.

An inquiry into the disaster chaired by Sir Oliver Popplewell introduced new legislation to govern safety at sports stadia in the UK, including the banning of any new wooden stands, the banning of smoking in existing stands, and a requirement for stewards to undergo safety training.

The Bradford City stadium fire – Did you know?