May 20, 1960: Captured Nazi Adolf Eichmann is smuggled out of Argentina by Israeli agents

Adolf Eichmann, the facilitator of Hitler's Final Solution, was kidnapped and taken to Israel after Mossad agents found him living as a car-plant worker in Buenos Aires.

Adolf Eichmann, the man charged with implementing Adolf Hitler's 'Final Solution', was smuggled out of Argentina by Israeli agents on this day in 1960.

The man who applied the cold logistics of commerce to the annihilation of Jews had been tracked down to Buenos Aires by a crack team of Mossad operatives tasked with bringing the Nazi fugitive to justice.

Despite his high rank, Eichmann to evade the clutches of the Allied forces at the end of the war.

With the help of Bishop Alois Hudal, an Austrian cleric with Nazi sympathies, he spent five years moving between European monasteries that doubled as safe houses for wanted war criminals.

In 1950, armed with all the right paperwork, 'Ricardo Klement' (the alias can be seen on his passport, below) managed to get himself to what he thought would be sanctuary in Argentina. His family joined him in 1952. 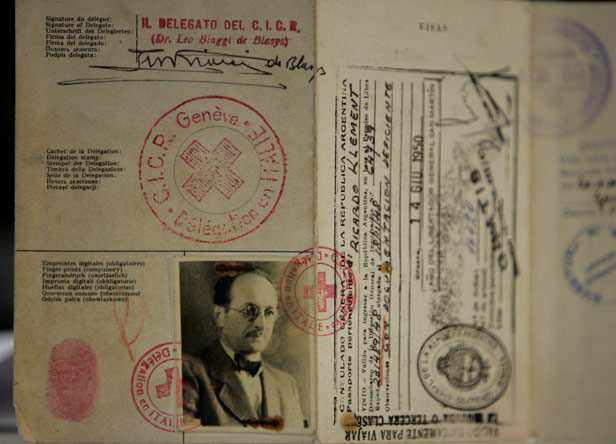 Rather than going to ground, Eichmann chose to hide in plain sight. He landed a job as a foreman at the Mercedes-Benz factory and built a family house at 14 Garibaldi Street in Buenos Aires.

A full 15 years after the fall of Berlin and fully ensconced in his new life, Eichmann would have been forgiven for thinking he had pulled it off. He even enlisted a sympathetic journalist to write his memoirs. In one taped interview he is alleged to have said: "I will leap into my grave laughing because the feeling that I have five million human beings on my conscience is for me a source of extraordinary satisfaction."

That grave wasn't as far off as he had hoped.

A Holocaust survivor living in Argentina alerted Israeli authorities that his daughter was dating a boy who had boasted about his father's Nazi past. That boy was the son of Ricardo Klement.

Israeli operatives were dispatched to investigate the lead.

On March 21, 1960 they observed Ricardo Klement return home from work with a bouquet of flowers which he handed to the woman who greeted him at the door. The couple's children were dressed for a special occasion and celebrations ensued. The agents checked their files: Adolf Eichmann was married on March 21, 1935. Was he celebrating his silver wedding anniversary?

It was proof enough for David Ben-Gurion, Israel's prime minister. But he wasn't going to risk the diplomatic route - Argentina had a history of turning down extradition requests. He ordered Eichmann's capture and deportation.

On May 11, Mossad operatives returned to Garibaldi Street and bundled Eichmann into a car as he returned home from work.

He was ghosted away to a rented house where, over the course of a week of questioning, he admitted his true identity.

On May 20, heavily sedated and disguised as an Israeli airline worker who had suffered a head trauma, he was taken aboard an El Al plane to Dakar in Senegal and from there on to Israel.

Three days later, Ben-Gurion announced the capture of the principal facilitator of the Holocaust. The world was stunned.

After a trial lasting eight months, during which 99 Holocaust survivors gave evidence, Eichmann (pictured above behind a bullet-proof screen) was found guilty of crimes against humanity, war crimes and membership of hostile organisations. He was sentenced to death and hanged on May 31, 1962.

He did not leap; there was no laughter.

Adolf Eichmann - Did you know? 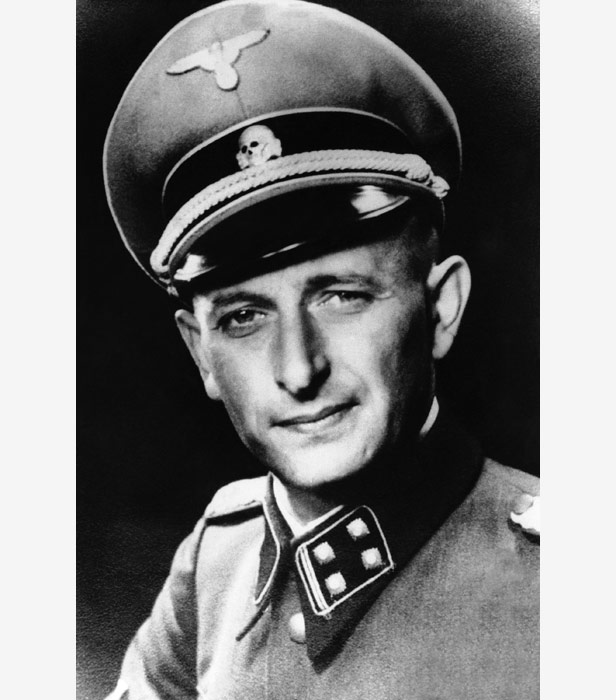