President John F Kennedy called on Congress to provide the $9bn needed to achieve his aim of putting an American on the Moon by the end of the 1960s.

In an impassioned speech to both houses of Congress on this day in 1961, US President John F Kennedy announced his ambitious aim of sending an American to walk on the moon before the end of the decade.

Calling for a massive injection of extra funds into the space programme, the President said:  "I believe that this nation should commit itself to achieving the goal, before this decade is out, of landing a man on the Moon and returning him safely to Earth."

[July 21, 1969: Neil Armstrong takes 'giant leap for mankind' onto surface of the Moon]

He said that an estimated $9 billion would be needed over five years for research and development of the technology that would be required to make lunar exploration a reality, but that he did not envisage the need for new taxes to raise the funds.

In truth, Kennedy’s announcement was motivated by a number of political factors. He had been blamed for the failed Bay of Pigs invasion of Cuba by anti-Castro exiles in April, and had also seen the Soviet Union beat the US into space when Yuri Gagarin made his orbit of the Earth that same month.

There was also a genuine fear of allowing the Soviets to get too far ahead in the Space Race in terms of what it might mean for their strategic power. “We go into space because whatever mankind must undertake, free men must fully share,” said the President. 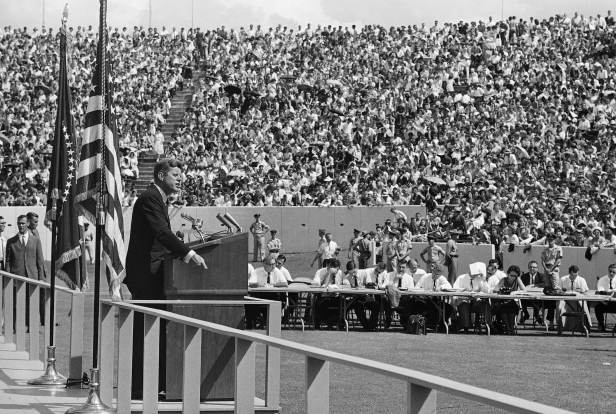 The first step in achieving his aim came when Nasa was able to expand into its Manned Space Center in Houston, Texas, on land donated by Rice University. In a speech at Rice in September 1962 (pictured above), the President would reaffirm his commitment to the project, calling it “a challenge…we intend to win”.

Despite Kennedy’s death in November 1963 the Apollo programme was fully funded, and his goal would be dramatically realised when Neil Armstrong and Buzz Aldrin took humanity’s first steps upon the moon in July 1969.

The Space Race – Did you know? 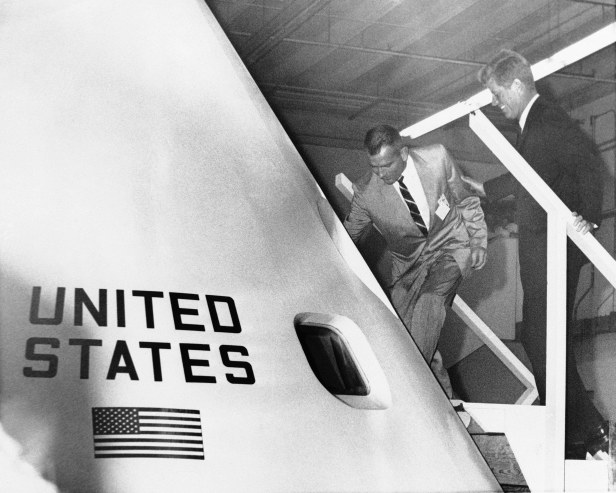