November 9, 1989: The Berlin Wall falls, taking much of Communist Eastern Europe with it

Communist Eastern Europe - and its most despised symbol - crumbled in late 1989, when East Germans were allowed to enter West Berlin for the first time in 28 years.

On November 9, 1989, the Berlin Wall – the most powerful symbol of the division between Communist Eastern Europe and the capitalist west – came crashing down.

The once vice-like grip of Communism had been loosening across Eastern Europe since Mikhail Gorbachev’s reforms of the Soviet Union had begun in 1985, and when Hungary opened its borders with Austria in May 1989, some 30,000 East German refugees wasted no time in fleeing to the west.

After the fall of hard-line leader Erich Honecker, and 28 years after the wall was built around the British, French and American sectors in the west of Berlin, East German authorities finally bowed to the inevitable and allowed citizens to cross into the west through the checkpoints.

Border guards – apparently unaware of the hurried directive – were soon vastly outnumbered and stood by as checkpoints were inundated with refugees, new crossing points were torn open and East Germans gleefully climbed onto the wall and began to chip away at the hated edifice.

On the other side of the wall - and as the video above shows - West Germans were waiting to greet their fellow Berliners with flowers and champagne and start a party – and a process – that within a year would see Germany reunited and which would eventually see Berlin reappointed as the German capital for the first time since 1949. 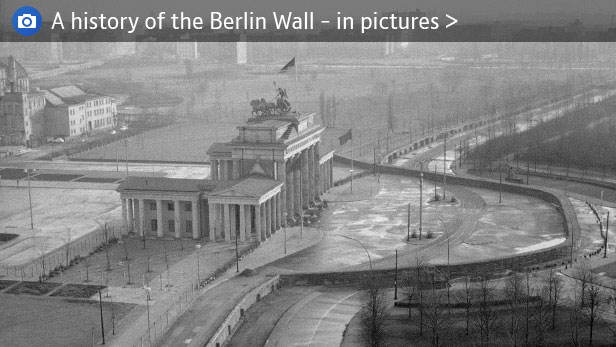