More than 400 years after it sank in the Solent, the remains of the Mary Rose - the pride of Henry VIII's navy - were raised from the seabed.

The remains of the Mary Rose, a battleship of the English navy in Tudor times, was salvaged from the bed of the Solent on this day in 1982, some 437 years after she sank.

The recovery of the vessel - Henry VIII’s naval flagship – had taken 11 years and cost some £4 million to achieve, and was even then jeopardised through technical issues with the complex apparatus used in the salvage operation.

The ship’s hull had already been emptied and braced, then attached to a frame that was gradually lifted to take its remains off the sea bed. A huge crane was then used to lift them onto a specially-constructed cradle, cushioned with air bags.

With a number of small boats in attendance filled with spectators – including Prince Charles, President of the Mary Rose Trust - the raising of the cradle, hull and lifting frame began early on the morning of October 11, with the timbers of the ship breaking the surface at 9.03am.

As they did so, a cannon was fired from the ramparts of Southsea Castle, where the king had stood and watched his flagship keel over four centuries earlier. 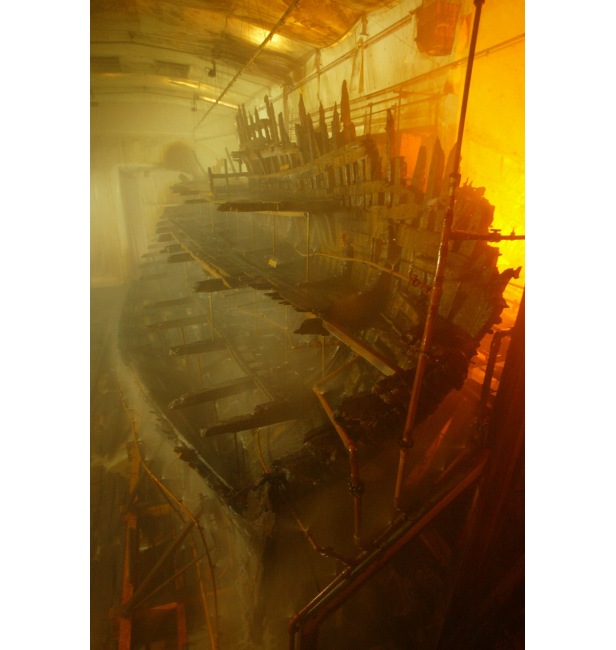 The Mary Rose was sunk in the Solent off the Isle of Wight in 1545, on its way to engage the French fleet off Portsmouth Sound – probably as a result of a handling error rather than enemy cannon fire, as was originally assumed.

Though parts of the wreck of the ship were first identified in 1836, it was not until 1971 that the remnants of its main structure were properly identified by the ‘Mary Rose Committee’, who were determined that it should be salvaged in the public interest rather than for commercial gain.

Throughout the 1970s, the ship’s remains were meticulously surveyed, excavated and recorded using the latest methods in maritime archaeology. Over 26,000 artefacts and pieces of timber were salvaged, along with remains of about half of the crew members that had perished when it sank.

Despite a heart-stopping moment when part of the lifting cradle collapsed and caused slight damage to the hull, the remains of the Mary Rose were transferred to shore and began a lengthy preservation process.

The preserved hull is now on display in Portsmouth Dockyard. A selection of the remarkable artefacts collected from it can be seen in the nearby purpose-built Mary Rose Museum, which was opened in May 2013.

The Mary Rose - Did you know?