The world held its breath as a two-month rescue operation to free trapped Chilean miners ended with all 33 being lifted to the surface.

Thanks to an incredible rescue operation – and their own sheer will – the group of Chilean miners known as ‘Los 33’ were brought safely to the surface on this day in 2010 after spending over two months trapped 2,000ft below ground.

Thursday August 5 had begun as a normal weekday shift for the 33 miners working in the 121-year-old San José copper-gold mine, set in a mountain in Chile’s Atacama Desert.

But around lunchtime, a rock later said to be "twice the weight of the Empire State building" fell from the mountain – and caused the mine to cave in. All 33 men were sealed inside: trapped 2,300ft below ground, three miles from the mine's entrance.

The Chilean government took over the search and rescue operation from the mine’s owners, Compañía Minera San Esteban – a company which had ignored warnings about unsafe working conditions in its mines – and for days, the miners were feared dead.

But 17 days after the accident, a drill bit broke through into the mine, near to an emergency shelter where it was thought the men were sheltering. When the drill was pulled out, it had a note attached to it. Written in bold red marker pen were the words: “Estamos bien en el refugio, los 33” (“We are well in the refuge, the 33”). 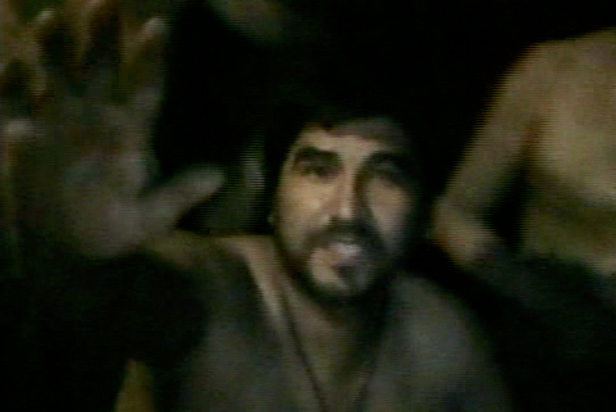 Chile called in the assistance of American drilling companies, multi-national corporations and even Nasa for the rescue plan, which incorporated care for the trapped miners as well as the effort to bring them to the surface. The world’s media joined the men’s families and the rescue team above ground, in a makeshift tent city dubbed Campo Esperanza (Camp Hope).

Below ground, the 33 miners – led by their foreman Luis Urzúa – worked as one, organising themselves into work shifts, dividing their emergency food supply equally, looking for escape routes, keeping up morale and participating in daily prayer sessions. They drank filthy water and lived on a daily ration of 300 calories; but in the midst of their terrible conditions, worked hard to stay in good spirits, as was evidenced in the videos they recorded for those above ground.

Three large drilling teams worked consecutively to reach the miners. It was Plan B – started on September 5 using a Schramm T130XD operated by a team of Chilean and American drillers – which reached them first, breaking through on October 12. Horns sounded and bells rang: after more than two months trapped underground, the lifeline for the miners had arrived.

The operation to bring them to the surface was dubbed Operación San Lorenzo, after the patron saint of miners. An escape capsule – called Fenix (The Phoenix) and painted in the colours of the Chilean flag – was to be lowered and raised in the drilled shaft by a giant crane. The capsule was equipped with an intercom and oxygen supplies, and each man had to wear a harness while inside it, as well as sunglasses to avoid damaging their eyes when they faced daylight for the first time in more than two months.

Ahead of their rescue, the trapped miners were divided into three groups (‘hábiles’ – skilled; ‘débiles’ – weak; and ‘fuertes’ - strong) to determine the order they would be rescued in, as medics decided that the first few men to be brought to the surface should be those deemed to be fittest – both physically and mentally – followed by those who were least healthy. 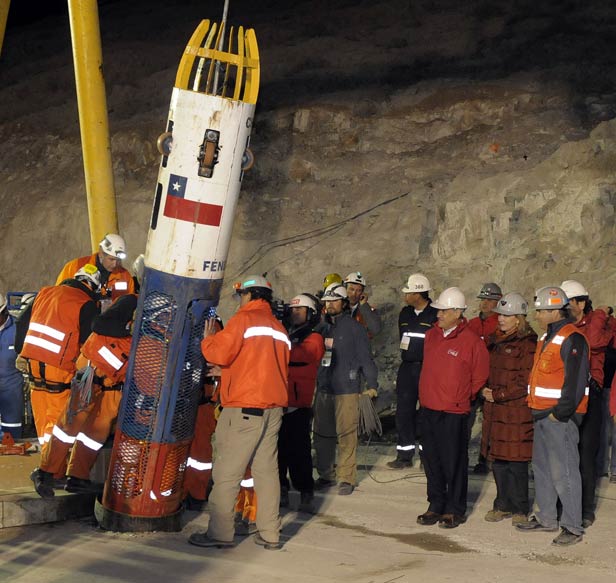 The rescue operation began at around 2.15am GMT on October 13, with the first rescuer, Manuel González, being lowered into the mine (pictured above). He arrived in the collapsed mine around 18 minutes later – and the first miner, Florencio Ávalos, entered the capsule to be winched to safety.

It took just under 24 hours in total to rescue all 33 miners, each coming to the surface to a round of applause and tears from family members, rescue workers, family members, the world’s media – and Chilean president Sebastián Piñera.

It was 54-year-old foreman Urzúa – the man credited for maintaining morale and order among the men – who was the last to be rescued.

"I've delivered to you this shift of workers, as we agreed I would," he told President Piñera as he embraced him.

"I gladly receive your shift, because you completed your duty, leaving last like a good captain," replied the president – adding: "You are not the same after this, and Chile won't be the same either. You were an inspiration."

Below ground, the six rescue workers held up a banner saying ‘Mission completed’ – and were then winched to the surface themselves.