DuPont’s revolutionary polymer was officially announced to the public in New York City on this day in 1938.

Nylon may have been patented in 1935 but it wasn’t until this day in 1938 that the innovative polymer was introduced to the public in New York.

In simple terms, nylon is a versatile plastic which can be used to make any number of everyday objects, as well as being fashioned into fibre form to make fabric. We use the term nylon to talk about what is in fact a group of synthetic polymers (large molecules with repeating chemical structures), all in the nylon family. The first of these – nylon 6,6 - was developed by chemist Wallace Carothers working for DuPont in 1935. Different forms of nylon have different practical applications.

Nylon 6,6 was made by reacting two different petroleum-derived chemicals, hexamethylenediamine and adipic acid, in the process of condensation polymerisation (so called because the process gives off water).

It was patented in 1938 and the first commercial product to use nylon came on the market in February of that year in the form of Dr West’s Miracle-Tuft – a toothbrush with nylon bristles. However, the synthetic fibre used was not called nylon, but Exton.

After its initial use in toothbrushes, nylon was officially introduced to the public on October 27, 1938 at the site of the future 1939 World’s Fair in Flushing Meadows, New York. 3,000 members of the Women’s Club were the audience for a talk called ‘We Enter the World of Tomorrow’. 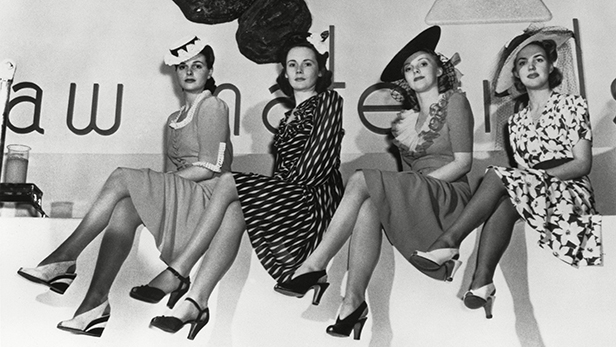 Women were, indeed, a key market for nylon products. Soon after it entered mass production, the revolutionary fibre would be seen as a replacement for costly silk in stockings – and the term ‘nylons’ would become synonymous with stockings.

During World War II production switched to focus on defence products including parachutes, but nylon soon became one of DuPont’s most successful, profitable products. Just eight days after Japan surrendered in 1945, DuPont announced that its factories would return to making nylon stockings, but demand far exceeded supply and production delays led to riots in US stores as women fought over the few pairs of nylons that had reached the shelves.

Why is nylon called nylon?

Many believe that the name is an amalgamation of New York (NY) and London (Lon), but this is in fact incorrect.

The Oxford Dictionary notes that nylon is an “invented word, on the pattern of cotton or rayon”. This was, indeed, the rationale DuPont themselves gave in 1940. However, in 1978, the company said that the polymer was originally intended to be called Nuron, spelling “no-run” backwards i.e. no breaking or unravelling. However, there were trademark conflicts with the name, so it was changed letter by letter until they came up with the agreeable – and memorable – nylon.

Nylon – did you know?
Print this story
Back to top