South African anti-apartheid activist Steve Biko died of a brain haemorrhage three weeks after being arrested and interrogated under the Terrorism Act.

Leading anti-apartheid figure Steve Biko died in police custody on this day in 1977 – sparking outrage across South Africa and the world.

Biko was 30 years old when he died in police custody. The high-profile activist and former medical student had been active in the anti-apartheid movement since the 1960s, setting up and becoming president of the South African Students’ Organisation (which later evolved into the Black Consciousness Movement). In 1972, he was expelled from his university because of his political activities, and a year later was banned by the government from writing or speaking publicly, and restricted to his home town.

He was arrested under the Terrorism Act on August 18, 1977, and interrogated by police in Port Elizabeth for 22 hours. Tortured and beaten, he suffered a major head injury which resulted in a coma. On September 11 he was transferred, naked and shackled, in a police van to Pretoria prison, over 600 miles away. He died shortly after arriving at the prison’s hospital the following day – the 20th person to die in South African police custody in 18 months.

The police claimed that Biko died during a hunger strike – but an autopsy revealed that his death was caused by a brain haemorrhage, the result of massive injuries to the head, and that he had been covered in multiple bruises and abrasions. An inquest held into his death in November 1977 cleared the police of any wrongdoing. 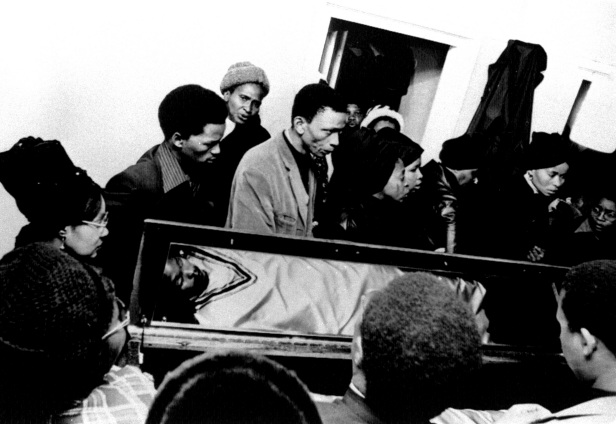 The South African newspaper editor Donald Woods, who was a close friend of Biko’s, led the campaign to expose the cover-up over his death. He was placed under a five-year ban as a result, but escaped with his family to London, where he became an active anti-apartheid spokesman and campaigner. His books about the life and death of Steve Biko were adapted into the acclaimed 1987 film Cry Freedom.

The Truth and Reconciliation Commission – set up by the ANC-led government and led by Archbishop Desmond Tutu – denied amnesty to the five policemen accused of killing Steve Biko in 1999. In 2003, it was announced that they would not be prosecuted due to insufficient evidence and because the 20-year time limit for prosecution had elapsed.

On the 20th anniversary of Biko’s death, President Nelson Mandela paid homage to the man he called “one of the greatest sons of our nation”.

“It is the dictate of history to bring to the fore the kind of leaders who seize the moment, who cohere the wishes and aspirations of the oppressed,” he said. “Such was Steve Biko, a fitting product of his time; a proud representative of the re-awakening of a people.”

Cry Freedom - Did you know?