Eleven months after he declared "Peace for our time" on his return from Munich, Prime Minister Neville Chamberlain announced that in response to Germany's invasion of Poland on September 1, the countries were now at war.

Prime Minister Neville Chamberlain announced that Britain was at war with Germany on this day in 1939.

Chamberlain’s announcement that the country was at war came two days after Hitler’s troops had invaded Poland. Britain and France had agreed to help Poland in the event of a German invasion – and when Hitler ignored their ultimatums, both countries declared war on Germany.

Shortly after 11am, the ‘voice’ of BBC radio, Alvar Lidell, announced: “At 11.15, that is, in about two minutes, the Prime Minister will broadcast to the nation. Please stand by.”

Then, in a live broadcast from the Cabinet Room of 10 Downing Street, Chamberlain told the British people:

“This morning the British ambassador in Berlin handed the German government a final note stating that unless we heard from them by 11 o'clock that they were prepared at once to withdraw their troops from Poland, a state of war would exist between us. I have to tell you now that no such undertaking has been received, and that consequently this country is at war with Germany.

“You can imagine what a bitter blow it is to me that all my long struggle to win peace has failed.” 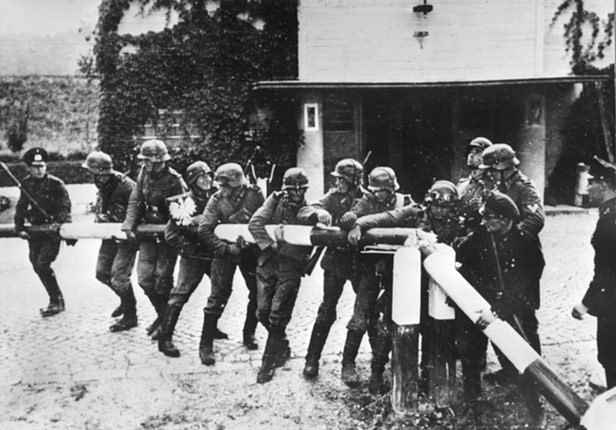 Hitler’s actions, said Chamberlain, “show convincingly that there is no chance of expecting that this man will ever give up his practice of using force to gain his will. He can only be stopped by force.”

“We have a clear conscience,” he continued. “We have done all that any country could do to establish peace.

“But the situation in which no word given by Germany's ruler could be trusted, and no people or country could feel itself safe, had become intolerable. And now that we have resolved to finish it, I know that you will all play your part with calmness and courage.”

[January 31, 1943: Stalingrad falls to the Red Army after five months of bloody conflict]

Within moments of Chamberlain’s address, air raid sirens sounded across Britain. “This was an opportunity for the people of Britain to demonstrate their traditional calm in the face of danger,” a Movietone Newsreel later reported.

“There was no sign of panic – men and women in the streets made their way to the nearest shelter and queued up in orderly processions at the entrances.”

British armed forces had already been mobilised following the invasion of Poland; but it wasn’t until the declaration of war that the National Service Act was enacted, immediately enforcing full conscription for all men between 18 and 41. Chamberlain also restructured his existing Conservative government to create a War Cabinet, with Winston Churchill returning as First Lord of the Admiralty.

The same day, King George VI addressed those in Britain and across the Empire. Speaking in a live broadcast from Buckingham Palace, he called upon "my people at home and my peoples across the seas" asking them “to stand calm, firm and united in this time of trial.

“The task will be hard. There may be dark days ahead, and war can no longer be confined to the battlefield. But we can only do the right as we see the right and reverently commit our cause to God.

“If one and all we keep resolutely faithful to it, ready for whatever service or sacrifice it may demand, then with God's help, we shall prevail.”

The Real King’s Speech – Did you know?
Print this story
Back to top