Russia’s Mir space station – launched during the Cold War but later a symbol of international collaboration – broke up over the South Pacific after a 15-year mission.

Mir, the pride of the Soviet space programme and at one time the largest spacecraft in history, re-entered the Earth’s atmosphere and fell into the South Pacific on this day in 2001.

The 15-year history of the space station, whose name means Peace' in Russian, included collisions, a fire and – back on earth - massive political change, but given that it was originally planned as a five-year mission, the project could be declared a success.

Concerns had been raised over safety on board Mir in February 1997, when a fire in an oxygen generator filled the station with toxic smoke for around 45 minutes.

To make matters worse, some of the respirator masks on board were broken, and cosmonauts found that some of the fire extinguishers were fixed to the walls and couldn’t be removed.

In April of the same year a Progress cargo vessel collided with the station on docking, piercing the module that contained the American living quarters and forcing it to be permanently sealed off.

A resultant loss of power from the now redundant solar arrays attached to the module caused Mir to power down and left it drifting in space until repairs could be made. 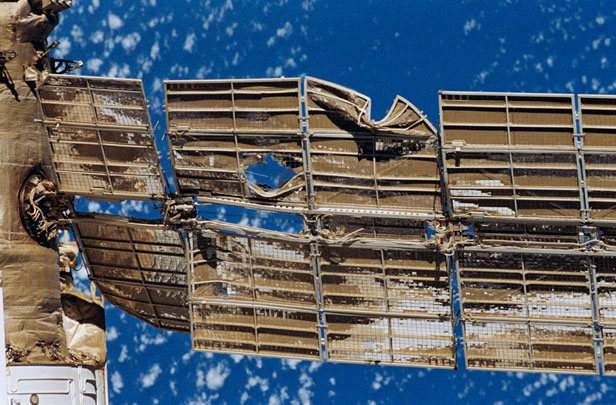 Leaking coolant pipes and constant computer crashes put cosmonauts’ safety further at risk, and in July 1998, the Russian space agency, Roskosmos, announced that the station would be taken out of service in June 1999.

Mir received a stay of execution as authorities sought alternative funding, but although a privately funded mission in April 2000 looked at the possibility of converting Mir into the first orbital movie studio, Russia’s commitments to the International Space Station (ISS) meant there was no money to support the ageing Mir.

The station was taken out of orbit in the early hours of March 23, 2001. As its 130-tonne frame burnt up above Fiji, Mir’s legacy was already assured, as technicians and astronauts from Russia, the US and other nations set to work on the ISS using knowledge gleaned from Mir’s own lengthy mission.

Mir – Did you know?
Print this story