May 10, 1961: Bennett, Cook, Miller and Moore launch satire boom with Beyond the Fringe

Four Oxbridge graduates brought their irreverent humour to the West End stage and started a satire revolution that influences British comedy to this day.

The ground-breaking revue Beyond the Fringe, starring Oxbridge graduates Alan Bennett, Peter Cook, Jonathan Miller and Dudley Moore, opened at the Fortune Theatre, London on this day in 1961 – and started something of a revolution in humour.

Marking a major shift in topics that were deemed acceptable targets for comedy (and acceptable to find funny), the revue’s sketches mined humour from hitherto off-limits areas such as the idiocy of leading politicians, religion, the waning British Empire, and even the threat of nuclear war.

Robert Ponsonby, Artistic Director of the Edinburgh International Festival, had set up the show nine months earlier as a competitor to the many late-night comedy revues that were part of the city’s simultaneous ‘Fringe’ Festival, using the cream of comedic talent from Oxford and Cambridge.

Ponsonby’s assistant John Bassett suggested the involvement of fellow jazz musician Moore, who in turn brought in Bennett.  Miller recommended that Cook – who, despite being a recent graduate had already penned another West End revue – should be brought into the group. 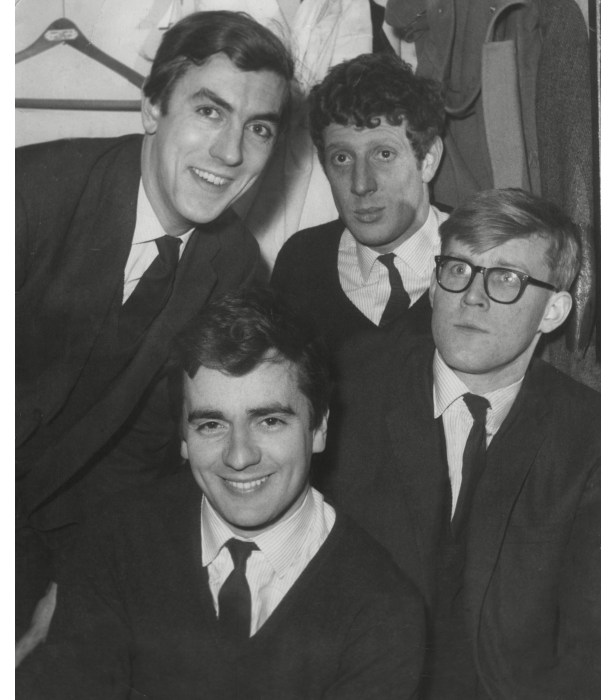 These four very different young men created a show whose comedic reverberations would be felt for years – though none claim to have set out to push back boundaries, but rather to simply write sketches that they found funny.

Beyond the Fringe was an immediate success, thanks in no small part to a strong review from eminent critic Kenneth Tynan, and would run for more than four years in London despite its original cast transferring the show to Broadway in late 1962.

Its irreverent treatment of many sacred cows would have a significant effect on British comedy in particular, launching the ‘satire boom’ which incorporated television programmes such as That Was The Week That Was and the Frost Report, Private Eye magazine, and Cook’s Establishment nightclub.

[May 28, 1951: Influential comedy troupe The Goons make their radio debut]

[October 5, 1969: And now for something completely different – Monty Python’s Flying Circus takes off]

Beyond the Fringe - Did you know?
Print this story
Back to top