Condoms full of purple flour were flung at Tony Blair as he faced MPs in the House of Commons on the day in 2004.

The first fell at his feet and the other exploded off his shoulder, sending flour wafting through the hallowed chamber.

The incident forced Prime Minister's Questions to be abandoned and MPs were asked to swiftly vacate the area.

The projectiles were thrown from the gallery reserved for VIPs and guests of MPs or peers. Two men were immediately arrested.

Campaign group Fathers 4 Justice claimed responsibility, saying the stunt was designed to draw attention to their fight for better access for divorced fathers to their children.

Despite the innocuous nature of the attack, the implications were extremely serious - it came just weeks after the public gallery was glassed off to protect MPs from lobbed phials of deadly toxins such as anthrax or ricin.

Indeed, after MPs had evacuated the chamber, police officers in chemical and biological suits checked whether the purple haze was dangerous.

It soon emerged that the two perpetrators gained access to the open-faced VIP gallery as guests of Labour peer Baroness Golding, and she offered "unreserved apologies" to the Speaker, MPs and fellow peers. 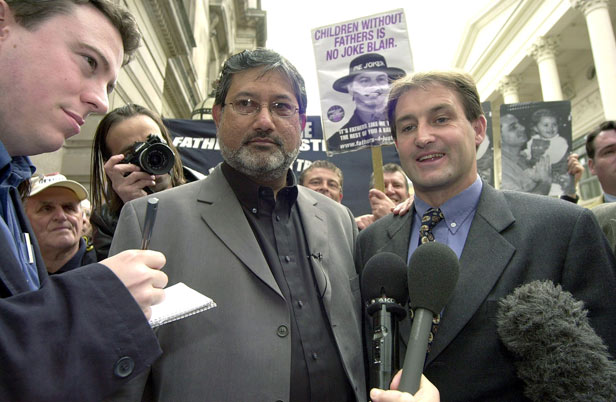 The flour bombs were thrown by Ron Davis (above, centre), from Worthing, West Sussex, who was campaigning for access to his two children. He had recently raised his case with the Prime Minister during a radio station phone-in but declared himself dissatisfied with Blair's "bland" response.

His accomplice, Guy Harrison (above, right), also from West Sussex, held up a Fathers 4 Justice poster during the attack.

Davis and Harrison were both convicted of disorderly behaviour and fined £500 and £600 respectively.

[May 2, 1997: Labour win general election by a landslide to end 18 years of Conservative rule]

Fathers 4 Justice - Did you know 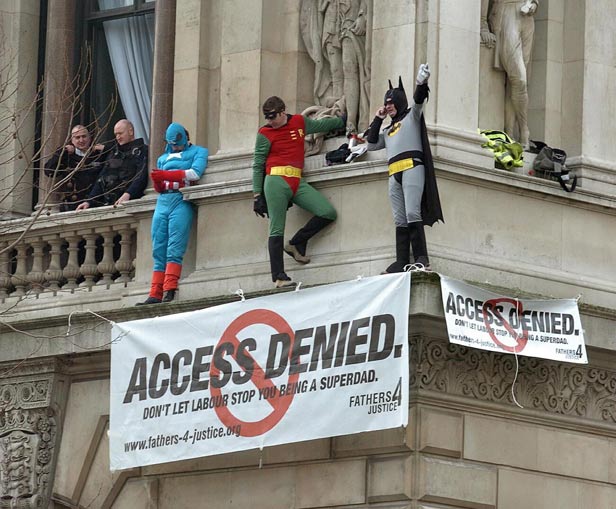