From Edison to Happy Days: 12 amazing facts about jukeboxes

Vinyl is making a comeback - and so is the jukebox. Here are 12 facts you might not know about the automatic record players.

Jukebox music machines were a staple of pubs and cafes all over the UK and America in the 50s, 60s and 70s, allowing music fans to pay to listen to their favourite tunes.

They are now thriving again thanks to a retro revival.  But how did they start? What else is there to know about these magical machines? Find out, with our amazing facts about jukeboxes.

The roots of the jukebox can be traced to 1877 and Thomas Edison (below), the man behind the camera and the light bulb. He invented the phonograph, a music device that could play recorded sound. 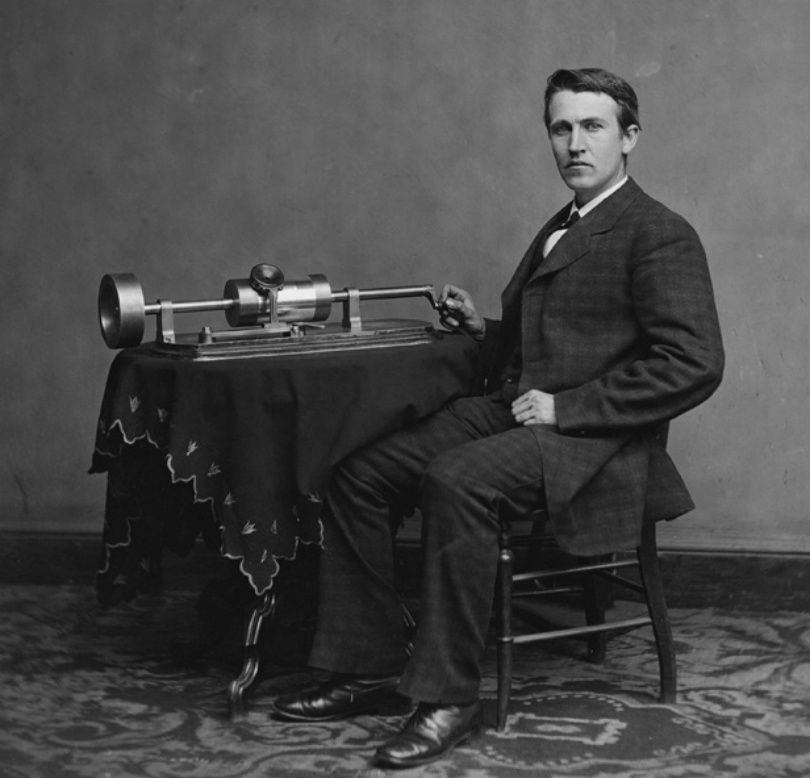 On November 23, 1889 Louis Glass and William S. Arnold opened the first phonograph parlour at the Palais Royal Saloon in San Francisco. The 'nickel-in-the-slot' (later shortened to ‘nickelodeon’) Edison Class M Electric Phonograph was coin operated and let multiple people listen to the same song through four stethoscope-style tubes. The price to listen was five cents. Don't worry, they'd thought about hygiene – customers were given towels so they could wipe the end of the tube after the previous person.

In 1906 John Gabel created the Automatic Entertainer, which replaced the wax cylinder with 78rpm disc recordings and offered a selection of records to play.

[Read more: What happens when young kids try a record player for the first time...]

The invention of the electric amplifier pushed the jukebox into the mainstream because it allowed a large group of people – a whole cafe, say – to listen to the same music. AMI's Amplified Machine was invented in 1927, and soon took off, selling 50,000 units in its first year.

The biggest-selling jukebox of all time – and perhaps the image of a jukebox in most people’s minds - is the Wurlitzer 1015 (below), introduced in 1946. Wurlitzer models featured flashing coloured lights and bubble tubes, helping them become the centrepiece of any establishment. 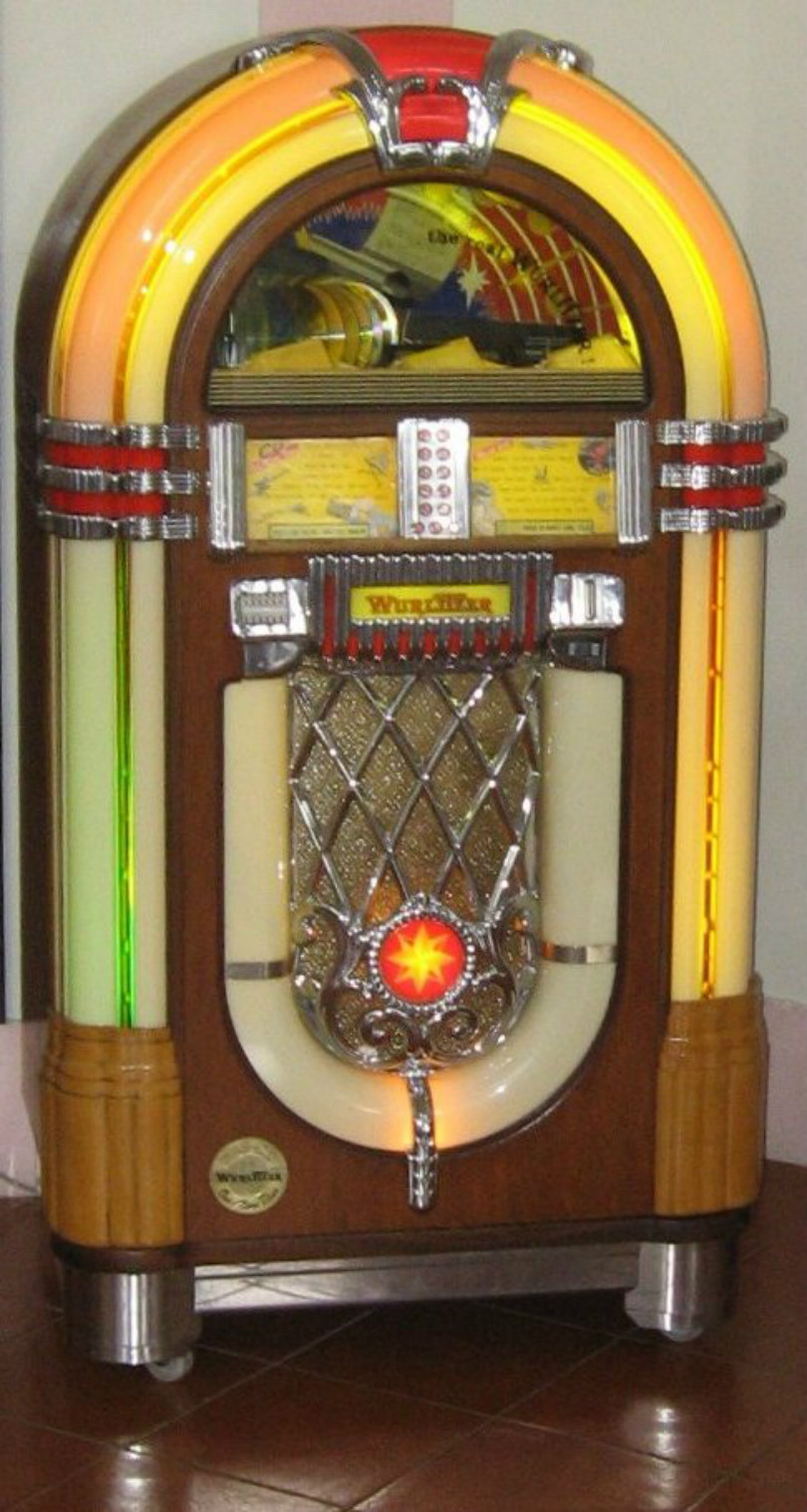 The Wurlitzer One More Time jukebox is a modern-day model based on the Wurlitzer 1015, and costs around £10,000!

The 1948 Seeburg Select-O-Matic 100 was the first jukebox to offer 100 records. The varied mix of genres meant punters could listen to R&B, rock and roll, country and folk in the same venue. 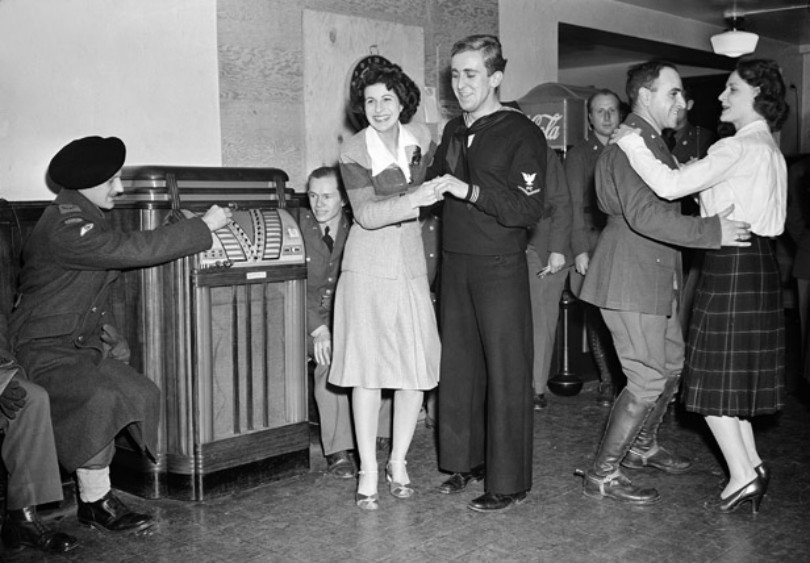 Originating in around 1940, the word jukebox is allegedly of insalubrious provenance. The word 'juke' comes from the West African word 'joog' meaning disorderly or wicked. It was originally American slang for a brothel. These 'juke joints' or 'juke houses' played music, so when the first jukeboxes emerged the name caught on, much to the dislike of the jukebox manufacturers.

One of the world’s most familiar jukeboxes was the Seeburg MC100C that appeared on the intro credits to Happy Days.

Jukeboxes hit their height of popularity in the mid-1950s. At that time, around 750,000 of them were in use across America.

During the 1950s sales declined, partially after the invention of the transistor radio, the first affordable way for people to listen to the radio at home. The popularity of the Sony Walkman in the 1980s furthered the decline.

It's thought that around 250,000 jukeboxes are still used in the US today, thanks mostly to a booming antiques and collectibles