73 years ago this week CS Monarch (3) was sunk, discover more about these boats that help ensure global communication.

On April 16th 1945, the Cableship Monarch was sunk of the Suffolk coast with all crew lost. The reason for sinking is disputed, some claim it was sunk by a Kriegsmarine Seehund U-2324 two-man submarine, others that it was sunk by a mine.

What was the story of the tragic Monarch and the other cable ships that helped carry messages far and wide?

Soon after William Cooke and Charles Wheatstone introduced their working telegraph machine in 1838, attention turned to enabling greater communication between nations overseas. Samuel Morse and Wealdstone were among those first to demonstrate how, with effective insulation, this new technology could work underwater.

The first commercial cable was laid the across the channel in 1850 by the Anglo-French Telegraph Company, using a converted tugboat called Goliath. It commenced a practice that today helps to delivery high-speed internet connectivity around the globe.

Here are some of the most illustrious cable ships. Some helped to make the world a smaller place, while others played a crucial role in assisting the allies in wartime.

All credit to the excellent Atlantic-Cable.com for a wealth of information on the subject of cable ships.

A cable joined France and England for the first time in 1850, thanks to the crew of The Goliath. Starting from Dover, it carried 27 miles of copper (insulated with gutta-percha - latex made from tree sap) to Cape Gris-Nez in France. Successful communications lasted a matter of hours before the fragile cable got damaged overnight.

“I sent the first electric message across the Channel - this was reserved for Louis Napoleon,” wrote John Watkins Brett, who first proposed the submarine cable in 1847.

“I was afterwards informed that some French soldiers who saw the slip of printed paper running from the little telegraph instrument, bearing a message from England, enquired, 'How it could possibly have crossed the Channel?' and when it was explained that it was the electricity which passed along the wire and performed the printing operation, they were still incredulous. After several other communications, the words 'All well' and 'Good night' were printed and closed the evening.” 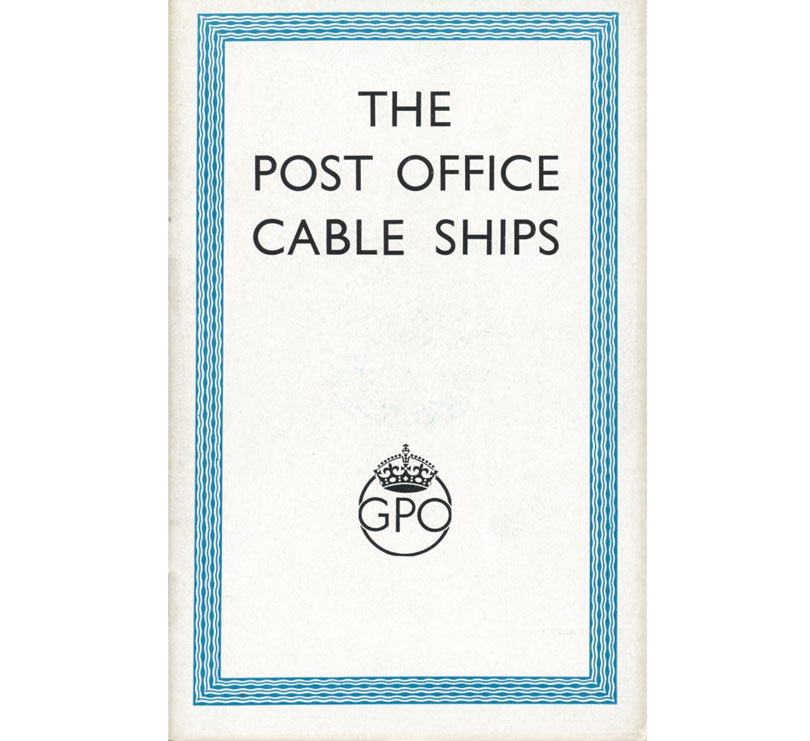 The brief success of Brett’s experiment secured funding for another crack. That attempt, in September 1851, proved a lasting success. A much better-protected cable was manufactured in Millwall by Newell & Company. It was coiled upon the HMS Blazer and became the first commercially successful permanent cable following its delivery to Calais.

Launched in 1871, the ship was purchased by the Submarine Telegraph Company in 1880. The vessel was fitted out as a cable repair ship before the GPO bought it in 1890. Renamed CS Alert, it was responsible for cutting almost all German communication cables almost immediately following the outbreak of World War I.

Because Britain controlled most of the undersea cable network, her ability here was unrivalled. Within two hours of the declaration of war being received on August 5, 1914, the Alert was at sea. A few hours later, German ability to communicate with the outside world was curtailed. 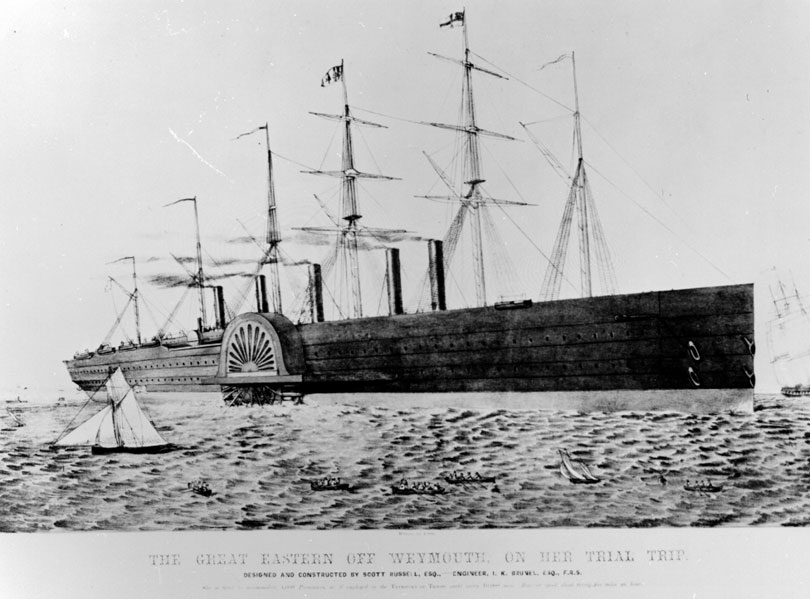 The SS Great Eastern, at the time the largest ocean faring ship in the world, established the first permanent telegraph link between Europe and North America. Following the rapid failure of the 1858 cable, it took another 7 years for another attempt to be made. The Great Eastern took on the mantle and made it to Heart’s Content, Newfoundland in July 1866. Not only that, on the way home, it was able to salvage the first broken cable (by fishing with a grappling hook) and repair it for use as a back up.

HMTS Alert was the second ship to carry the name. It was built for the GPO in 1918 and tasked with repairing undersea cables. Towards the end of World War II, shortly before VE Day, it was dispatched to repair the Dumpton Gap-La Panne cable. On February 24, 1945, it was torpedoed off the North Goodwin Sands and all 59 crew members (and one civilian) were lost. 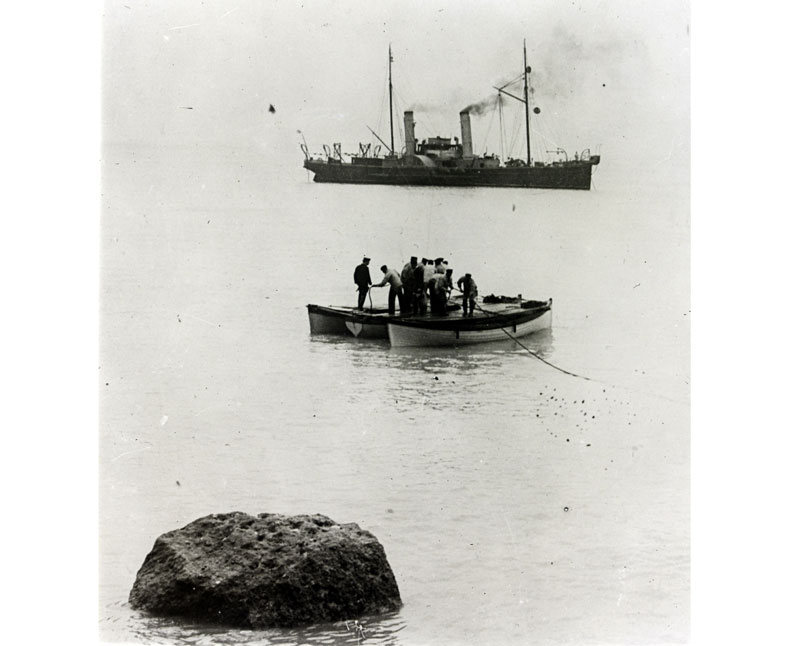 After the war was over, the German cable ship Nordeney (a converted oil tanker) was handed to the GPO as reparations. It was renamed HMTS Alert (3) and remained in service until 1960.

The name Monarch has a storied history in cable laying and repairs. The first ship, CS Monarch (1), was a trailblazer. A former passenger vessel, it was repurposed as a cable ship by the Electric Telegraph Company in 1853. It was the first to be equipped with “picking up gear” and for three years it was the only vessel capable of picking up and repairing cable at sea. 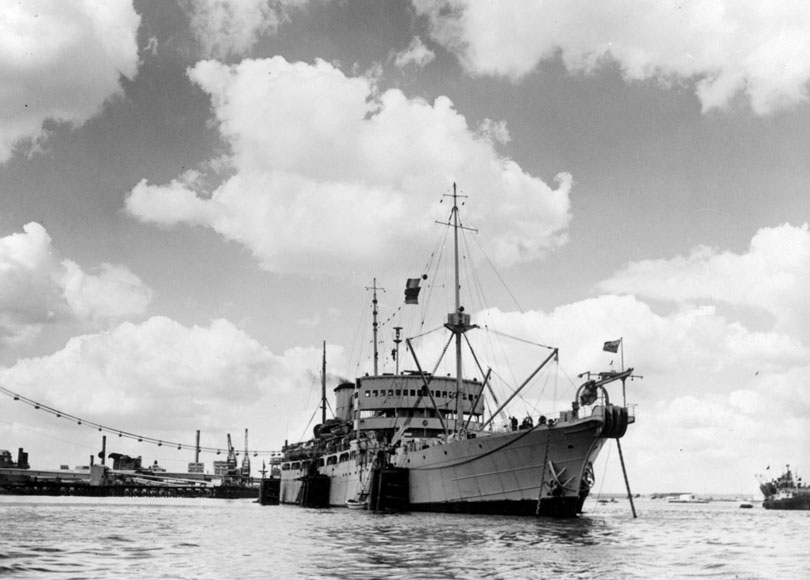 Its 1883 successor, HMTS Monarch (above) was the first cable ship designed specifically for the GPO. It was responsible for cutting German communications with New York in 1914, but was sunk a year later off Folkestone. Its successor HMTS Monarch (3) met the same fate when it struck a mine off Southwold in 1945. The fourth Monarch, built in 1946, was charged with repairing many of the communications cables damaged during WW2.

Fast-forward to the present day and cable ships are still playing a vital role in laying and repairing the cables that join nations and continents. Le Pierre de Fermat, owned by a subsidiary French mobile network Orange, repairs internet cables at sea (via Wired).

These ships have their work cut out: there’s a break somewhere in the world twice a week.