Installing the Windows 10 technical preview on your main PC is far too risky, but there is a much safer way to try out this successor to Windows 8 using ‘virtual PC’ software.

Microsoft released a ‘technical preview’ of Windows 10 at the end of September — an early version of its latest operating system designed to give a taste of what’s in store before it’s released in 2015.

It’s a generally a bad idea to install early versions of Windows on a PC you use for other things, since they’re likely to contain bugs and could well crash on a regular basis. This goes double for Windows 10.

This technical preview isn’t even a beta yet and is really only intended for testing purposes. Worse still, if you upgrade to Windows 10, there’s no easy way to downgrade to an earlier version of Windows, so don’t even think about installing it on your main PC.

If you don’t have a second spare PC to use as a guinea pig, though, there is another risk-free option — VirtualBox.

VirtualBox is what’s known as a ‘virtual PC’ application, which is another way of saying it allows you to simulate a PC in software. Most modern PCs are powerful enough to do this without breaking a sweat and, once VirtualBox is installed, you have a ‘virtual’ PC that can be used just like the real thing.

Operating systems and applications can’t tell the difference between a real PC and a virtual one, which makes a virtual PC perfect for testing software like Windows 10. The advantage is that the virtual PC runs like just another application, so you can keep it open in a window while you do something else. Better still, even if Windows 10 crashes horribly within a virtual PC, you can just restart it and carry on as usual, without affecting your real PC.

There are a few different virtual PC applications available, including a free one for Windows 7 from Microsoft called (confusingly enough) ‘Virtual PC’. VirtualBox is also free, but it works with all versions of Windows (and Mac OS X and Linux) and is very simple to set up. 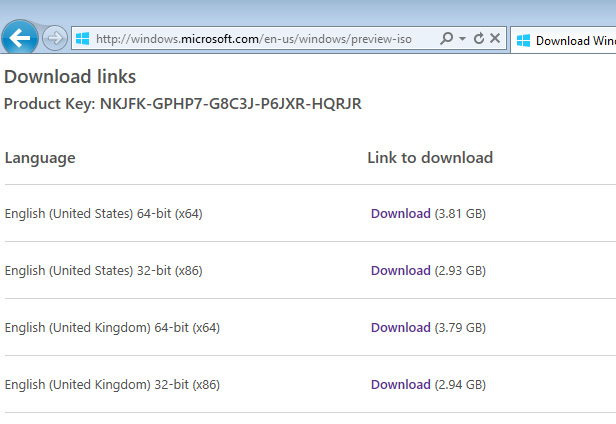 Start by downloading the Windows 10 ‘ISO’ set-up file, since this is likely to take some time. Go to windows.microsoft.com/en-us/windows/preview-iso and scroll down the page to find the download links.

Click to download the ‘English (United Kingdom) 32-bit (x86)’ file. The file is 2.94 GB and will take about an hour on an 8Mbit/s broadband connection, or around 10 minutes with BT Infinity — just take care not to exceed any download limits.

Download VirtualBox from virtualbox.org/wiki/Downloads and, if you’re using a Windows PC, download the file called ‘VirtualBox 4.3.18 for Windows hosts’ (the version number may change, but the file is always first in the list). You’ll need around 16GB of free hard disk space to install Windows 10 within VirtualBox and at least 2GB of memory if it’s to run smoothly. 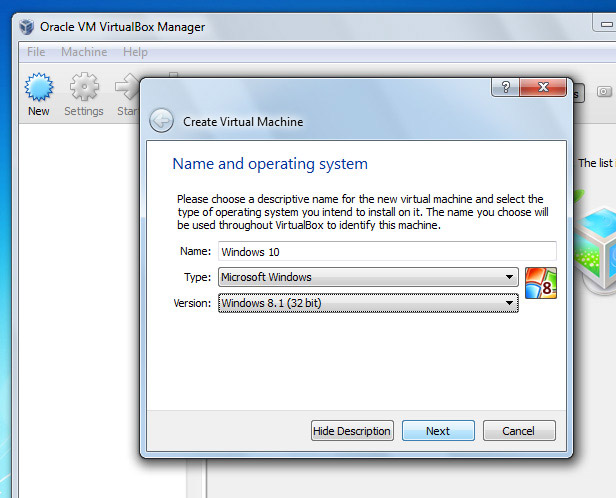 Install VirtualBox with its default settings and run the application. Click the New button at the top-left of its window, name the new virtual PC Windows 10 and select Windows 8.1 (32-bit) from the ‘Version’ drop-down list (‘Windows 10’ hasn’t been added yet). Click the Next button. 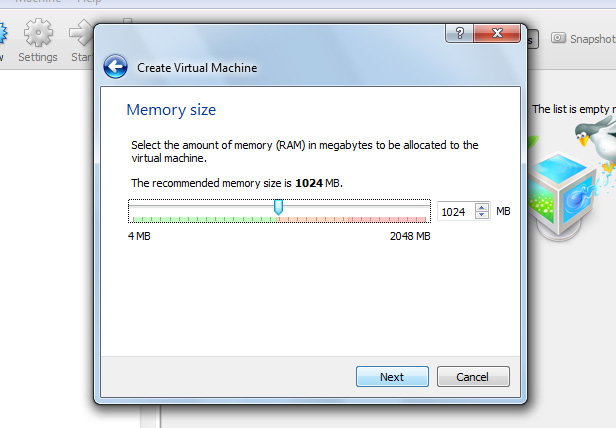 VirtualBox will then suggest an amount of virtual memory for the new virtual PC. This should be 1GB by default, but you can increase this to 2GB if you have at least 2GB of memory in your real PC — just don’t decrease it. Click the Next button. 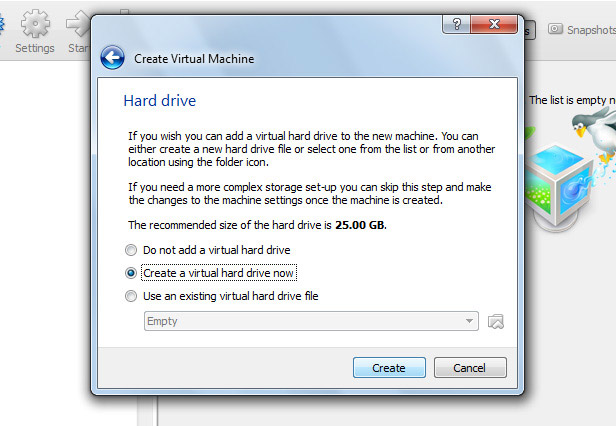 [Read more: Windows 10 – everything you need to know] 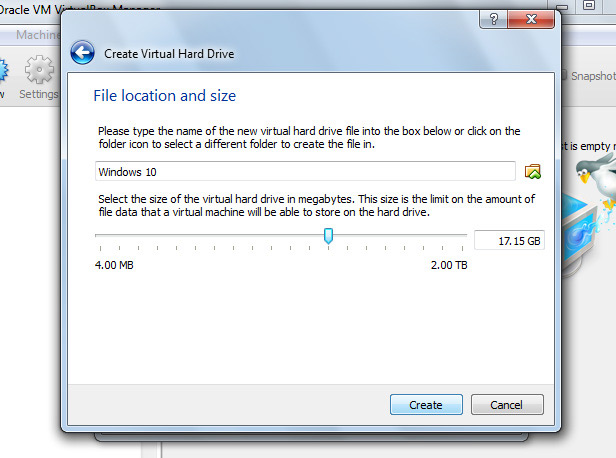 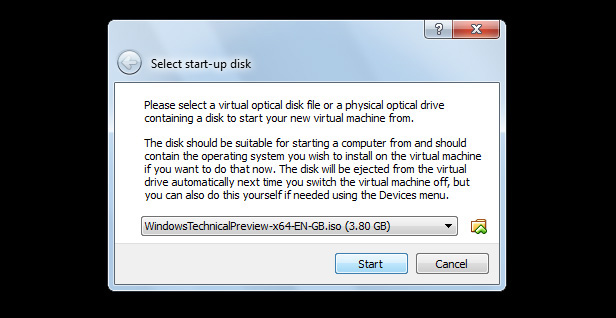 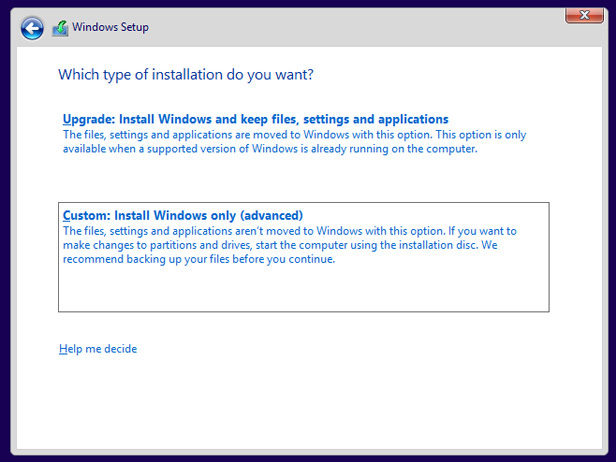 The virtual PC will now boot and Windows 10 will now start to install. Installation is straightforward, but when asked ‘Which type of installation do you want’, select Custom and select Drive 0 Unallocated Space in the window that opens. 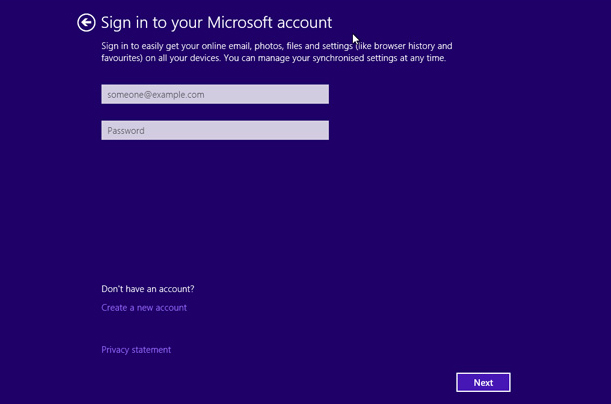 You’ll also need to create and/or sign in to Windows 10 with a Windows account, which should be familiar to anyone who’s used Windows 8. Keep the default settings during the rest of the installation. 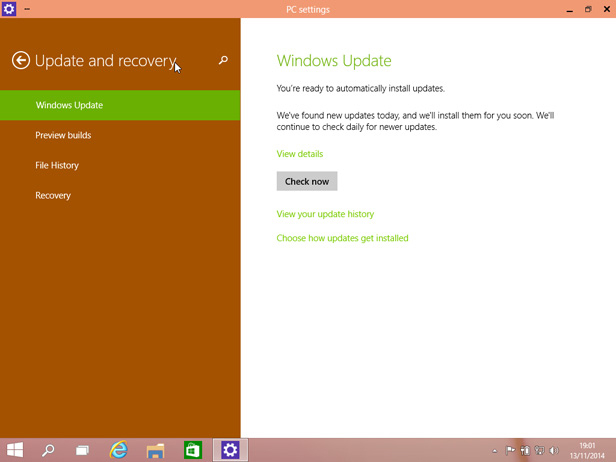 Before long, Windows will be up and running in a VirtualBox window. The first thing you should do is search for ‘windows update’ using the Start menu, select the Check for updates option and install any available updates — and repeat this process until all updates are installed.

We’ll take you through the most important new features in Windows 10 shortly, so stay tuned!