Is it safe to use an old version of Microsoft Office?

Microsoft has just released Office 2016, but some people are still using versions of the suite that are more than a decade old. What risks are they taking?

All software has a ‘lifecycle’. It gets developed, released, updated and eventually abandoned — usually after a new version or two has been released in the meantime. There’s nothing to stop you using software that’s been dropped by its developer in this way, but with no further updates or bug fixes in prospect, you face an uncertain future if something goes wrong with it.

Take Windows XP. Despite the fact it was released all the way back in 2001, and had its support terminated back in 2014, miilions of people around the world still use it. In 2019, it was ranked the fifth most popular operating system in the world.

Anyone still using it is putting their PC's security at risk. But the same goes for anyone using an old version of Office, Microsoft's hugely popular suite of office-based applications. You can see its lifecycle here.

When is Microsoft Office support dropped?

Microsoft Office has been around for decades. Microsoft has obviously long since abandoned older versions of Office. Office 2010 had its mainstream support ended in October 2015 — a five-year lifecycle is usual for all Microsoft software. That means unless any outstanding bugs affect its (or Windows’) security, they won’t be fixed.

The clock then starts ticking for ‘extended’ support, which ends in October 2020. After that, Microsoft won’t issue updates of any kind, and Office 2010 will join Office 2007, Office 2003, Office XP, Office 97 and Office 95 in the hall of obsolete Microsoft Office suites.

Gone, but not forgotten

‘Obsolete’ doesn’t mean ‘useless’, of course, and anecdotal evidence suggests that Office users tend to stick with what they’ve got rather than rush to upgrade to the latest version — unless they’re Office 360 subscribers, that is.

And by ‘anecdotal’ we mean that this piece is being written on Office 2008 for Mac — and we’re sure many of you are still using something older. Office XP (from 2002) still installs and runs perfectly well with Windows 10, for example. But is it really a good idea to keep using Office software that’s so old?

The simple answer, as you might expect, is ‘no’. 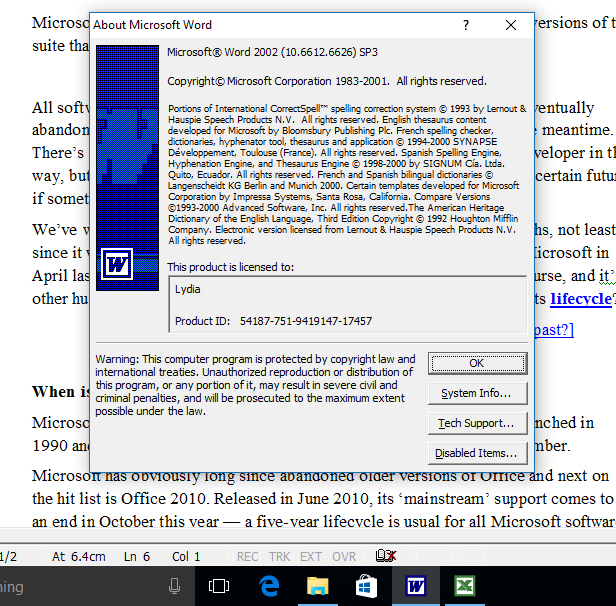 Is an obsolete Office still safe?

Even though you might not miss or want the new features found in later (and still supported) versions of Microsoft Office, and your version of Office 2000 (or whatever) still works perfectly well, you’re putting your PC at risk by using it.

Security weaknesses and bugs in Office, just like in Windows, can be exploited by hackers in a wide range of ways. A modern web browser and up-to-date anti-malware software might be able to intercept many kinds of attacks, but they can still miss one that’s delivered via an infected Word document attached to an email. Word 2016 may stop it in its tracks, but Word 2000, which hasn’t been updated in anyway since 2009? Probably not.

[Read more: Seven easy tips to protect your PC from hackers and malware]

In fact Microsoft only fixed a serious security hole in Office 2007, 2010, 2013 in August, 2015, whereby “An attacker who successfully exploited the vulnerabilities could run arbitrary code in the context of the current user.”

In other words, someone could run a program on your PC without your permission, or knowledge — and that’s a very bad thing.

Upgrade, switch or suffer the consequences

So while it’s easy to treat advice like this as just another way to persuade people to spend more money with Microsoft, the bottom line is simple. If your version of Office is no longer supported and updated, you’re putting your PC at risk by using it.

For now, that means if you’re still happily using Office 2007 and 2010, you can safely continue to do so until 2017 and 2020, respectively — just don’t expect any non-critical bugs to be fixed. Anyone using an older version of Office should seriously consider an upgrade, or switch to an alternative office suite than can still use Microsoft Office files. 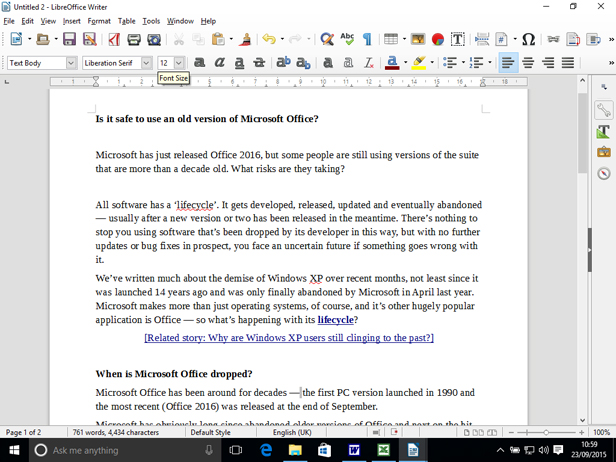