Microsoft Office: Why are there so many different versions and do you really need to pay for it?

The days when you could just ‘buy’ the latest version of Office are long gone, but do you need to pay for it at all? We look at Microsoft’s many options.

Not so long ago, using Microsoft Office couldn’t be simpler. In return for a wedge of cash, you got a box with an installation disc inside and a handful of applications you could use on your PC for as long as you liked, or until you wanted to update to a more recent version.

Things are a bit different today. Microsoft still updates its Office suite on a regular basis – the most recent being Office 2016, which can be bought from the Microsoft Store for around £120.

But buying a ‘copy’ of Office isn’t the only option around. Poke about the Microsoft web site and you’ll see that you can also pay £5.99 a month for Office 365 — which includes Office  — or use Office Online for free. Or if you own an Android or Apple tablet, you can install the free Microsoft Office app instead.

That makes figuring out which version of Office to use and how much it’s worth paying more than a little confusing. But we're here to clear things up.

A one-off price for Microsoft Office Home and Student 2016 may be the best option if you want to pay up front for an office suite. This suite gives you the most recent versions of Word, Excel, PowerPoint and OneNote, meant for one PC only (Mac also comes with Outlook).

Microsoft added a number of new features to Office, including the ability for multiple users to edit one document together.

£5.99 a month gives you one copy of the software to install on one computer (and you can switch at will, if you want), or £7.99 gives you software to share with six people including smartphones and tablets — but more on those later. £5.99 a month — or £59.99 a year — isn’t a bad deal, Even so, you’ll still pay less if you buy Office outright and use it for two years, but you will be stuck on that version. Office 365 subscribers, on the other hand, get to use the latest version of Office as soon as it’s released.

Something else worth bearing in mind is that Office 365 is also often bundled with other products, search ‘Office 365 laptop’ on Amazon and other sites.

If you only use Microsoft Office occasionally on your PC or Mac, or even a computer with another operating system then you might not need to pay for it at all.

Office Online provides web-based versions of most Office apps and although they’re ‘lightweight’ versions that lack some features, few people are likely to miss them. More importantly, the apps are free to use. Since they’re web-based, Office Online apps work best with cloud storage, but non-paying users still get a 5GB of space via Microsoft OneDrive. The only catch is that you can’t upload existing documents from your computer from within the apps themselves, but dragging files to cloud storage is a simple extra step.

It sounds too good to be true, but Microsoft also offers a version of Office for Android, Apple and Windows smartphones and tablets that you can use for free. The versions of Word, Excel, PowerPoint, Outlook and OneNote are a good deal simpler than their PC counterparts, but they look very similar and are still very capable. 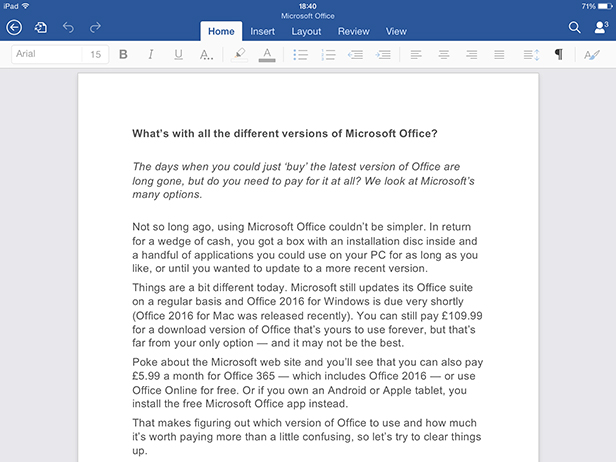 The catch is that you need an Office 365 subscription to unlock the full features in the apps, but that only means you’ll then be able to save and open documents using Microsoft’s cloud storage for businesses. If that sounds like something you won’t ever need, then you’d be right, which makes Microsoft Office for Mobile Devices a brilliant freebie.

Don’t just think you’re tied to Microsoft Office, even if you need to edit Office documents. Both Google Docs (web-based) and Libre Office (download) can open and save documents in Office format, and both cost nothing to use. 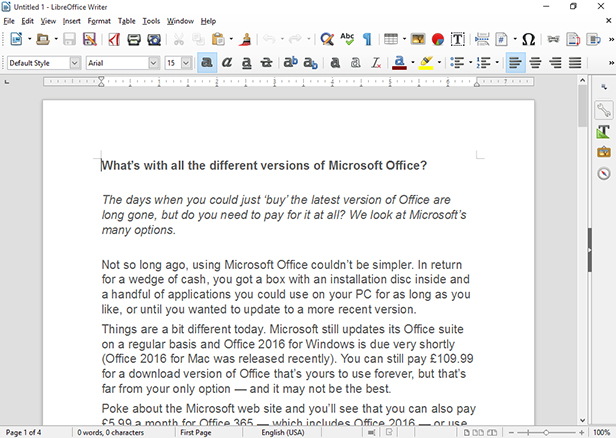