The computer keyboard gets a revamp

Designers in the US have redesigned the humble computer keyboard so that it’s more comfortable and can even control your mouse without lifting your hands from the keys.

From typewriters to teleprinters and personal computers to laptops, the keyboard hasn’t changed much for years. But now designers in the US have created a keyboard they claim is both more productive and more comfortable.

At first glance it looks like a normal keyboard, but the Ultimate Hacking Keyboard splits in two, which allows users to find the perfect typing position for each hand. The two pieces are connected by a cable, which can be expanded to suit different desk spaces.

Ultimate Gadget Laboratories developed the keyboard for those who want to type more productivity, designing it around the first rule of efficient touch-typing, that the hands should never leave the middle row of letters, known as the ‘home’ row. 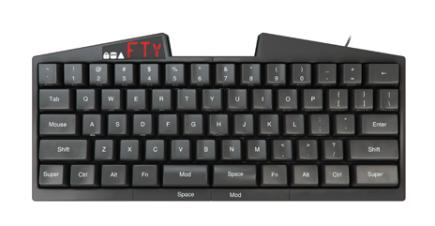 Many modern keyboards split elements such as function keys and multimedia controls into separate sections. This keyboard instead uses layers, which enable each key to perform multiple functions.

The ‘Base’ layer functions like a regular Qwerty keyboard, but instead of a Windows key (or a Command key on Macs) there’s a ‘Super’ key. These controls can all be accessed using a thumb.

Navigation and function keys are found in the ‘Mod’ layer, accessed by pressing one of the two ‘Mod’ keys using our thumbs, strategically placed so there’s less hand movement. Holding down either of the two Fn keys enables users to access the third ‘Fn’ layer, complete with media and volume controls.

Finally, the ‘Mouse’ layer lets you control mouse movements – such as right-click – without having to take your hand away from the keyboard to use the mouse.

Check out the video above to find out more.

Normally when typing, because we only press the spacebar with one thumb, we only use nine of our 10 fingers at a time.  On the Ultimate Hacking Keyboard the Mod, Space and Fn keys are split and can be activated using either thumb.

Even though the keyboard splits into two parts, its manufacturers are keen to stress the Ultimate Hacking Keyboard is durable. Hardened-steel guides and magnets ensure both parts split cleanly, yet will withstand being put together and pulled apart on a daily basis. 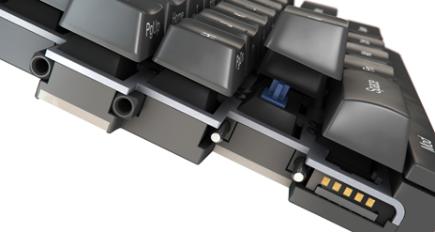 Other features include the ability to create shortcuts and macros (time-saving sequences of keys that activate a function). The designers clearly want to keyboard to last and include detailed repair instructions, should something go wrong.

As a USB keyboard the Ultimate Hacking Keyboard is compatible Windows and Macintosh computers, and with an extra adapter it works with a few tablets and smartphones, but not the iPhone or iPad.

It’s not available just yet, although the makers plan to launch a Kickstarter campaign very soon to raise funds for production and further development. Sign up for updates on the website.

What do you think of the Ultimate Hacking Keyboard? Would you consider using it, if it made you more productive? Let us know below. (via Gizmag).