In 1926, Dr Hugh Mansfield Robinson sent a telegraph to the Red Planet after he claimed to have made telepathic contact with a Martian.

Humans have been trying to find life on Mars ever since Percival Lowell published his maps of canals on the red planet in 1895, but a British psychic made the first attempt to contact the intelligent creatures he believed were living on our planetary neighbour.

Dr Hugh Mansfield Robinson, took the extraordinary step of broadcasting a message across space on October 27, 1926, from a radio transmitter in Rugby, Warwickshire. Find out more today.

Dr Robinson, a former Town Clerk of Shoreditch and a Doctor of Laws, claimed he was an interplanetary psychic and that he’d been in contact with Martians – more specifically, a six-foot, big-eared Martian lady called Oomaruru.

He also claimed that his astral body had already visited Mars before, first in 1918.

The ‘intensely religious' beings on the planet apparently had “large ears sticking out on each side of the head, a huge shock of hair massed high, and a Chinese cast of features”. Men were said to be seven to eight feet tall, while women were over six foot in height. 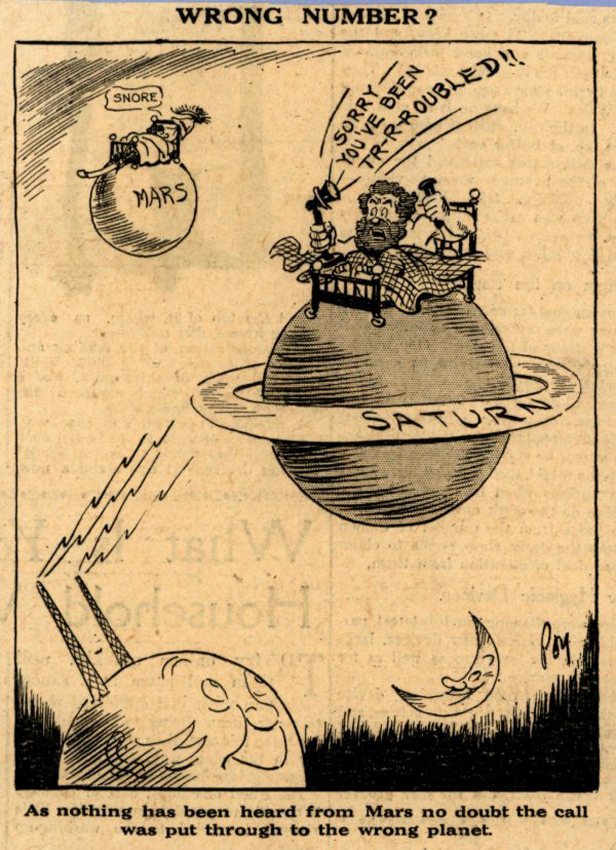 In 1926 astronomers were getting ready to study Mars better than ever before, because the planet was eight million miles closer to Earth than usual, but Dr Robinson had other plans.

He wanted to send out a telegraph to the planet which, apparently written in Martian, read “Opesti nipitia secomba”. Unfortunately, no-one knows the meaning of this message.

Dr Robinson went to the Post Office at St Paul’s, London, where the telegraph operator relayed his message to a transmitter at Rugby. The message was sent at a wavelength of 18,240 metres and cost him 18 pence per word.

He claimed that Martians preferred to reply at 30,000 metres, so receivers listened out on this wavelength, but sadly they detected no response. However, Dr Robinson refused to give up.

“Love to Mars from Earth. God is love,” was the contents of Dr Robinson’s second message, which he sent out two years later.

Unfortunately, there was still no response, which he put down to Mars’ ‘layers of rarified air’.

By this point, Dr Robinson had become the target of cynicism in the newspapers and even from his own wife.

“I don't know anything about this Mars affair,” she said. “I have refused to have the experiments conducted in this house while I remain in it. I don't know whether anyone encouraged my husband but there will be no more of that foolishness in this house.”

Dr Robinson died in 1940, 34 years before NASA's Viking probes made the first successful landing on Mars. Unfortunately, Oomaruru was not there to greet them, and the skies were empty of the Martian airships Hugh claimed to have seen.

[Read more: Visit BT Archives for more information about the history of BT]