Google’s self-driving cars pull over in the rain, while Tesla’s can self-park

Google has been documenting some of the challenges its self-driving cars are facing during testing in the rain.

California is dry for the majority of the year, so winter rain was an opportunity for the cars to learn how to deal with the cold and rain, according to the December report from the Self-Driving Car Project.

Reduced visibility causes some people to get nervous driving in the rain, an issue that also affects cameras and lasers on self-driving cars.

Laser sensors can detect rain, so the cars had to learn to detect objects through raindrops and exhaust on cold mornings.

Google also had to develop a windscreen wiper-like device for the dome of the sensor.

Like humans, the cars drive more cautiously in severe weather conditions when roads are slippery and it’s hard to see.  At the moment if a storm is particularly bad they stop: “For now, if it’s particularly stormy, our cars automatically pull over and wait until conditions improve (and of course, our test drivers are always available to take over),” notes the report.

Google says the self-driving cars will start exploring more challenging environments: “We’re beginning to collect data in all sorts of rainy and snowy conditions as we work toward the goal of a self-driving car that will be able to drive come rain, hail, snow or shine!”

[Read more: Watch a Tesla being driven in autopilot from the back seat]

Summon allows the driver to call their car remotely using a smartphone or key. The vehicle will start and drive to you.

It works in reverse too, parking and turning its engine off, a feature that could be useful for parking in tight spots. 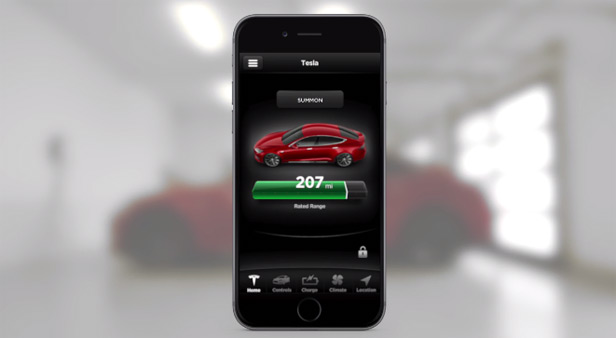 Summon only works over 12ft, but Tesla believes in the future you’ll be able to summon your car over a long range: “Eventually, your Tesla will be able to drive anywhere across the country to meet you, charging itself along the way. It will sync with your calendar to know exactly when to arrive.”

In ~2 years, summon should work anywhere connected by land & not blocked by borders, eg you're in LA and the car is in NY

At the moment Summon is in Beta stage, Tesla wants customers to try it - on private property.