The first of the Royal Navy’s new aircraft carriers is being commissioned in Portsmouth today. Here’s what you need to know about the mind-boggling tech on board.

The brand new Queen Elizabeth Class aircraft carriers are the largest warships ever built for the Roval Navy and have been under construction since 2009, and the lead ship HMS Queen Elizabeth is being commissioned today (7 December) in Portsmouth, in a ceremony attended by the Queen.

In 2020 the HMS will be planned deployment on Initial Carrier Strike Capability The identical sister ship, the HMS Prince of Wales, will follow three years later.

The two ships, which have been constructed at a combined cost of £6.2 billion, will replace the now-decommissioned HMS Ark Royal and HMS Illustrious. They will dock in Portsmouth and will be at the forefront of the UK’s military arsenal for the next half-century.

Here are some startling technical facts about these 21st century nautical marvels.

1. Both the HMS Queen Elizabeth and the HMS Prince of Wales have two propellers weighing 33 tonnes each. Combined they can output 80MW. That’s enough to power 50 high-speed trains.

2. The 280-metre long ships built by the Aircraft Carrier Alliance will have a top speed of 25 knots per hour and can travel 500 miles a day. They have a total range of 10,000 miles.

3. All that grunt is being provided by none other than Rolls-Royce; the 2 Marine Trent MT30 gas turbine generator units provide 48,000 horsepower.

4. The vessels have on-board water treatment plants capable of producing an incredible 500 tonnes of fresh water every single day. While this will quench the crew’s thirst, it is also paramount to the ships’ role of providing humanitarian relief at times of great crisis.

5. The ships’ Phalanx close-in weapons system will be capable of firing 3,000 rounds per minute at incoming adversaries.

6. There are 8,000km of fibre-optic cable on board as well as 250,000km of electrical cable. Members of the crew will have internet access on board the ship, which is handy considering deployments could be up to nine months long.

7. The long-range radar has the ability to track up to 1,000 aerial targets from up to 250 nautical miles away.

8. The Type 997 Artisan 3D medium range radar is capable of tracking a target the size of a snooker ball from 12-miles away.

9. Both ships feature a pair of aircraft lifts that can hoist two F-35 jets from the hangar to the deck in just 60 seconds. The lifts are so powerful they could lift the entire 679-strong crew. 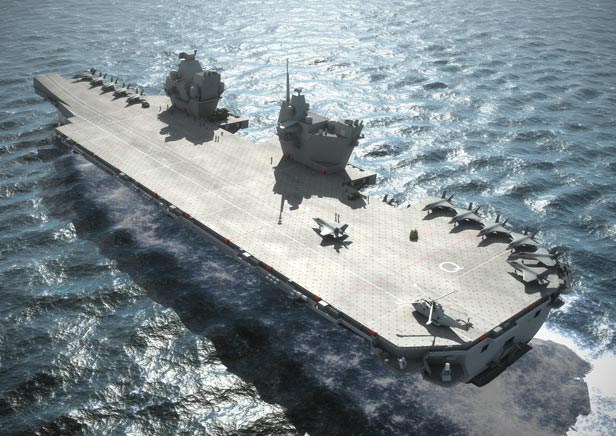 10. The vessels have capacity for 36 of the brand new F35-B Lightning II fighter jets, although only 12 have been ordered so far. The stealth bombers have vertical landing capabilities and deck-landing trials will begin in 2018.

12. The F35 bombers travel at speeds of Mach 1.6, can carry a 15,000lb payload and have a flight range of 900 miles. They’ll take off from a ‘Ski Jump’ ramp that’s six metres high and designed to withstand the same temperatures as a space shuttle

13. The Queen Elizabeth Class ships are the first warships to have a fully integrated waste management system. Designed by Babcock International, it “incorporates a range of technologies and processes for the collection, transfer, treatment, stowage and disembarkation of the various fluid and solid waste streams generated onboard the carriers, ensuring they are either benign and compatible with International Maritime Organisation (IMO) requirements for overboard discharge, or enabling them to be stored efficiently until landed.”

14. The new warships will be docked at HMNB in Portsmouth, where 14 new 30-metre high navigational beacons are being built. These lights will be powered by a combination of solar and battery power, but will only be lit when the ships are approaching or leaving their berths.

The video below shows a CGI representation of the HMS Queen Elizabeth.