If you can make renewable energies work in Antarctica, then you can use them anywhere, according to adventurous father and son team, Robert and Barney Swan.

Trekking in Antarctica is not a feat you undertake lightly. Howling blizzards, frostbite, snow blindness, freezing temperatures and dangerous crevasses all come together to make it one of the most hostile regions on the planet.

But, for father-and-son team Robert and Barney Swan, these horrendous conditions made it ideal for what they had in mind – a 600-mile trek using only renewable technologies to show that anyone, anywhere can use these energies.

Robert, 61, is a veteran polar explorer and was the first person to walk to both poles. His son, 23-year-old Barney, was the trip’s leader, and joining the family duo were mountaineer Martin Barnett and filmmaker Kyle O’Donoghue.

Although Robert had to abandon the icy mission half-way through, the remaining trio completed the trek after 56 days and their adventure became the first 'net positive' polar expedition - putting back more into society and the environment than it took - according to the explorers.

At the South Pole you need to be able to rely on your equipment entirely, as if it fails, you will not survive.

A Nasa ice melter that used solar power to turn snow into water, was essential, but “none of that you could rely with your life on”, said Robert.

“Once it got below -30⁰C [the ice melter] was struggling, and by the end of the expedition we were surviving solely off the Shell advanced biofuels which were great.”

Biofuels are fuels produced from plant material, and for this adventure Shell provided the biofuels that were used to feed the intrepid team.

In Bangalore, India, Shell is producing advanced biofuels from woodchips and waste sugar cane in pioneering process called IH2*. When Robert and Barney visited the plant, they found only a few litres of the product had been created.

“We challenged them to make us 50 litres for the expedition. And, this biofuel became what kept us warm, what cooked our food and actually by the end what we survived on”, said Robert.

Communication technologies at the Pole

A key goal of the expedition was to ensure publicity was raised of the team’s achievement, to guarantee that the profile of renewable energies was increased. A feat that was clearly achieved with half a billion people following the group on their online tracker.

But, as Robert succinctly asks, “how the hell did we did we do that?”

With limited technology, the team was able to send audio updates and pictures back to Base. Using Iridium satellite phones and the Iridium Go system the audience were able to receive imagery from the South Pole.

Drones at the South Pole

Getting a birds' eye view of the team was achieved through carrying a drone on the trip. But, in these weather conditions it’s a bit more complicated that flying in your back garden, as Robert explained.

A 360-degree film was also created, all to help target the younger generation.

What can young people do to help? 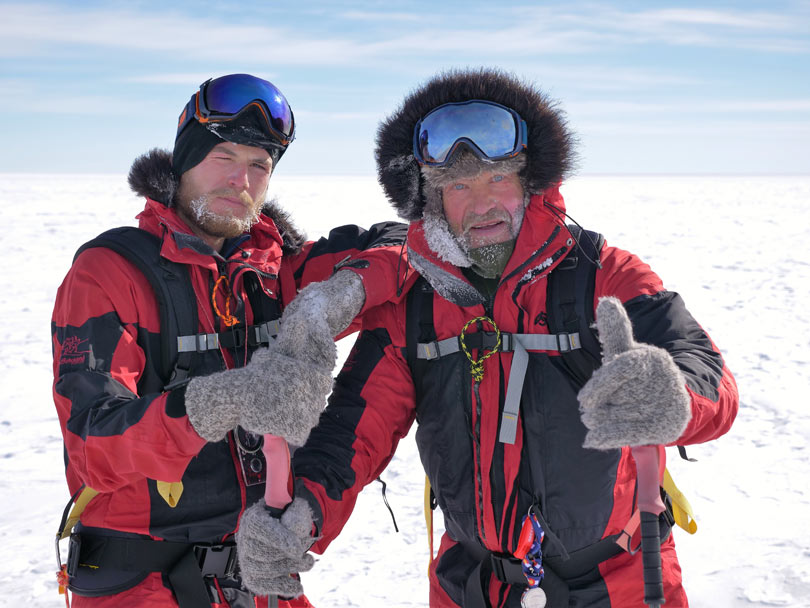 Robert suggest some simple ways to help the environment in your everyday life.

You can switch to a green supply tariff which most of the main suppliers in the UK offer. Or cut down the amount of meat in your diet.

You can also have a solar panel somewhere your life, perhaps as a way to charge your phone.

“The future is there, what we’re asking young people to do is not to look at it negatively”, Robert said, “understand that there will be a transition in energy from fossil fuels, as stand today, gradually towards clean energy.”

Barney describes emissions as the “elephant in the room these days”.

“It’s all great seeing people on Instagram flying around the world and posing in front of all of these amazing places but it takes fuel, it takes energy, it takes power to make these dreams, fun and business happen.”

Hugely proud of his team overcoming the physical and mental challenges of averaging 12 miles a day with nothing but ice and snow in every direction, Barney emphasises that everyone “really needs to take responsibility and clean up after themselves”.

[Read more: How do you recycle your technology?]