The Future of Technology: Robotics in the home and beyond

In the first of a new series on future technology, we look at emerging trends in robotics and the ways robots are permeating many aspects of society.

Robots have been slowly invading our homes for years. The Roombas vacuum cleaners and countless brands of autonomous lawn mowers have taken on aspects of the domestic load for some time, but there’s still a sense that we’re only just getting started.

At CES 2017, the year’s biggest tech show and harbinger of future trends, there were even robots designed for cleaning windows, which everyone knows is the most arduous and thankless task of all.

“The cleaning robots were in full force at CES 2017 and not just the floor cleaners as we know them. There were window cleaners too!” said Jean-Marc Frangos, BT’s Managing Director of External Innovation, who observed some of the developments in robotics at this year’s show in Las Vegas.

Outside the home things are also moving along rapidly. For example, the app-driven food delivery service Just Eat recently announced it is using robots to carry out deliveries to customers’ doors in the Greenwich area. The service is expected to roll out to other areas around the capital and across the UK in due course.

Beyond doing our chores and handling deliveries, robots also have a part to play in the classrooms of the future.

Educational robots may also target more advanced learners. The same affective computing techniques will soon be online learning programmes. The facial recognition tech would be used to shake things up when students look bored or unmotivated.

A report on the future impact of tech on education in Australian tertiary education (via afr.com) said: "Software technology will literally learn to learn, interpreting and responding to learners' most nuanced gestures and emotions – whether they are feeling bored, intimidated or satisfied."

The so-called ‘edubots’ were also highly visible at CES 2017, but BT’s Silicon Valley-based expert Jean-Marc Frangos believes they still have a long way to go before they can be an affective accoutrement to the learning environment.

“They struck me as being the first generation. They’re not that refined yet,” he said. “Some took the form of a walking robot, the size of a toddler. The child interacts with the tablet, can ask the robot to sing, play a quiz or an educational game.

“They were essentially tablets attached to robots, but maybe the kids will engage with it much more because it is a robot?”

A nanny in a smart speaker

For now, it seems, the most immediate growth area remains the home.  Chinese firm Ubtech Robotics launched Lynx, a home robot complete with the Alexa assistant found in the Amazon Echo range. It can dance, tell you the weather and even teach yoga.

Kuri, from Mayfield Robotics, can send you photos of your pets while you’re out, respond to questions, play music while following you around the house and even takes a role in parenting by reading the kids’ bedtime stories. Check out the video below to find out more.

Aristole from Mattel takes nannying a step further. It also has the Amazon Alexa AI built in, but with added language processing tech that can discern pronunciation from younger users. It can soothe crying kids, play them a song, act as a nightlight and has a baby monitor camera built right in.

There are of course, greater, farther-reaching advancements being made. These are robots that aren’t quite ready for the home, streets or classrooms.

Google-owned Boston Robotics, previously a former military contractor for the Defense Advanced Research Projects Agency in the United States, is one of the companies pioneering these efforts.

In February 2016, the company posted videos of its remarkable and frankly terrifying humanoid bipedal Atlas. It is designed to handle tricky terrain and carry out tasks like lifting and carrying boxes. In the video, the robot also withstood bullying from engineers at the company. When the machines rise, as they do in the science fiction films of your nightmares, these guys will have a lot to answer for. 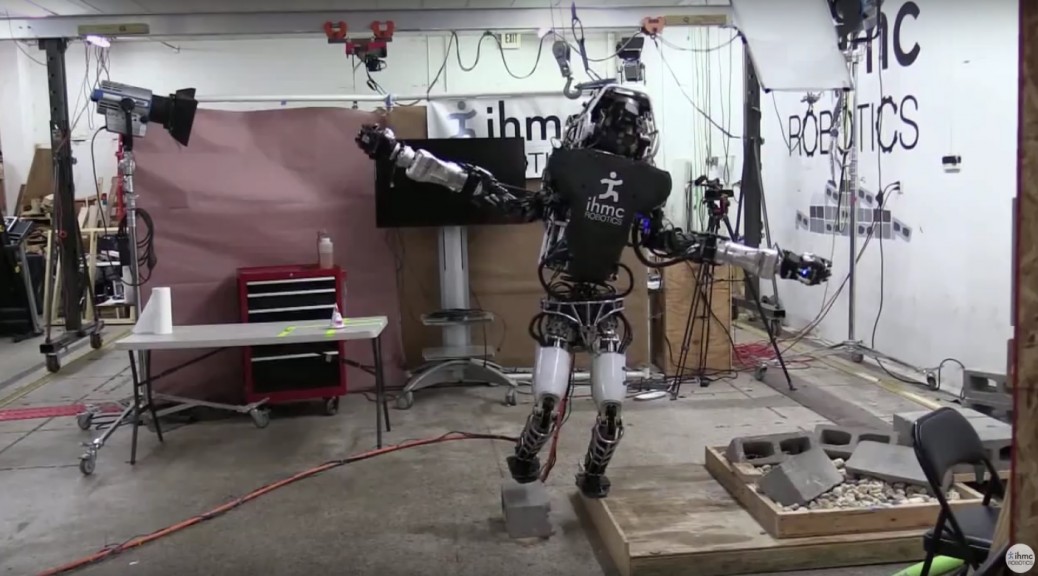 “We expected it to turn around and blast that guy with a laser beam,” Ken Goldberg, a robotics professor at UC Berkeley told Wired.

If that wasn’t scary enough, just this month Boston Dynamics debuted Handle, a 6ft 5in tall robot with both legs and wheels. It can glide around like a roller-blader at speeds of 9mph and can even make four-foot vertical leaps over obstacles. Perhaps robots like these should remain in the labs and in our nightmares for the time being.