The expedition will forever be remembered for being beaten to their destination by Norwegian Roald Amundsen’s party four weeks earlier, and for the death of Scott and his men on their return journey.

Nevertheless, simply to reach the Pole was an incredible achievement considering the information, equipment and technology available to Antarctic explorers at the time, and the naval officer and his men were revered as tragic heroes in the years following their loss.

Scott’s party carried with them five field telephone sets provided by the National Telephone Company, the largest maker of Ericsson phones outside of Sweden at that time. The company was taken over by the General Post Office (GPO, a forerunner to BT) in 1912, while the expedition was still in Antarctica.

The phones were all enclosed in wooden boxes for ease of transport, and the handsets were made from aluminium and Bakelite. The system was installed by the men of the expedition, using the National Telephone Company’s instruction manual.

600lbs of wire, transported on drums, was used to connect the phones. The wire was also made from aluminium, chosen for its light weight; no insulation was used as it was considered unnecessary in the snow and sub-zero temperatures.

The manual shows that the primitive phones operated like walkie-talkies, with a button on each handset which the user would press when they wanted to talk – they could not speak and listen at the same time – and calls had to be scheduled at specific times. 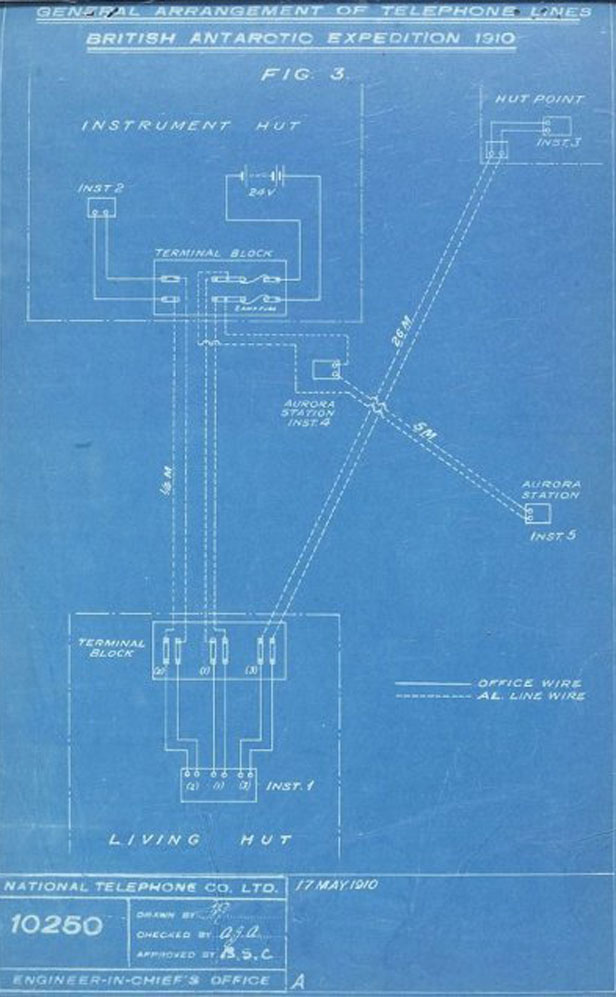 The phones were nonetheless a vital part of the expedition and were largely considered to be a success. A letter from expedition meteorologist George Clarke Simpson describes the phone system as “satisfactory in every respect” and used to connect two camps, Cape Evans and Hut Point, as well as in scientific experiments carried out by the party.

[Read more:Remembering Apollo 8 and how BT helped send TV pictures from the moon to Earth]

Simpson’s letter goes on to explain that the phones were less effective later in the year when sunlight was at its strongest, causing a loss of insulation.

“It was possible however to use the telephone between evening and early morning right up to the point that the southern party left Hut Point for the Pole,” it continues, “and I spoke to Capt. Scott for the last time over the wire.”

The letter concludes: “We often expressed during our stay in the south our gratitude to the staff of the National Telephone Company for the useful gift they made to us.”

Scott’s reputation suffered somewhat in the wake of new research into the exhibition being published toward the end of the 20th Century, which questioned his planning and organisational skills and characterised him as a ‘heroic bungler’.

Subsequently, new evidence came to light which revealed that Scott’s written orders that the returning party should be met with dog sleds – which may have saved them vital days in their attempt to reach camp in appalling weather - were not adhered to.

Read more: How telecoms helped police catch a murderer for the very first time - in 1845.