As we commemorate 100 years since the end of the first World War, we look at the role technology played.

World War I is often referred to as the first modern war. While this assertion centres mainly on the primary use of aircraft, tanks, submarines and advanced weaponry in a major conflict, the emergence of widespread communications technology played an equally crucial role.

BT, in its previous incarnation as the General Post Office (GPO), played a significant role in the advancement of some of this technology. More than 200 items of special telecommunications apparatus were produced, including telephones for gun-spotters and anti-aircraft headsets used by balloon operators. 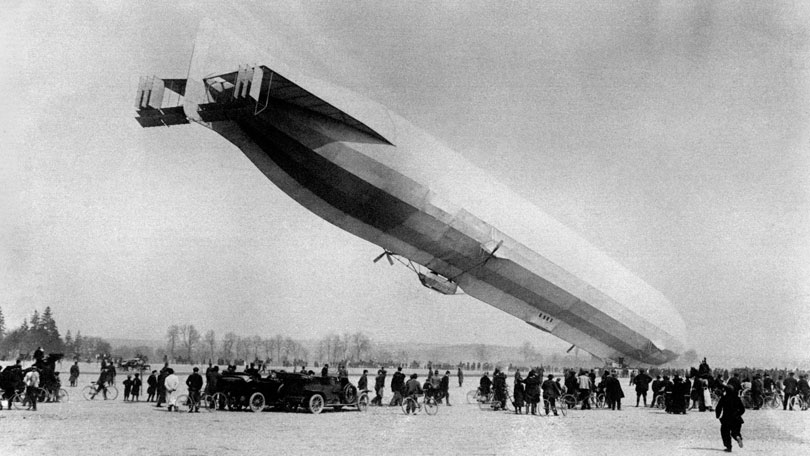 Most people are aware that World War I saw the creation of the Royal Air Force as the Royal Flying Corps, but the widespread use of fighter and scout planes would have been less effective without innovative communications technology.

In 1918, the development of a new flying cap, incorporating a telephone that enabled pilots to keep their hands on the stick without having to pick up a handset mid-flight. An innovative design included a ‘throat microphone’ and double head receivers. It still looked really cool too!

The Engineering Department of the GPO – which eventually became BT – played a huge role in defending the home front from Germany’s feared Zeppelin airships, which killed over 500 people in Britain during the conflict.

The map below, which  shows routes Zeppelins took on the raid of May 2 and 3, is from Sir William Slingo’s report. Slingo was Engineer-in-Chief at the GPO. 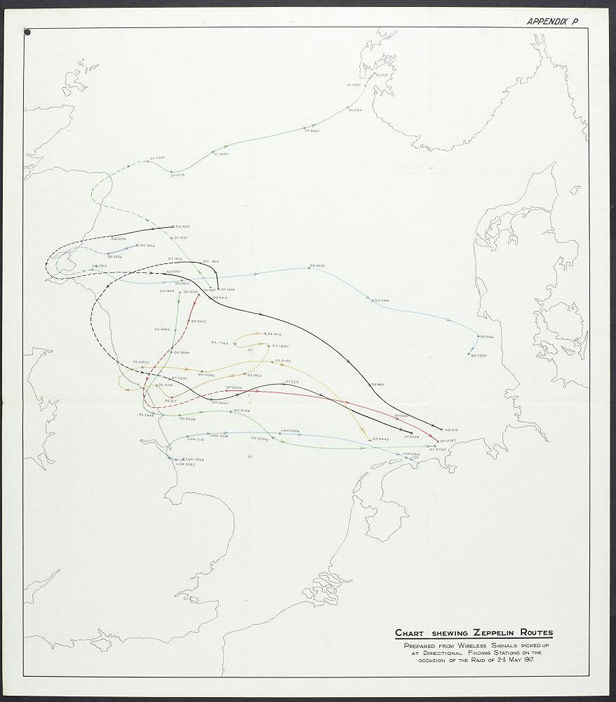 The Engineering Department provided the equipment that enabled the interception of the wireless signals that these and other aircraft used to navigate. Once the positioning was confirmed, the location was wired to the Department of War.

Dawn of the radio age

During the early skirmishes, communications were predominantly wired. Horses dragged thousands of miles of cables across the landscape to establish contact between the frontlines and headquarters. However, lines were heavily targeted by the enemy and often damaged and also susceptible to easy interception. 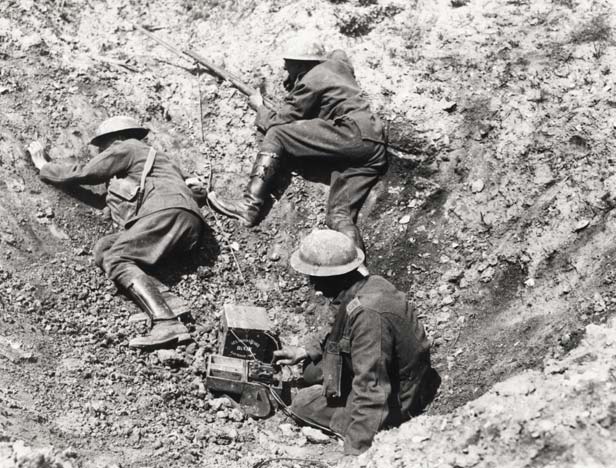 The Army tried using  longwave wireless sets, and although these were huge and required two or three men to move, the breakthrough had come. Radio operators could quickly and accurately warn frontline troops of an incoming attack giving them time to prepare by putting on gas masks.

Technology improved rapidly, thanks largely to the British government setting the Marconi company to work on making the solutions more portable and, eventually, enabling voice transmissions as well as code.

Balloonists armed with telephones became crucial aerial observers during the conflict. In his book Eyes All Over the Sky: Aerial Reconnaissance in the First World War, James Streckfuss writes: “The effective use of kite balloons equipped with telephones by the Royal Naval Air Service… demonstrated the effectiveness of a direct link between the artillery and an aerial observer. Army commanders learned that the balloon observer’s ability to talk directly to a battle commander made him the least the equal of ground-based forward observers.”

The Engineering Department of the General Post Office also provided assistance in implementing sound ranging equipment. Developed by Lawrence Bragg of the Royal Horse Artillery, the idea was to record the boom with an array of microphones to pinpoint the location of enemy fire. The tech was cited as ‘vital’ in the British victory at Amiens in 1918.

In a letter to the Postmaster General (below), the Head of the British Armies in France, General Douglas Haig, said the tech had been of “material advantage in furthering military operations”. 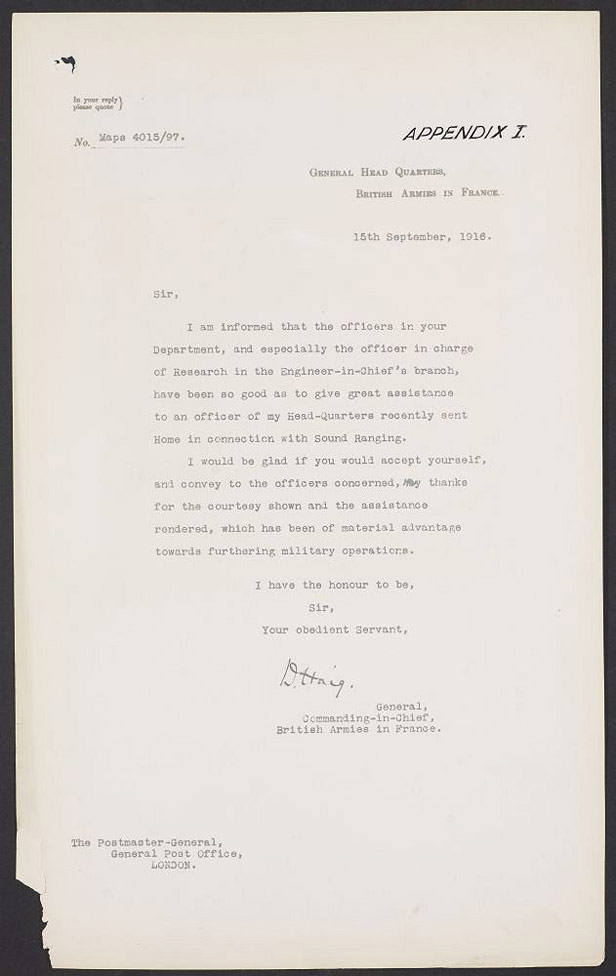 The laying of communication cables by post office vessels was imperative to the war effort. During these perilous undertakings, junior officers had to take on much more senior roles. In a letter to the Treasury requesting substitute pay, the General Post Office explained how junior officers often took on the duties befitting commanders or chief officers in the services.

“During the war they have performed duties more resembling those of naval officers than Post Office officials,” the letter explained.

They weren't the only GPO heros. On the night of Tuesday, August 8th, 1916, zeppelins appeared off the coast of Northumberland and visited Whitely Bay at about 1.00 am. on the following morning.

Several bombs were dropped in the near vicinity of the telephone exchange, one, within 50 yards of it, completely wrecking an adjacent building and causing other damage. The windows of the telephone exchange, where two operators were busy carrying on their accustomed duty, in response to the requirements of the situation, were blown in, the lights extinguished, and the whole of the indicators fell as a result of the concussion. The air was filled with dust from the debris of the demolished building and bombs continued to be dropped in the neighbourhood.

The two operators, Mrs Mary Alice Binns and Miss Lilian Storey, after regaining their composure, lighted the emergency lights, restored the indicators, and continued to attend at the switchboard. Their courageous action in the interests of the community at Whitley Bay was ultimately recognised, and they duly received the medal of the Most Excellent Order of the British Empire for 'displaying great courage and devotion to duty during air raids.' - History of the Telephone in the United Kingdom' – Baldwin

While the dawn of the radio age revolutionised warfare, the ability to shut down enemy communications played an equally significant role on the home front. In times of emergency, for example a German invasion, it would have been possible for the Engineering Department to disable swathes of the communications infrastructure across Britain, thus preventing occupying forces from using it.

[Read more: Did SOS really stand for ‘save our souls’? 5 amazing facts about the distress signal] 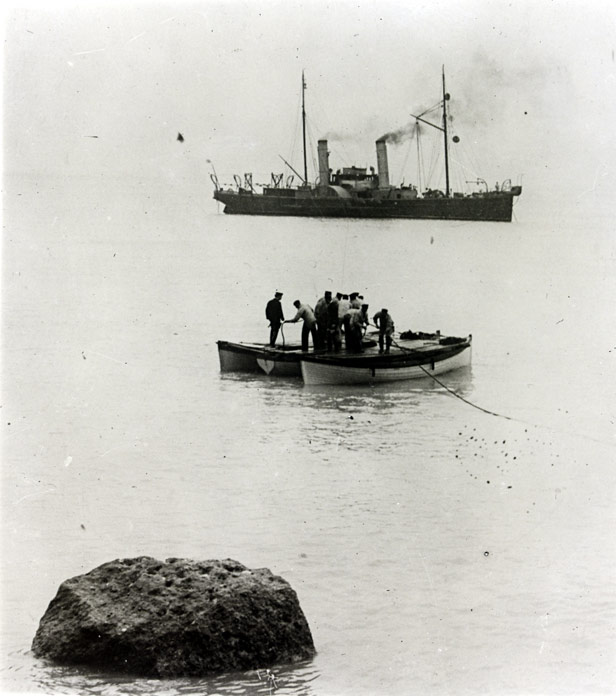 Prior to that, it had also been necessary for the General Post Office cable ship ‘Alert’ (above) manned by Engineering Department, to sever the communication lines between Britain and Germany prior to the declaration of war.

It’s important to consider the role electricity played in advancing conflict communications. Battleships, for example, could now use more sophisticated signalling lamps to communicate with each other and the shore rather than flares.

The outbreak of war brought women into male-dominated professions, particularly in the communications sector. Traditionally employed as secretaries, the need for extra bodies meant women took on roles as switchboard operators. They proved so proficient that the Engineering Department soon proposed an all-female night staff. 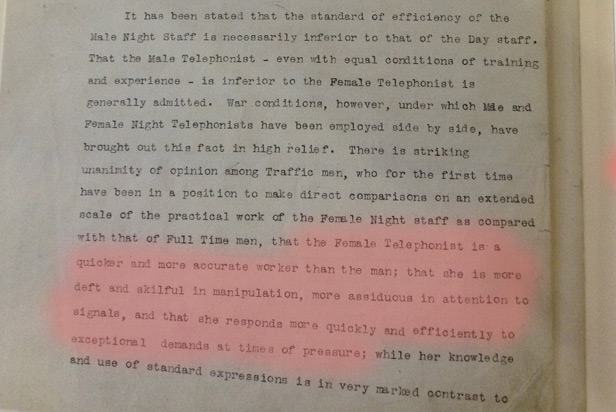 This above report sits in the BT Archives and eschews the virtues of Female rather than Male Night Staff as being a ‘more accurate worker than the man.’

For more information BT Archives has collaborated with the National Archives and the Museum of Science and History.