11 people who made the internet possible

Find out about some of the online pioneers that helped to usher in the information age, enabling us to view this very page and billions more.

On 6 August 1991, the World Wide Web – the brainchild of British computer scientist Tim Berners –Lee would go live with the publication of the first website.

While he is justly recognised as the forefather of the WWW, which is centric to so much of our online activity, it’s a commonly held misconception that Sir Tim invented the internet. In fact, the seeds of the internet as a whole were planted 30 years earlier.

Here are some of the people behind the modern internet – and the inventions that made this revolutionary communications tool possible.

Leonard Kleinrock developed the mathematical theory of packet switching networks while studying at the Massachusetts Institute of Technology (MIT) between 1960 and 1962. This technology involves the sending of small pieces of information from an origin to a destination, which came to be a foundation for the internet as we know it. Kleinrock’s research and future work also played an influential role in the development of the ARPANET. Which brings us to this man…

While Berners-Lee is known as the father of the World Wide Web, Lawrence Roberts is one of those folks acknowledged for siring the internet as a whole. Building on Kleinrock’s packet switching technology, Roberts designed the ARPANET, an advanced research project on behalf of the US Department of Defense. The idea behind the project was to interconnect computers around the nation, and in November 1969 the first successful communications were sent from a computer at the University of California in Los Angeles to one at the Stanford Research Institute – 350 miles away.

Another pair of big time internet legends are Cerf and Kahn. They created the Transmission Control Protocol and Internet Protocol (TCP/IP) technology, which together became known as the Internet Protocol Suite. This underpinning tech, developed in the mid-Seventies, handles all communications sent over the internet via the likes of HHTP and FTP. The TCP element handles the reliability of the data sent from one IP address to another. Listen to them discussing the internet below.

Send any emails today? Well, you can thank ol’ Ray for that. He was behind the idea of connecting an individual user name and a domain name with an @ symbol to send personal communications to individual internet users.  Another ARPANET alumni, Tomlinson sent the first email in 1971 – a test message to himself which, he says, was “something like QWERTYUIOP.”

His contribution to email didn’t end there. His Internet Hall of Fame page reads: “Tomlinson was also lead in developing the required services in network electronic mail, including defining a place to put inbound email on the user's machine, developing a mail transport agent to move email between machines, creating a protocol for moving email between machines, setting a standard format for email messages, and designing a tool for creating and reading email.”

When you reached this page, you may have typed in BT.com. That’s a domain name, which is much easier than remembering the real TCP/IP addresses of the sites you visit on the web. The first domain name was symbolics.com and was registered in 1985. 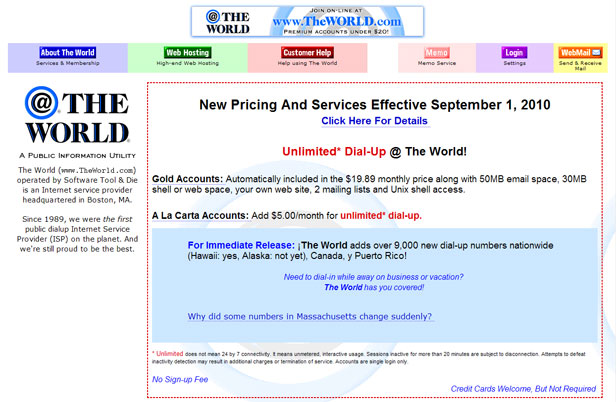 In the early days of the internet, only governments, universities and corporations were online. Home computers were connected to the mains, but in most cases, nothing else. Barry Shien changed this by introducing The World (above), the first commercially available internet service provider in 1989, which allowed dial-up access to the information superhighway. He charged $20 (about £12) a month.

Perhaps the most widely acknowledged web forebear is our very own Knight of the Realm, Sir Tim Berners-Lee. In 1990, he created HyperText Markup Language (HTML), which is still used to create most electronic documents that appear on the web.

Just a year later, on August 6 1991, his idea for the World Wide Web would bear fruit as he placed the first website online. The page, which offers details on the project and a guide to searching the web for information, can still be viewed here.

Berners-Lee’s founding principle of allowing the internet to be open to all prevented him from becoming the richest man in the world, but that decision gave us the internet we know and love today. 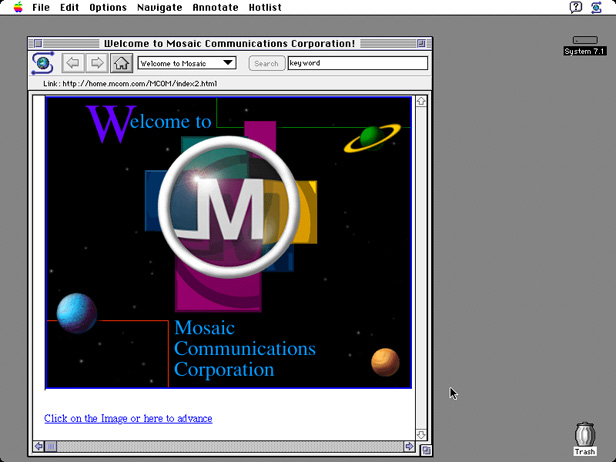 The World Wide Web wouldn’t be much use without a browser to check out all of those lovely webpages, would it? The first widely used browser was called Mosaic. It was developed at the National Center for Supercomputing Applications in at the University of Illinois and was released in 1993. Bina and Andersen – who was only 20 when he co-authored Mosaic – would leave to found Netscape, one of the most important companies of the early web years.