From dial up internet to early websites: 19 scenarios from the early days of the internet

It's over 22 years since BT launched its first consumer internet service. Do you remember these scenarios from the early days of the web?

On March 29th 1996 BT launched its first mass market internet service, BT Internet. For many people it was the first time they could send email, transfer files and use the internet's vast resources to learn.

22-plus years ago BT Internet customers got 2.5Mb of web space and used a 33.6Kbps modem. Today, BT customers get up to 1000GB online storage with BT Cloud and can enjoy speeds of at least 100Mb with BT Plus fibre broadband.

[Read more: 10 ways broadband has changed the way we live] 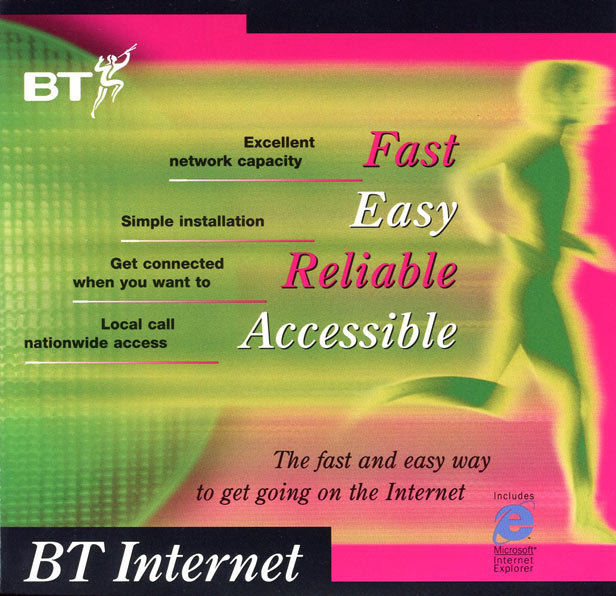 Can you actually imagine life without the internet? Or Wi-fi? Or HD live streaming, Wikipedia and the plethora of social media that includes Twitter, Facebook, Tumblr and Instagram? Here are a few things you might remember if you used the internet in the noughties.

1. The frustration of getting disconnected every time the phone rang

In those pre-mobile phone days you had to use your landline for broadband access.

A dubstep sound combining screeches, crackling, beeps and other unidentified noises that lasted for about 30 seconds until you were finally connected to the world wide web.

With a very helpful button on the left that explained how you could use the internet. While Netscape may have been the original web browser, it was IE that had browser monopoly for years until Mozilla, Google and Safari came along. Read more about the web browser wars.

4. When you discovered the joys of instant messaging with MSN Messenger

5. Those moments when your patience was seriously tested every time you downloaded something

Those who tried downloading anything in the 90s truly understand the meaning of patience. 39 years for a download?

Back in the day, you’d wait an age just for an image to load on your webpage.

7. Saving your downloaded information onto 3-inch floppy discs that quickly ran out of memory

Square-shaped discs that had only 1.44MB to store all your downloaded information? No wonder you had drawers full of them.

8. When you became worried about cyber terrorists after watching The Net

Not to mention you could order pizza online, like Sandra Bullock. Some of you geeks might even remember that tiny “pi” symbol on the lower right-hand corner of the Mozart’s Ghost homepage.

9. When you spent your pocket money at internet cafes

For those who didn’t have internet at home.

10. When you watched You’ve Got Mail and dreamed about meeting your soulmate on the internet

You discovered the internet was really good at connecting random people – like “Shopgirl” and “NY152″.

11. And Friends Reunited became a useful tool for tracking down high school crushes

Although their homepage looked quite tacky.

12. When you thought match.com was the answer to all your love life problems

This popular US-based dating service gave hope to those of us who were single and ready to mingle.

13. When your LinkedIn profile used to look like this

We also discovered we could connect with like-minded professionals.

14. When you thought Mark Zuckerberg would be the next Bill Gates

Back then, we knew him as the Harvard genius that created “the facebook” and took our virtual socialising to a new level.

15. When Alta Vista was your go-to search engine

We all became more well-informed thanks to Alta Vista – although it wasn’t as intuitive as Google is today. The American web search engine beat its competitors (remember Ask Jeeves, Lycos, Excite, WebCrawler and InfoSeek?) by a long margin when it indexed around 20 million web pages and really revolutionised how we used the internet.

And a new adjective “googled” was born, as well as intuitive searching and SEO.

17. When No 10 Downing St decided to have its own website

If you were interested in what then-Prime Minister John Major was up to, you’d now know where to look. This site, which was launched in 1996, included a history of the PM’s official London residence and a tour of the State Rooms.

18. When Napster made online music free

If you had a computer with internet, you probably came across Napster – and downloaded all your favourite songs for FREE, until piracy laws were put in place and it became illegal.

19. When the most evil thing you could find on the internet was pop-up ads

These days it’s internet trolls, but back in the day if you had to name one thing you hated about the internet, it would unequivocally be annoying pop-up ads.

[Read more: The internet time machine - how your favourite websites used to look]